Two Bronx brothers—one of whom is a former teacher—were arrested by the Federal Bureau of Investigation (FBI) and the NYPD for attempting to build bombs, New York City officials announced on Thursday night.

On Thursday morning, the FBI arrested Christian Toro, 27, a former teacher at a charter school in Harlem, as well as his twin brother, Tyler Toro, according to the NYPD. Christian is said to have paid students $50 an hour to take apart the fireworks and take out the explosives inside, according to The New York Daily News.

They both pleaded not guilty, Berman said. Christian’s bail hearing will take place on Feb. 21, but no bail hearing has been set for his brother yet. A preliminary hearing is scheduled for March 19.

“The brave men and women of the NYPD and of the FBI have done extraordinary work and in this case likely saved many, many lives,” de Blasio said.

O’Neill maintained that they cannot go into “too much detail” just yet.

“This case is in its very early stages, and there is much detail we cannot provide,” he said.

On Dec. 4, police received a call about a bomb threat made to the Harlem school, according to John Miller, the NYPD’s deputy commissioner for intelligence and counterterrorism. The NYPD Intelligence Bureau’s Lead Investigative Unit subsequently kicked off an investigation into the source of the threat. A 15-year-old student was arrested in connection with the threat.

As part of the probe, they discovered that Christian had resigned from the charter school, which caused investigators to follow up, Miller said. Two days later, his brother turned in a New York City Department of Education (DOE) laptop that had been assigned to Christian while he was teaching to the Board of Education (BOE)

This week, the JTTF was able to get probable cause to seek a search warrant from the U.S. Attorney’s Office in the Southern District of New York and a federal judge to go to the Toros’ apartment in the Bronx following interviews and developments in the case, Miller added.

In the course of that search, which started on Thursday morning and went on through much of the day, more than 30 pounds of chemicals—which taken together in certain combinations constitute “explosive precursor materials”—were recovered, the NYPD official said.

The Toros were taken into custody by the FBI and charged with possession of explosive precursors and giving explosives to minors, Miller explained.

The charges are connected to allegations that at least two students who were present in the Toros’ apartment emptied explosive black powder from fireworks, harvesting them from fireworks and putting them into separate containers, he noted.

In addition to explosive materials and simulated weapons found in the course of these search, Miller told reporters that officials found Tyler’s diary, which had notations about a so-called “Operation Flash.”

The diary contained statements about discarding and doing away with physical evidence, while other documents had statements such as, “Under the full moon, the small ones will know terror.”

“I would like to underscore and underline again that with these two individuals in custody, with the people we’ve interviewed, with the evidence we’ve seen so far, there is no reason to believe at this point that there is any remaining threat to New York City or any school,” Miller said. 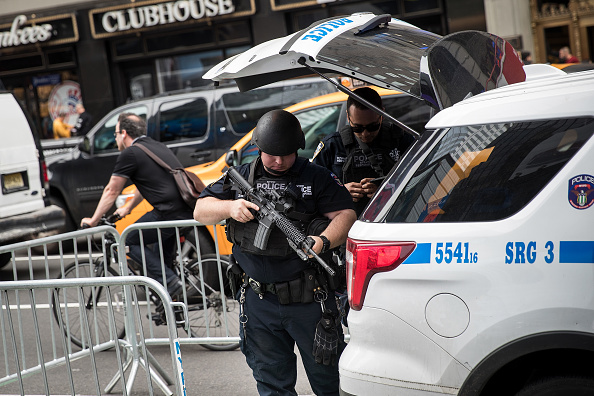