New York City could face up to $700 million in potential federal funding cuts from the Trump administration, along with more than $750 million in cuts from Albany.

The cuts also include a $200 million loss in capital funding because Trump’s tax law reduces investor interest in the Low Income Housing Tax Credit, an affordable housing tax credit. And as of Jan. 1, the city lost its ability to refinance debt on tax-exempt bonds, which comes out to a loss of $100 million annually.

The mayor projected cuts could surpass $700 million after the president releases his budget this month.

De Blasio said the “plus side” is that members of the U.S. House of Representatives and the U.S. Senate fought against the repeal of former President Barack Obama’s Affordable Care Act, saving health insurance for 1.6 million New Yorkers and “lessening the blow” to NYC Health + Hospitals.

“Compared to what I would have thought a year ago, the budgeting process—although it’s been abnormal, dysfunctional—it has yielded less negative for New York City than we originally feared to date as the continuing resolutions basically froze things in place,” he said.

But he argued there is “no guarantee of that being what happens next.”

“No one knows what’s gonna happen in the next midterm elections,” he continued. “So it could be the status quo, it could be a big change, but what we do know is the president is in place for three more years, and some of the worrisome realities around budgeting could certainly [be] exacerbated.”

And the mayor did not include funding in the budget for the Metropolitan Transportation Authority (MTA), telling reporters he is not open to increasing the city’s contribution to the MTA “under current circumstances.”

“This budget process proceeded against a backdrop of tremendous uncertainty, particularly in Washington and to some extent in Albany as well, and we said to ourselves as we embarked on this process that we would have to be very careful and very sparing in the actions that we took, but that we would make decisions based on a very simple notion and it’s one I articulated in my inauguration speech,” de Blasio said. “The question is: What will help us, the fairest big city in America? This is the central notion.”

“While closing a $4.4 billion gap, this year’s budget sends $16.5 billion in aid to the city—more than 40 percent of funding awarded to all local governments—and a half billion dollar increase over last year,” Peters said in a statement. “The state’s budget includes a $248 million increase in school aid, $212 million more for the state takeover of Medicaid, and $60 million in additional tax revenue—calling this significant increase a cut is disingenuous and the city should check its math.”

The MTA blasted the mayor’s decision to not include funding for the MTA.

“The subway is the lifeblood of New York City and it’s a shame the Mayor continues to show a complete unwillingness to help fix it,” Jon Weinstein, an MTA spokesman, said in a statement.

And the $750 million added to FY18 and FY19 since the November financial plan is offset by savings.

The budget includes new investments in the areas of education, housing and public safety. Those investments include expanding the 3K for All initiative that seeks to bring free, full-day early childhood education to all three-year-old children.

It also includes an additional $200 million in capital funding to improve heating systems at 20 New York City Housing Authority developments over the next three years and $12 million to equip all 18,000 police officers with body cameras by the end of the year—a year ahead of schedule.

De Blasio said the investments “are very modest” given the uncertainty the city is facing with funding sources.

“We have to ensure that when we make these spending decisions, we’re doing it wisely and prudently for the future finances of the city,” Johnson said.

This story has been updated to include a statement from Cuomo’s office about the lack of funding for MTA in the city’s budget. 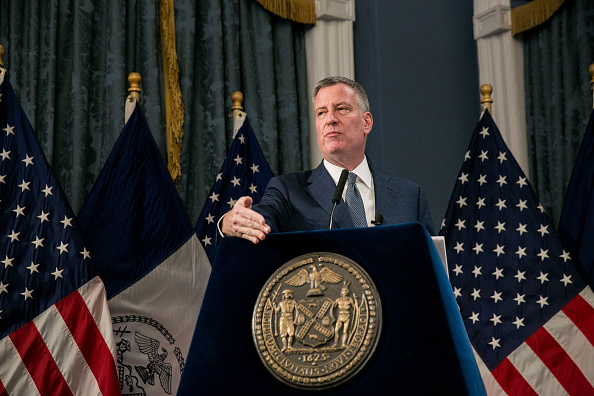