New York City has launched a new web-based portal that provides information and resources to domestic violence survivors, as well as for individuals who want to help them.

The new portal, NYCHOPE, includes a resource directory enabling survivors to locate services within their community, information about healthy relationships and signs of abuse and a useful guide about how to help a friend or family member experiencing abuse. It also has tech safety tips, a quick-escape feature for users to enhance their safety and connects users to information about the city’s five Family Justice Centers and other city agency sites.

“As far as I know, certainly the only city of this scale [with this portal],” McCray told Observer following the launch at the Manhattan Family Justice Center in Lower Manhattan on Thursday afternoon. “We are the largest urban area that I know of that has a website portal like this and the range and number of services that are provided for domestic violence survivors.”

McCray said she has been interested in the issue for decades, noting that she volunteered at a center for battered women, who shared their stories with her.

“When I became First Lady, I knew that it was one of the areas that I was going to focus on,” she continued.

And she noted that because the issue affects all individuals, it is key to provide services across all city agencies.

The city’s Department of Information Technology and Telecommunication (DoITT) developed and designed NYCHOPE in conjunction with the Cornell Tech campus, which officially opened in September 2017.

During the 2016-2017 academic year, Cornell Tech students interviewed more than 100 Family Justice Center clients to evaluate the manner in which technology can support their needs.

Dr. Herminia Palacio, deputy mayor for health and human services, called for more outreach for information about and conversations on domestic violence.

“This is a problem that often hides in plain sight but it’s everywhere, and so many people still don’t talk about,” Palacio said. “It happens in every kind of relationship, but people tend to associate it with intimate heterosexual partners. It can involve physical violence but also psychological abuse, economic coercion and more.

Benjamin Tucker, the NYPD’s first deputy commissioner, said that when he was a young cop in Brooklyn, radio cars frequently responded to homes of people who suffered from domestic violence and that they never made arrests “because that wasn’t the culture.” He argued the city has made progress since the 1970s.

“We have a situation where we have the portal, we have this new campaign and we still have lots of work to do, but the truth of the matter is we have come a long way,” Tucker said.

The city also announced the “We Understand” ad campaign—its first domestic violence awareness campaign in more than a decade.

“This gives survivors voice and the knowledge of where they can turn to if they need help,” Singh said. “They can go online. They can make a call. They can use their smartphone. All of this is needed in an abusive relationship because you never know when your abuser is looking.”

“You need to have this information at your fingertips,” Cumbo said. “It needs to be accessible.”

Queens Councilman Donovan Richards, chairman of the Council’s Committee on Public Safety, plans to hold hearings with the NYPD to explore additional actions the city can take to tackle domestic violence.

He noted that when he visited a shelter in his district recently, a young woman approached him about housing opportunities after she and her child left their home in the middle of the night because she was suffering from domestic violence.

“It would have been great in that moment if she had information or some portal that she could have gone to to really look at where all of these different services were being offered,” Richards said. 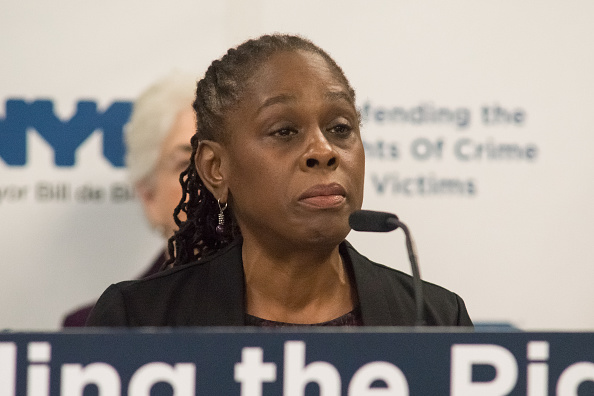