State Senate Majority Leader John Flanagan, a Republican, recently announced a revised policy for preventing discrimination and harassment that bolsters protections but also states that falsely accusing someone of misconduct is a “serious act,” according to Gotham Gazette.

Senate Democratic Leader Andrea Stewart-Cousins took issue with the change, saying that the policy’s emphasis on punishment for false accusations “is exactly the type of intimidation that has silenced so many through the years,” Gotham Gazette reported.

And on Wednesday, POLITICO reported that the state government spent at least $6.4 million to settle more than 1,000 sexual harassment cases over a six-year period.

Jessica Ramos, who previously served as director of community and ethnic media for Mayor Bill de Blasio, is challenging Queens State Senator Jose Peralta, a member of the Independent Democratic Conference, a group of Democrats in a power-sharing agreement with the Senate GOP.

She told Observer they want to ensure that the state government is not using taxpayer dollars to cover sexual harassment settlements.

“That’s not the appropriate use of our tax money,” Ramos said at a rally against the policy at City Hall on Thursday morning. “Tax money should be going to social services. We also are asking for them to stand up for women and other people who have suffered sexual harassment because we’re seeing explicitly in that warning to intimidate accusers that what they’re really doing is protecting sexual predators.”

She called for a work environment in which workers feel protected as well as a clear policy and process to which everyone adheres.

The revised policy gives both the victim of sexual harassment and the person they’ve accused 15 days to appeal to Senate lawyers after they reach a decision; whereas, the Assembly gives them 30 days.

“In Albany, the Assembly has a longer process than the 15 days that the Senate has,” Ramos continued. “So what we want is to make sure that people who are working for the state now and people who are gonna work for the state Senate in the future feel protected and feel that if they are to suffer through this type of situation, that they will be heard and that we will respect their rights as a victim.”

“I don’t understand why there was so much secrecy… why did they only see just the final draft and not the revisions?” Robinson said. “So, I have a real problem with that.”

She argued the policy change is in stark contrast with the #MeToo movement started by activist Tarana Burke.

And she wondered how the Senate will determine whether someone is lying about an accusation.

She pointed to the impact the policy would have on Erica Vladimer, a former state Senate staffer who has accused Bronx State Senator Jeff Klein, who heads the IDC, of sexual misconduct. Klein has denied committing the act.

Alessandra Biaggi, who is challenging Klein, blasted the finding that the state paid more than $6 million for sexual harassment settlements.

“It is unacceptable that so many people—most of them women—have been subjected to a work environment that is rife with unwanted behaviors while serving the people of New York,” Biaggi said. “When I heard about this report, I thought about not just these 1,000 individuals but all of the future staffers who, unless something changes, find themselves in the same situation. We cannot let that be the case.”

“She [Stewart-Cousin] would never agree to any language that would intimidate victims from coming forward about sexual harassment,” Jackson said. “And we need to make it easier, not harder, for victims to come forward and harder for perps to hide. No person on any job should be a target of sexual harassment, women men or LGBTQ, and the workplace in government must set a positive example.”

“While the IDC fights for stronger sexual harassment law, it’s sad that political opportunists like the Working Families Party, and candidates running against fellow Democrats hijack such an important issue for political gain,” Giove said in a statement.

A spokesman for Flanagan did not immediately respond to a requests for comment on Thursday. 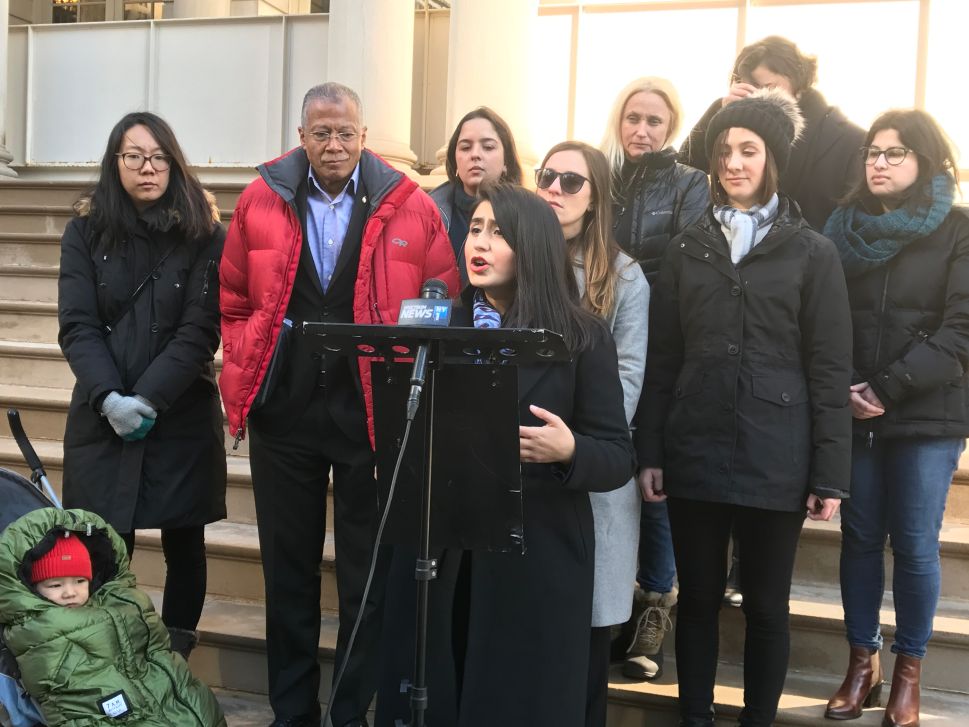