Dumbo’s iconic Clocktower building (home to moneyed types, like Olivia Palermo) clocked in last year with the sale of its $15 million penthouse, the highest price for a condo in the borough’s history—bada bing, bada Brooklyn.

Even with its trophy apartment off the market, the waterfront neighborhood has a few more impressive debuts in the works: The Wing, a women’s only work/social space, will open in a forlorn tape factory this month, and Soho House Dumbo will soon take over a Civil War-era building that once processed roasted coffee beans. Indeed, Dumbo’s industrial, double-height spaces are just the right size for companies with big personalities.

The consequence of coveted waterfront, of course, is that it’s quick to dry up. Joining the mad rush to Dumbo is a pair of designers responsible for bonafides like Russ & Daughters, Lilia and Grand Army bar, recently opened a joint that, in their eyes, lets Dumbo shine all on its own. Nico Arze and Matthew Maddy, designers of the neighborhood’s waterfront Celestine restaurant, designed the space around the scenery itself, not the abounding scene—their goal was to capture a slice of Dumbo, without downplaying the waterfront view.

So naturally, we tapped the talented team for their perspective on Brooklyn’s neighborhood of the moment. Here are their picks on where to eat, drink and shop in Dumbo.

Where to Start (and Sip)

“I would say the ideal way to approach Dumbo is from East to West,” says Arze. “Start all the way at the edge of the Brooklyn Navy Yard by having a drink at Kings County Distillery.” The first of its kind to open in NYC since prohibition, this distillery isn’t actually in the neighborhood (it’s nearby in the Brooklyn Navy Yard), but it’s the first project that actually led Arze and Maddy to the Dumbo area, as they designed the distillery’s tasting room years earlier. A nip of moonshine or bourbon is a bracing way to start a brisk afternoon stroll and the old-timey, saloon-like tasting room sets the tone for the stylish “““““““day ahead.

“The east side of Dumbo, towards Vinegar Hill from Bridge St. all the way to the Navy Yard, is very attractive, especially the roads around the Con Edison plant,” Arze notes. “The streets are always empty and it feels like an abandoned city—like fallout.” Walk west along Street towards the thick of Dumbo, and along the way, Damascus Bakery (which has baked here since 1979) fills the stroll with notes of fresh bread. Along the street, 19th-century Belgian blocks pave the way past Valrhona, a chocolate cooking school, towards the bustling intersection where, down Jay Street, northern views open wide to the East River.

Refreshing the scene, John Street Park, a new plot of waterfront parkland connecting to the reimagined Brooklyn Bridge Park, sits at the bend of the East River. “We really like what the city did with the park, by planting native plants and allowing them to grow freely,” says Arze. It’s an altogether new vantage, extended as part of the waterfront’s revitalization, where cyclists pedal across small pedestrian bridges over a tidal salt marsh, and an all-around lush layout reclaims a crisp view of the Manhattan Bridge from a 13,000-square-foot lawn.

During warmer months, Maddy and Arze recommend bouldering (which, for the uninitiated, is a type of rock climbing) under the Manhattan Bridge at DUMBO Boulders. It happens to be the largest outdoor bouldering facility in North America. Better yet? “Jane’s Carousel is unbeatable!” says Arze of the revolving 1922 chariots and horses that took decades to restore and now charm the waterfront from within a Jean Nouvel-designed transparent cube.

Smack Mellon, one of many art galleries in the neighborhood, is a nonprofit with multi-use spaces throughout a 12,000-square-foot historic boiler house. “It’s a great venue for young, emerging and obscure artists,” says Arze. “We had the privilege of showing once there.” The organization fosters these under-recognized artists, especially women, by displaying their work in a soaring 5,000 square foot exhibition space with 35-foot ceilings.

Empire Stores, meanwhile, is like an anchor to Dumbo’s residents—whether they live or work in the area. Once a brick storage space for staples like roasted coffee, the 19th-century building has been revitalized and is now a working complex. It’s a mighty joint, featuring office space for startups, in addition to a range of attractions from cafés and boutiques to West Elm’s flagship and a brand-new, interactive outpost of the Brooklyn Historical Society. On the southern stretch of the building, Arze recommends dropping by Legend Car Company, where the subterranean showroom features an impressive array of ’80s and ’90s sports cars—pick up a 1987 Porsche 911 Turbo in lipstick red, if you can.

As for style picks, Arze and Maddy stick to their eastern mindset at Shibui Japanese Antiques & Furniture, which stocks anything from ceramics used for traditional tea ceremonies to folksy textiles and architectural fixtures, just in case you’re in the market for a latticed, sliding cedar door for four-figures. “Blackbarn Shop, across from Celestine on John Street, has beautiful textiles and artifacts,” suggests Arze. This shop mixes styles and eclectic home-goods from across borders, all sourced from the travels of interior designer Mark and Kristen Zeff.

Sticking to the eastern side of the Manhattan Bridge overpass, tuck into Burrow, a café and bakery hidden inside the lobby of an office building. Arze recommends their pastries, handmade by Japanese owner Wataru Iwata. A delightful dozen varieties of cookies are baked fresh each day, but Iwata’s specialty is her custom-made desserts, all whimsical and so artfully made (like a sweet sheepdog and a realistic Dolly Parton) they’re almost too pretty to eat. For savory snacks, Arze and Maddy are partial to VHH Foods, a bright and casual joint inside Empire Stores. “They are great, and you can grab wonderful stuff to eat while walking along the waterfront,” says Arze.

Spring for an early dinner at Celestine to catch the sunset; the setting itself, adjacent John Street Park with a straight shot to the river, was the focus of Arze and Maddy’s design. “The central, and welcome, challenge to designing Celestine, was how to live up to the spectacular views of the river, bridges, and lower Manhattan,” explains Arze. “We basically sought to leave the river facing sides of the room raw and unencumbered, and build restaurant’s warmth and character into the open kitchen and bar area.” In doing so, the space is soft and light with wraparound windows lined in thin, bleached oak panes. Not to distract from the view, the surrounding surfaces are blanketed by bleached white oak wood, from the floors to the ceilings.

The menu, keeping with sun-drenched, coastal vibes, is loaded with Eastern Mediterranean fare. As for the perfect order? “I would order the Baba Ganoush, the Manti and the Halibut coupled with a nice bottle of wine from the list curated by our partner Joe Campanale,” says Arze. 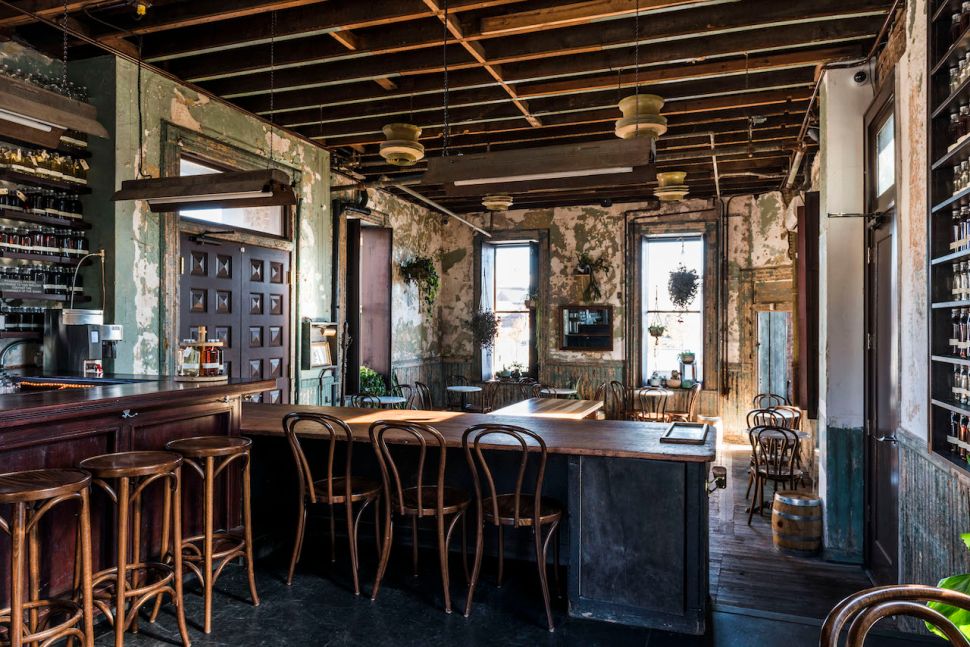