The NYPD will now have to return property it takes from individuals it arrests faster as part of a court-ordered settlement of a lawsuit alleging unconstitutional retaining of personal possessions, such as cash and cell phones.

In January 2016, The Bronx Defenders—which offers innovative and holistic legal services—and law firm Boies Schiller Flexner LLP filed a federal lawsuit in the Southern District of New York alleging that the NYPD’s policy of keeping people’s property without due process after their cases are solved  affects thousands of New Yorkers.

They requested that the NYPD come up with new policies to ensure it is properly releasing personal property.

In 2016, Bronx District Attorney Darcel Clark created the Property Release Unit to modernize her office’s practices of processing and assessing requests to return property vouchered by the NYPD.

As part of the settlement, the NYPD has clarified its policies and broadly disseminated information to ensure that both the public and police officers are fully informed of the proper procedures to voucher and retrieve property, according to the mayor’s office.

The settlement was approved by a federal judge on Monday, according to The Wall Street Journal.

“We are pleased with the resolution of this case,” Austin Finan, a spokesman for de Blasio, said in a statement. “The settlement recognizes the significant improvements made by the Bronx DA and the NYPD to ensure accountability, proper vouchering and timely responses to requests for property as required under the existing law.”

As part of the settlement, the NYPD has agreed to comply with clear rules concerning seizing and returning property and provide people with notice on how to retrieve their property. The police department also agreed to train and supervise NYPD personnel on those mandates, conduct audits to make sure everyone is complying with the rules and submit to ongoing court jurisdiction.

Lieutenant John Grimpel, an NYPD spokesman, told Observer the case is only about vouchered arrest evidence—evidence connected to an ongoing case.

“The NYPD is governed by statute as to when it can release arrest evidence to a claimant,” Grimpel said in a statement. “In short, the district attorney must authorize the release of arrest evidence once it’s vouchered. The claimant has to then present the ‘DA release’ to the property clerk, and only then can we give the property back.”

“Before this lawsuit, property seized at an arrest fell into a black hole of red tape—even when someone’s charges were later dismissed,” Niji Jain, an attorney from The Bronx Defenders’ Impact Litigation Practice, said in a statement. “This dysfunctional and unconstitutional practice disproportionately harms the low-income communities that are targeted by broken windows policing and least able to afford these costly consequences. This long overdue settlement ensures they will no longer face insurmountable obstacles to retrieving what is rightfully theirs.”

The organization argued that personal property retained as evidence should be returned once the criminal case is over unless the government has legal grounds to keep it.

The NYPD has imposed convoluted procedures that make it impossible for people to get their property, according to the lawsuit.

Each of the individual plaintiffs named in the lawsuit fought to get their personal possessions back for at least one year. None were able to retrieve their property until after they filed the lawsuit. They will each get financial settlements, including attorneys’ fees and costs.

The organization said that while it is unknown how much seized property and money the NYPD permanently retains, it pointed to a budget document that states the police department kept $7 million in unclaimed cash and property auction proceeds as revenue in fiscal year 2015.

Clark’s office, which was not a defendant in the lawsuit, voluntarily joined the settlement and agreed to carry out a series of reforms to protect arrestees’ rights.

Eric Brenner of Boies Schiller Flexner LLP said the firm is “proud” to have played a role in ending the practice.

“The constitution is clear that the government can’t hold someone’s property without a legitimate reason,” Brenner said in a statement. “But many of the people being denied their belongings didn’t have the means to hire lawyers to enforce their rights. They lost phones they were still making payments on and rent money they couldn’t replace.” 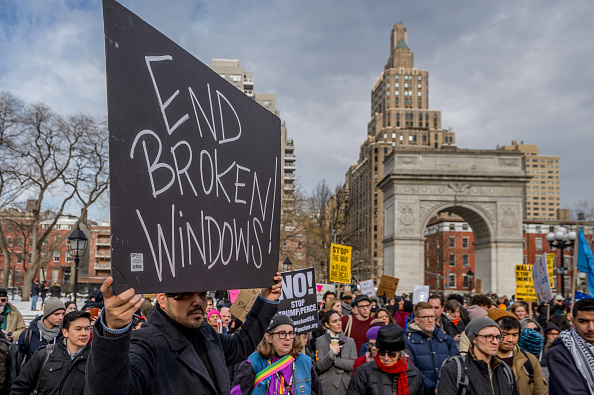