A bomb in Times Square, a dead terrorist leader, a school massacre, and a late-night tweet all contributed to a major shift that propelled an American ally into the arms of its geopolitical rivals. It won’t take long to learn whether the United States’ leadership made the correct call on Pakistan or the biggest diplomatic blunder in the region in nearly 50 years.

Eight years ago, Times Square dodged a major bullet. More accurately, it avoided a massive explosion, as Pakistani-American Faisal Shahzad tried to detonate a bomb deep in the area on May 4, 2010. Thankfully, security personnel stopped the bomb from exploding, as someone alerted the authorities after spotting smoke coming from a vehicle. Shahzad was arrested before he could escape via plane.

Shahzad was inspired by the group Tehrik-e-Taliban. His capture and trial introduced most Americans to this bloody terrorist group, also known as “the Pakistani Taliban,” which operated out of places like Northern Waziristan. Like the Afghan Taliban, they are not friends of America.

A year later, U.S. Special Forces roared into Abbottabad, Pakistan in helicopters to kill Osama bin-Laden, the leader of al-Qaeda, on May 2, 2011. The fact that bin-Laden’s compound was a short distance from the Pakistani Military Academy led to beliefs that the Pakistani regime was complicit in hiding the terrorist responsible for 9/11.

Additionally, some thought the Pakistani government was aiding terrorists after a school massacre at Peshawar. Nearly 150 students and teachers were murdered at this Pakistani school, leading to a huge backlash against Tehrik-e-Taliban within the country. The killings at the school inflamed the public, which motivated the army to go into several regions under terror control to rid the country of the threat from the Pakistani Taliban.

The Rise and Fall of the U.S.-Pakistan Alliance

More than 50 years ago, the United States had a tough choice to make in South Asia. Pakistan and India were fighting a series of border wars, from the Rann of Kutch to Kashmir. Should we side with India, which was militarily stronger and more democratic? National Security Adviser and later Secretary of State Henry Kissinger thought otherwise. His preference was to tilt toward Pakistan. He figured that supporting the weaker side would make the Pakistanis more grateful, getting us a Muslim ally in the Middle East and a connection to China, which had also been helping Pakistan. All of Kissinger’s predictions came true, but the move also drove India into the arms of the Soviet Union. To some extent, this emerging economic power still hasn’t forgiven us for that slight.

During the Reagan administration, America looked the other way while Pakistan developed a nuclear program to counterbalance India’s. Pakistan was a valued ally in helping the Mujahedeen defeat the Soviet troops in Afghanistan. And when President George W. Bush needed a friend after 9/11, Pakistani dictator General Pervez Musharraf was so helpful that his people jokingly called him “Busharraf.”

But that all came to a screeching halt on New Year’s Day 2018. President Donald Trump issued an early morning tweet saying the U.S. had “foolishly” given Pakistan more than $33 billion in aid. “They have given us nothing but lies and deceit, thinking our leaders as fools. They give safe have to the terrorists we hunt in Afghanistan, with little help. No more!”

These words echo Trump’s warning from 2017, when he claimed that there were “safe havens for terrorists in Pakistan” and asked for India’s help in dealing with Afghanistan.

Needless to say, the tweet caught the U.S. foreign policy establishment off-guard, as well as the Pakistan government, which is currently locked in a battle to the death with the very group that Trump alleged they were supporting. Pakistan not only denounced the tweet, but took additional steps to firm up arms purchases and alliances with China and Russia. Not only is Pakistan connecting with the two powers on military and security issues, but economic opportunities as well—help that the U.S. once provided.

The Pros and Cons of Teaming Up With Pakistan

There are benefits to Trump’s policy. If the Pakistani government isn’t dealing with terrorists as effectively as it could, the withdrawal of aid could force it to clean house of agents who help the Tehrik-e-Taliban. This would send a strong message to fair-weather friends in the region and elsewhere that U.S. aid is conditional on results. And it could help Americans build stronger ties with India, a growing power in the region and potential future economic ally.

On the other hand, such moves could weaken the Pakistani government as it battles the Tehrik-e-Taliban, emboldening this terrorist group. The incendiary tweet is pushing Pakistan into the arms of China and Russia, weakening U.S. influence in the region and boosting the power of both rivals in South Asia. And there’s no guarantee that India would link up with America. After all, India has not abandoned its ties to Russia. If India could mend fences with China in its drive to counterbalance American influence, perhaps Russia may play mediator to Pakistan and India. All four countries would be part of a powerful Asian alliance, with American looking in from the outside. While the resulting stability would be nice, it wouldn’t strengthen the United States’ position. Perhaps it’s best to go back to the policy of being the peacemaker in South Asia, attempting good relations with India and Pakistan, before someone else gets that bright idea. 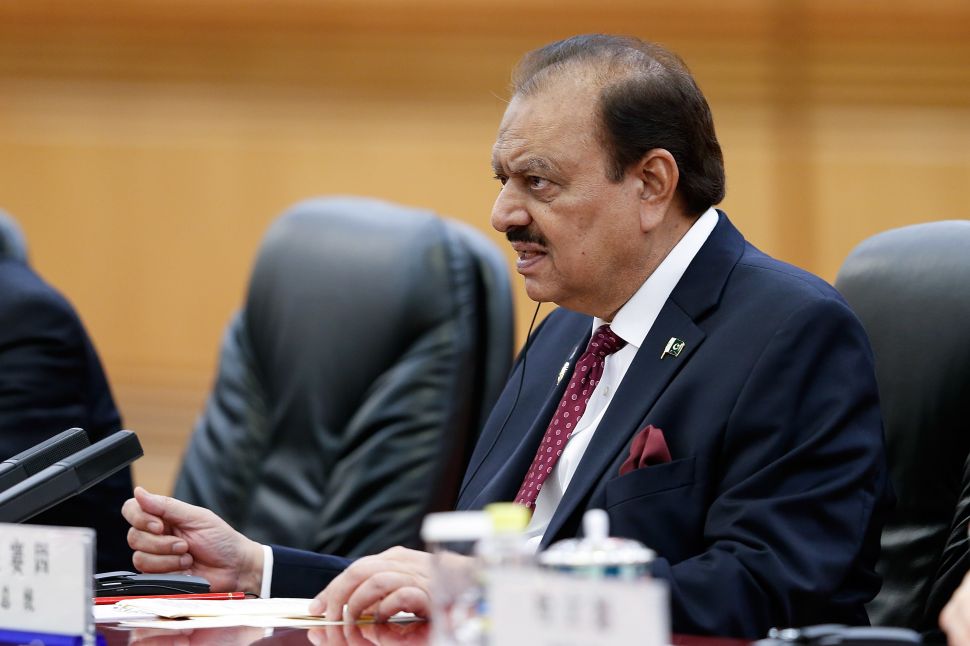