President Donald Trump has his eye on Pennsylvania. Last week, he tweeted that Republicans in the Keystone State should fight all the way to the U.S. Supreme Court to preserve the current congressional map that the state’s Supreme Court recently struck down for being gerrymandered. He visited the tiny town of Coraopolis, Pa. in January and hopes to reschedule his visit to Ambridge, Pa., which was originally scheduled for last week.

Why is Trump wading into state politics and visiting the little hamlets of Western Pennsylvania? It’s more than just an attempt to sway a Pennsylvania district for the GOP in a special congressional election. It’s an appeal to union voters, who were key to his 2016 victory.

Pennsylvania’s 18th congressional district is having a special election on March 13, 2018. Trump won this district by 20 points, and it was critical to his narrow victory in Pennsylvania and the electoral college as a whole. It’s regarded as a very pro-union district; Coraopolis is home to H&K Equipment Company, where Trump spoke in January.

The Union Vote and the 2016 Election

Most unions lined up behind Hillary Clinton in the 2016 election. In fact, some of the biggest donors to her campaign were unions. By the end of the primary, the only two unions that endorsed Trump were the National Border Patrol Council and the New England Police Benevolent Association. But  union members didn’t necessarily agree with their organizations. Even as the leadership touted polls showing that Trump was running behind Mitt Romney in union households, union members started up their own groups on social media in support of the GOP nominee.

Then there was Trump’s and Clinton’s campaign styles. At a conference, I spoke with several professors and former Governor Jim Blanchard, a Michigan Democrat. A professor said, “The big difference was that Trump personally asked for their (union member’s) support. Hillary Clinton never did.”

Blanchard, who was Bill Clinton’s ambassador to Canada, echoed those concerns. He begged Hillary Clinton to come to Michigan and not take the state for granted. He contrasted her strategy of flying into Grand Rapids and flying out again to Bill Clinton, who met with people and visited small towns. Shaking hands and personal appeals to union members help win votes more than big donations given by organizations.

The rest is history. Trump pulled off a massive upset, despite losing the popular vote, by winning several Midwestern states: Wisconsin, Michigan, Ohio, and Pennsylvania, all of which Barack Obama won in 2008 and 2012.

How Trump Is Doing in the Rust Belt

But now there’s trouble in union-land for Trump. Gallup polling shows that he has below a 50 percent approval rating in Wisconsin, Michigan, Ohio and Pennsylvania, with all but Ohio (45 percent) below the 43 percent mark. In Indiana, Vice President Mike Pence’s home state, Trump has an approval rating of 44 percent. His approval ratings in Minnesota and Illinois are even bleaker.

Much of this is due to concerns that the president’s tax plan benefits the wealthy much more than the average worker. Any benefits to the latter are feared to be temporary. Additionally, massive cuts to programs that benefit working families revealed last week in the budget could drive support down even further.

Republicans are getting a little concerned with how special elections are going. Democrats retained the gubernatorial seat in Virginia, picked up one in New Jersey, won an Alabama Senate seat, and have captured a number of special election races in red states (like Missouri) or those that went for Trump in 2016 (like Wisconsin).

Pennsylvania’s special election will test if Trump’s connection to unions will hold. Early polls showed that GOP State House Rep. Rick Saccone had a double-digit lead over Conor Lamb, the Democratic nominee, by a 12-point margin, with many voters undecided. A more recent poll by Gravis showed that number cut in half, while a Monmouth survey showed the race within the margin of error, just three points. That’s a far cry from Trump’s solid win.

Some analysts see Saccone as not as popular as Conor Lamb, a 33-year-old telegenic attorney, U.S. Marine Corps Captain, and former assistant U.S. Attorney. But Saccone has his own record to point to. As his campaign bio points out, he is a military veteran who served in North Korea and Iraq. Saccone has tried to make the election about Nancy Pelosi, while Lamb’s site connects more directly and thoroughly to pocketbook issues, a formula that worked for Democrats in Missouri and Wisconsin. And Lamb names unions as a priority, which Saccone has yet to do.

Some may blame Trump, but the Gravis poll that shows Saccone is in the lead also shows Trump with a 54 percent approval rating, so it’s not the president’s fault (though the Monmouth poll showed voters more divided on Trump). The district likes him, so it makes sense for him to visit.

If Trump is to reconnect with union voters who helped him in 2016, he has to shore up Republicans in Congress and try to sell the tax plan to the working class. 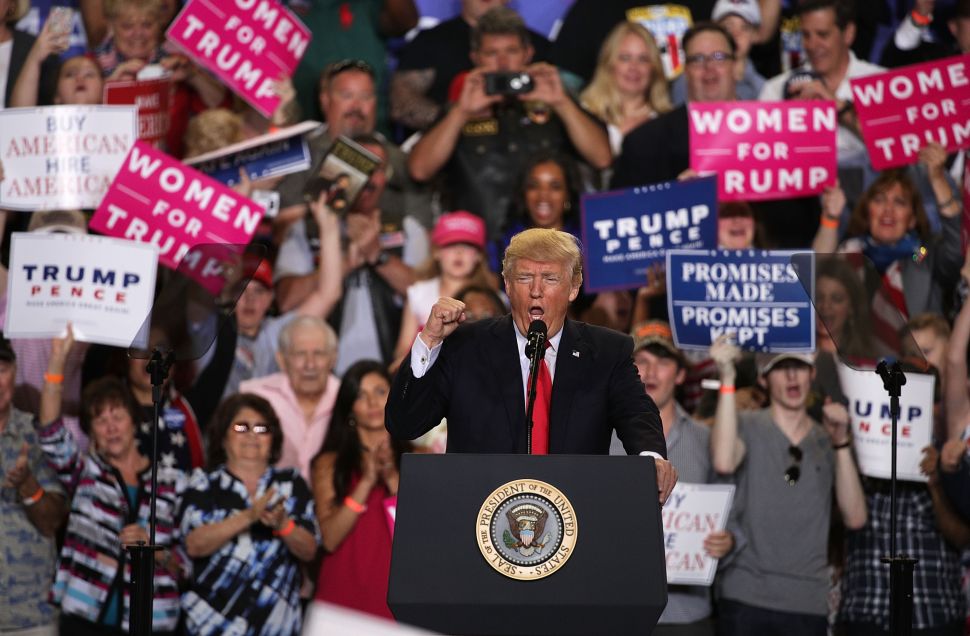