Pete Hamill has two bad hips, so he needed help from both a walker and the steadying hand of his wife to get onstage at New York University’s Arthur L. Carter Journalism Institute last night.

But once he’d settled into his chair, it was clear that New York’s 82-year-old literary lion hadn’t missed a beat.

“How many Irishmen does it take to walk three steps?” he deadpanned.

Hamill spoke with James McBride—a fellow author, Brooklyn native and NYU Distinguished Writer in Residence—to mark the 50th anniversary of his first book A Killing for Christ. The novel, which tells the story of a priest intent on assassinating the Pope, was recently reissued with a new introduction by Hamill.

But while the book may have been the impetus for the event, the conversation focused more on Hamill’s time as a journalist. He wrote for The New York Post, New York Daily News and Newsday throughout his career.

Even before his first reporting gigs, however, Hamill learned a lot from his childhood comic books. He said serials like Dick Tracy and The Spirit helped him learn how to tell a story (more recently, he’s become a fan of Black Panther).

Hamill also absorbed a lot about storytelling from his Irish immigrant parents, who were “forced into exile by bigotry.”

He compared their experience in the last century to the current immigration debate. Without mentioning the president’s name, Hamill said the cynicism many politicians and writers feel toward modern day immigrants is “poisonous.”

“There’s a human center to all of us that we have to celebrate more and stop with the yapping,” he said. “I think we’re gonna get past present time lousiness and be better than we ever were. It was true for me.”

Once Hamill got past the “lousiness,” some of his most important teachers were the older journalists he learned from on the job.

Despite the many changes in the media landscape, Hamill said today’s young reporters should also look to older mentors.

“You can learn a whole lot of things from the guys who were here before you were,” he said.

Hamill also said the craft of journalism is still essentially the same as when he started—even if the mode of delivery has changed.

“Newspapers are slowly fading away, but that doesn’t mean journalism has to fade away,” he said. “The old truths—to find out what’s going on in our world, who controls it, who needs to be challenged and who needs to be embraced—are valid and necessary.”

The same is true when writing fiction, according to Hamill. His biggest challenge when working on a novel is getting inside the minds of the characters.

“Journalists can’t write the inner lives of people, they can only suggest it,” he said. “So much of what happens to us is bottled up inside.”

So, just as in his journalism days, Hamill looked to the old masters like Ernest Hemingway and Mark Twain. He said the most important lesson he learned from these authors was to avoid “phlegmy” writing.

“It doesn’t have to be a 900 page novel that leaves you punch drunk after chapter 91,” he said.

In keeping with his love of the classics, Hamill also revealed that he would be spending eternity with one of New York’s most infamous real life characters.

“I bought a plot in Greenwood Cemetery right next to Boss Tweed,” he said. “Because if there’s an afterlife, who wants to be with a saint?” 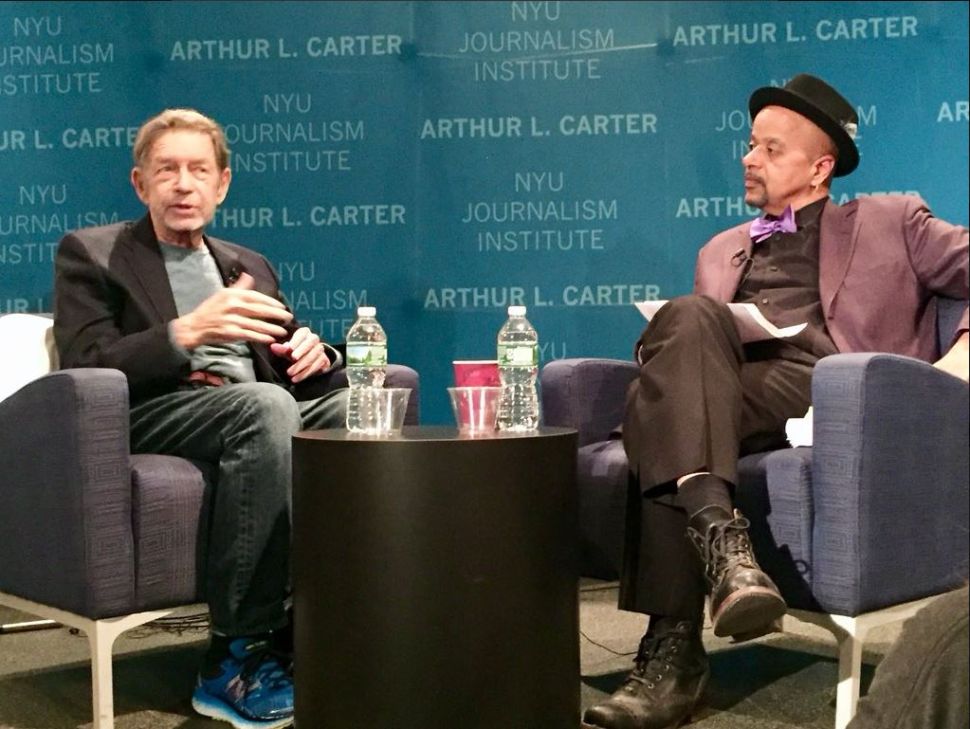