According to The Wall Street Journal, the venture capitalist is planning to relocate his home and personal investment firm from San Francisco to Los Angeles. He will also reduce his involvement in the tech industry, including possibly resigning from Facebook’s board.

The reasons for this are primarily political.

Thiel was the only prominent tech executive to support President Donald Trump’s election campaign, and he’s remained a close adviser during Trump’s time in the Oval Office.

Thiel is reportedly “disaffected” with the “intolerant, left-leaning politics” of Silicon Valley, the Journal said. So, he’s moving Thiel Capital and Thiel Foundation, the two firms that oversee his investments, to Los Angeles this year.

A lifelong libertarian, Thiel called Silicon Valley “a one-party state” during a debate at Stanford University earlier this month.

“We need to engage more” rather than “telling Trump voters to just hurry up and die,” Thiel said at the event.

While Thiel is tech’s most prominent conservative, he’s far from the only one—and many of his fellows feel the same way he does.

In a survey by the advocacy group Lincoln Network, a majority of Silicon Valley workers said their company had liberal cultural norms. And more than one-third of conservatives said their right-leaning views kept them from doing their best work.

James Damore, the writer of the controversial “Google memo,” alleged in a lawsuit against his former employer that it discriminated against white male conservatives.

This discrepancy also shows in political donations. During the 2016 election cycle, employees at Google, Facebook and Twitter donated over $2 million to Hillary Clinton’s presidential campaign but less than $35,000 to Trump’s.

Thiel co-founded Paypal and was the first outside investor in Facebook, paying $500,000 for a 10 percent stake. He’s made over $1 billion since that initial investment.

And Thiel initially defended Facebook against accusations of conservative bias.

After Gizmodo reported in May 2016 that curators of Facebook’s “trending topics” section routinely suppressed conservative news, he convened a closed-door meeting between company executives and prominent conservatives.

But Thiel’s support of Trump was the last straw for many Facebook board members, especially Netflix CEO Reed Hastings. Hastings said Thiel should resign from the board because of his “catastrophically bad judgment,” and added that he would leave if Thiel didn’t.

Facebook CEO Mark Zuckerberg declined both resignations and defended Thiel, saying his “ideological diversity” was essential to the board.

Even though Thiel is still involved with Facebook, he sold 73 percent of his remaining stake in November.

Thiel’s controversies extend beyond the world of politics: he bankrolled Hulk Hogan’s lawsuit against Gawker, which shut down the site. Thiel claimed Gawker had violated his privacy by outing him as gay in a 2007 story.

Last year Thiel said he was interested in buying Gawker, reportedly so that he could remove articles from the site.

Failing that, he has also expressed interest in creating a new right wing media outlet.

Thiel is also still involved in venture capital work. Last month he purchased $15 to $20 million worth of bitcoin through his VC firm Founders Fund. Thiel has called bitcoin “the gold of the cyber age.” 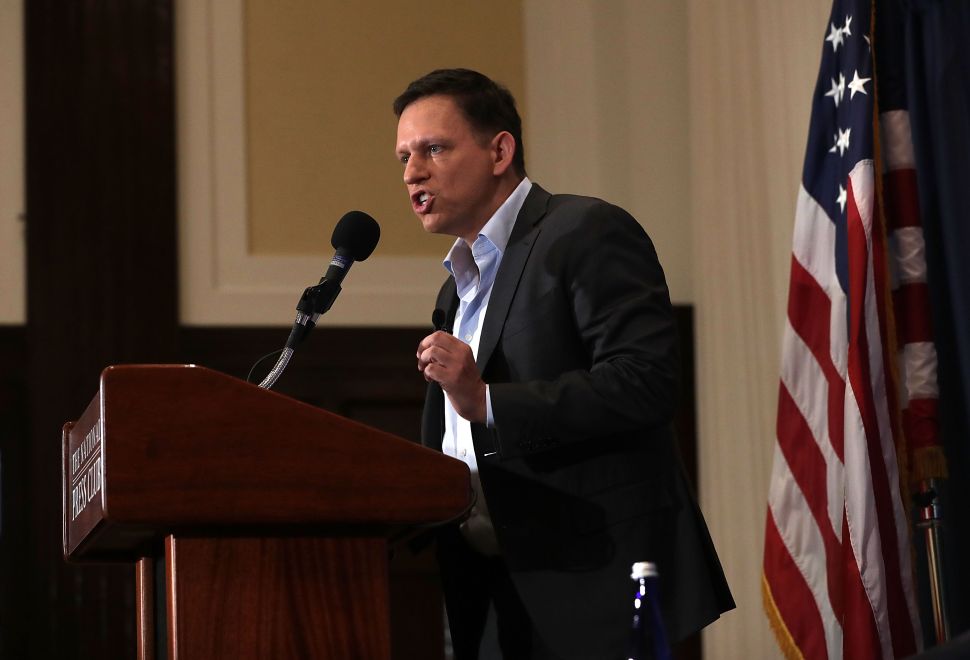