When your back is against the wall, what lengths are you willing to go to in order to get what you want? Scratch that—to get what you need? Financial ruin and the prospect of losing everything can make people do strange and desperate things…or such is the premise of NBC’s new series Good Girls, featuring three smart, talented women embarking on an adventure that ultimately seems to undercut these supposed characteristics.

The series delves into what happens when three women, fed up with getting screwed by the system, decide to take matters into their own hands. When dire circumstances force them to break the rules, sisters Beth and Annie, along with their best friend Ruby, band together to take control of their lives—by holding up a local grocery store.

In desperate need of money, the women plan the heist expecting to ease their financial burdens. But, new to the game of crime, they get pulled in deeper than they ever imagined.

The series stars Mad Men alum Christina Hendricks as Beth, Mae Whitman as Annie, and Retta, who is best known for her role as Donna on Parks and Recreation, as Ruby.

Sounds like a straight drama? It’s anything but…and that could be the show’s downfall. The creatives behind it desperately want it to be serious, edgy and laugh-out-loud funny, with a heavy dose of that relatable family angst thrown in. It doesn’t always work.

Hendricks admitted at a recent press event that getting the tone just right was tricky. “We do go from very, very serious stuff into funny things, and we just try to make sure that we play every moment as real.” The attempts to make the series bounce between so many genres makes the plot feel uneven in initial episodes, but that’s not to say this can’t smooth out as the season progresses. Still, it’s initially a bit of a distraction.

Such bumps, it could be argued, are par for the course in trying to present something new and fresh to audiences: a set of women not normally seen on primetime TV. Stepping outside of the normal formula is always going to be a bit jarring. But it’s clear the creators don’t always hit the right note. A perfect example is the title. Executive producer Jenna Bans explained it was meant to be ironic. “The term ‘Good Girls’ sort of gives you an image of that simple, little sweet girl who never does anything wrong, who follows the rules. It contradicts the image of this perfect wife and mother that’s just going to follow the rules and not make a stink about anything.”

But in this era of #TimesUp it’s a little tough to hear these women referred to as girls. They’re hardly that. Given the actions that set this series in motion, it’s difficult to believe that these three would ever not make a stink about something they don’t agree with. Or hold their tongues if someone was keeping them down. They’re far from meek, but it’s a shame the creators had to resort, in naming the show, to using a stereotypical analogy for what these women aren’t.

Let’s talk about what they are. Though dramatized, these women are dealing with very real and very relatable problems. Beth is on the verge of losing her house, Annie is locked in a custody battle and Ruby is struggling to pay for expensive medication for her daughter. All of this certainly gives an air of authenticity to the narrative of the series, making the actions of the women seem a bit less outrageous. An average person wouldn’t most likely wouldn’t resort to robbery when faced with these types of challenges, but you can see why Beth, Annie and Ruby went down this path.

Having said that, if these women are as smart as the show presents them, it still seems out of character for them to even think they could pull off this heist without any consequences. Yes, there are some unforeseen outcomes, but it’s a little far-fetched to believe this trio truly thinks they can skate away with the money and not pay any price for their actions.

In trying to make a mash-up between Breaking Bad and Thelma and Louise, the creators don’t always succeed. Bans acknowledged this fine line they are trying to hit, “It’s a fun tightrope we get to walk every episode, telling these stories.”

But in one thing, she is right. Good Girls is fun. Watching women deal with relatable issues in a way that allows you to laugh is where the series succeeds. It may not necessarily be believable, and whether this will overshadow the show in the season overall remains to be seen. But along the way, it’s great to witness this concerted effort to craft strong, novel female characters who both support each other and kick ass on TV. 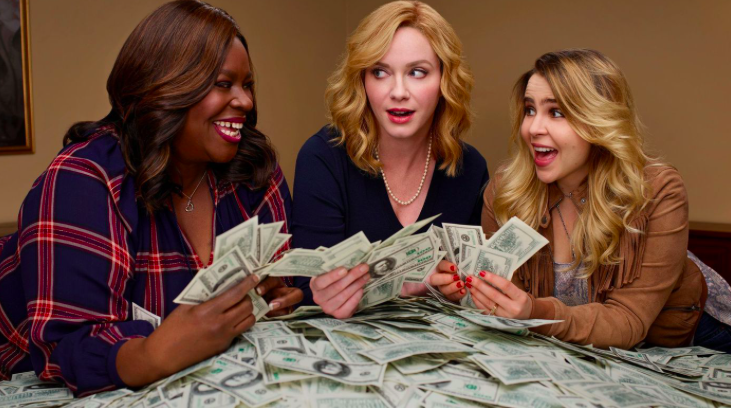