Thomas Cole is remembered as one of the foremost American landscape painters of the 19th century, and for good reason. Considered the founder of the Hudson River School of painting, his verdant vistas, especially those depicting New York’s Catskills and the wilderness of the East Coast, were instrumental in building America’s brand when it was just a small start up of a democracy. Yet, as much as this artist may have fathered an ideal of Americanness, he was an immigrant to these shores rather than a native son.

At the Metropolitan Museum of Art in New York, a new exhibition is intent on hammering this point home (and not a moment too soon, given the precipitous politicking around issues of immigration in America today that lately caused our government to shut down). “Thomas Cole’s Journey: Atlantic Crossings,” on view through May 12, explores how Cole’s unique view of the United States was shaped by both his upbringing in a riotous, industrial Manchester, England, as well as an early adulthood spent traveling back and forth to Britain and abroad.

Featuring over 70 works—including major loans of paintings by British landscape artists John Constable and J.M.W. Turner, and American artists like Frederic Church and Asher B. Durand—the exhibition represents the Met’s first major investigation of Hudson River School painting in over three decades. “It’s exciting to see how the subject of national identity, landscape and the environment has even greater currency now, 30 years later,” said Sylvia Yount, the Met curator in charge of the American Wing, to a group of assembled press on Monday morning.

Indeed, the show does an exceptional and not at all subtle job of contextualizing Cole’s life in terms seen bandied about in the daily news in our own era. From the outset of the exhibition, the artist is cast an “economic migrant” due to the perilous conditions he and his family endured while northern England found itself ravaged by industrial machinery and under attack by the workers this change displaced. Scenes like the 1801 Coalbrookdale by Night by Philippe Jacques de Loutherbourg show a fire-and-brimstone world created by new technologies like coal and steam power. A rare print, The Leader of the Luddites from 1812, suggests the kind of labor Cole found himself doing as a teenage low-wage factory worker in a cotton mill making pattern print engravings for fabrics despite earning a high quality education.

Unable to make a living, his family fled to America in search of better opportunities. “He arrived on on these shores as a 17 year old, an economic migrant fleeing hardship at the moment of the Industrial Revolution. He was essentially coming from a modern dystopia,” said Tim Barringer, a professor of Art History at Yale University, who explained that Cole’s England was far from the rolling moors of the Bronte sisters. “Can you imagine what it was like for him to see something like the Catskill mountains?”

Looking to one of his earlier works in the show, a large, overly lush Biblical scene titled The Garden of Eden from 1828, it’s actually not hard to imagine Cole’s burgeoning environmental appreciation once he reached U.S. soil. He saw America was a land of promise and his small but reverent View of the Round-Top in the Catskill Mountains (Sunny Morning on the Hudson) (1827) foreshadows his later romanticized depictions of our wild, rolling countryside. This is seen at its best in the Met’s View from Mount Holyoke, Northampton, Massachusetts, after a Thunderstorm (The Oxbow), 1836—the type of image ingrained in our collective imagination as deeply as the figure of Uncle Sam and and appreciation for apple pie.

The artist’s travels to London and other European capitals (places he had never visited while he was a child, as he left Britain from Liverpool) where he encountered works by French landscape master Claude Lorrain and met with British artistic heavyweights Constable and Turner prompted his magnum opus The Course of Empire (1835–36). The entirety of this five-piece series depicting the rise and fall of a Classically inspired, imaginary metropolis is on view in its entirety and is ostensibly the didactic crux of the Met’s “Atlantic Crossings” show.

According to Barringer, Cole returned from his time abroad—a newly naturalized U.S. citizen—in the early 1830s with an improved “global world view” and promptly assessed that the country had been taken over by “dollar-godded utilitarianists” under a new polarizing president, Andrew Jackson. “I’ll leave more contemporary parallels to your imaginations,” Barringer joked, while noting that the political climate fostered a sense of moralizing urgency in Cole’s work.

The Met’s wall text explaining Cole’s intentions behind the series is less humorous, however, stating that The Course of Empire may well be a fable but one that underscores the self-destructiveness of human progress, especially when progress is fueled by “a venal love of wealth and luxury.” The artist may have been trying to warn his peers of such political perils so 19th-century American society could correct its course. Yet, in the 21st century, the allegory he presents seems more a prophetic vision, especially since the final paining, Desolation, reveals a large lunar orb—a super moon, perhaps?—rising over a crumbling, deserted city devoid of citizens, poor immigrants and enterprising millionaires alike. 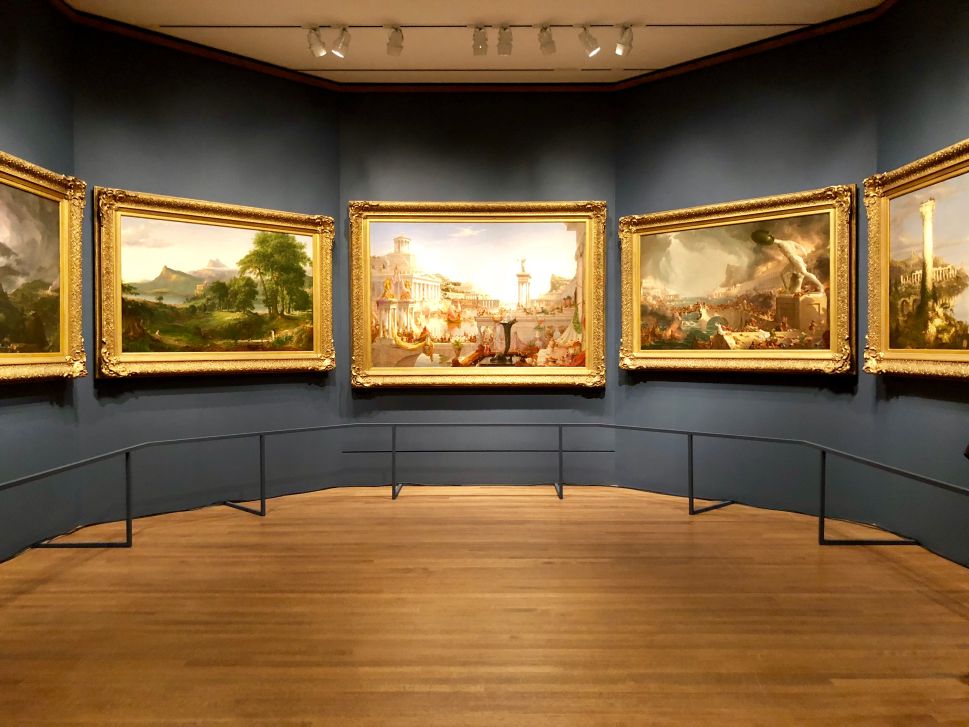