The New Museums’s triennial of contemporary art is this year called “Songs for Sabotage”—true enough to its name, it is showing work by artists who are young, international, transgressive, grotesque-inclined, shrill, satirical, and topical (for a Triennial?). To borrow a term from several triennials ago, they are the supposed “cutting edge.” Or as the catalogue puts it, “twenty-six artists, collectives, and artist groups from across the globe that lyrically and poignantly serve as calls to action against the systems of domination and exploitation characteristic of global capitalism today.”

The notion of a Triennial for contemporary art seems ready for a punchline. The emergence of new artists these days is a better fit for a cycle of six months than three years. I’ve felt that way about design, too. But “ennials” of any sort get attention these days, as this one no-doubt will, too.

Most of the works were commissioned for the exhibition. As always, there are artists who toe the line closely and those who avoid political literalism. As I surveyed the evidence of artists looking for something new to say, and saying it in spasms of emotion or paint or staples or seagrass, I was drawn to weavings by Zhenya Machneva from St. Petersburg, Russia.

Weavings are returning in museums in a big way. Mostly they’ve been called back for anniversary shows paying tribute to the summer of love taking place right and left. But Machneva is doing something restrained to evoke Soviet history.

They look machine-woven, and their palate could be called nostalgic, if that’s what you call the minimal range of color they contain. It’s monochrome. (You’ll know what I mean if you saw Wolfgang Becker’s clever 2003 German film Goodbye Lenin! where a young man in newly-reunited East Berlin decorates his aging grandmother’s apartment in the styles, products and faded pallor of the East Bloc, so she won’t be shocked when she awakes from a coma to find out that communism has fallen.) That was comical. This is soberly elegiac. Just in case you fall in love with Machneva’s weavings (if you love Soviet industry, you can love anything) a pile of cables is nearby to keep you in touch with images that might have inspired them.

Color is crucial to the paintings of Tomm El-Saieh, the work that I liked best in this show. Transplanted from Haiti to Miami, El-Saieh makes seductive paintings with secrets that he draws you in to explore. The graceful all-over patterns make you think of a radiant early Jackson Pollock from a distance, but on a closer look, you see that El-Saleh works in an area between abstraction and an information-inspired iconography. The pictures draw you into labyrinths that turn into little games that lead you nowhere specific. But these games are also a play on what we bring to them: a fuzzy notion of what’s real. Their sly allure obscures their complexity as we enjoy them. Pay careful attention to Greeking, a work in black, white and gray, which operates, it seems, with a hand tied behind its back, given El-Slaeh’s gifts as a colorist. It’s a puzzle of challenging understatement.

Monuments being as controversial as they are these days, Daniela Ortiz makes hers on the scale of knickknacks, in the same kind of shiny ceramic. Their size, like household votive statues that you find throughout Latin America, is all the more underwhelming on pedestals that foreground that scale, or the lack of it. Toward the back of a group of these is a beheaded Columbus. It’s also missing the 800-number for how to order it. In the forefront of Ortiz’s ceramic display, a female figure surveys a pile of severed heads in This Land Will Never Be Fertile for Having Given Birth to Colonizers. Besides the dogmatic politics, made more palatable thanks to Ortiz’s deftness with ceramics, there’s a lesson for her peers. Artists who think that large is beautiful (or important) would do well to consider the size of their work. Perhaps it has something to do with price.

Headlessness in “Songs for Sabotage” doesn’t end with Daniela Ortiz. The beheading, a leitmotif in the show, has a dark humor to it as Ortiz deploys it—not so with  Haroon Gunn-Salie, whose memorial to miners killed in South Africa is a crowd of crouching headless figures cast in metal—a bona fide monument looking for a location.

Strident politics tend to be irony-free, but it’s hard not to laugh at the earthy cartoonish gonzo vision (with its own headless figures) of Hardeep Pandhal, a Sikh of Indian origin living in Glasgow and oozing with irreverence. He offers a paradox. His videos are maniacally tasteless, but you can almost smell them, and you’d be right to suspect that the bawdy renegade lost his head, as they say. Here’s what the catalogue says about his work: “Pandhal uses this dense, scatalogical [sic] imagery as a caustic shorthand, the potent graphemes of which might be assembled and recombined to satirize ideas of cultural fixity through symbols commonly used to compound and solidify identity.” Oh dear.

The young crowd probably won’t read those sophistries. They flock to the New Museum, which has a grasp on the youth audience that other art museums should envy. Many of the artists in “Songs for Sabotage” are themselves young, and some of their work has a garage-art look with the same allure found in music that the parents of teenagers can’t stand hearing. 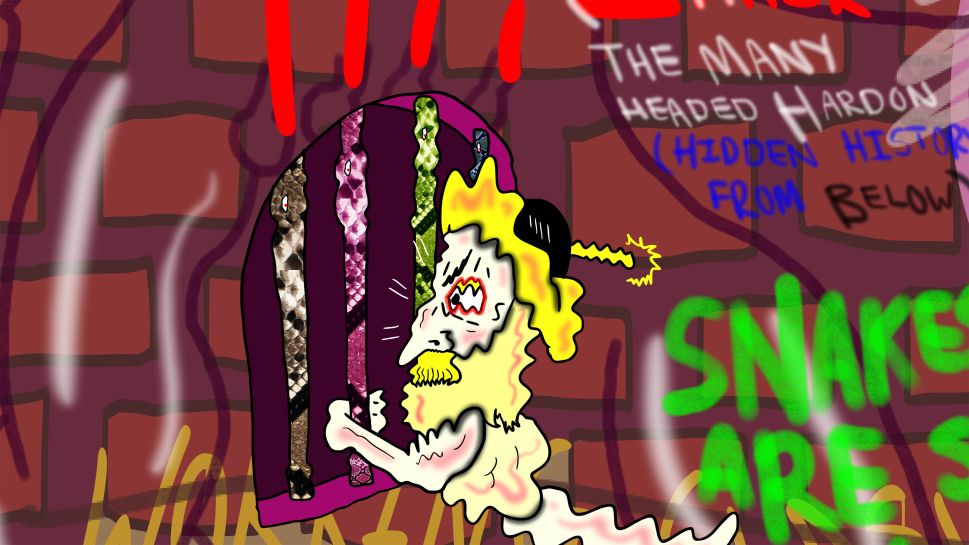