At a time of toxic politics, rancid culture and intellectual mediocrity, when the younger generation reportedly has no role models, Clint Eastwood not only wants to prove real heroes actually exist, but he’s giving them a rare opportunity to tell their own stories themselves. The 15:17 to Paris chronicles the events on August 15, 2015, when a terrorist attack on the afternoon train from Amsterdam to Paris was prevented by Spencer Stone, Anthony Sadler and Alek Skarlatos, three courageous American boys on a European vacation. Their bravery was admired by the passengers whose lives they saved, and rewarded with the French Legion of Honor, but despite good intentions, the movie never lives up to the breathless excitement the real-life story promises.

Even with his characteristic fondness for minimalism, this is an odd movie for Eastwood. The action doesn’t occur until well over an hour of  filler, and takes up less than ten minutes of screen time. The rest of the movie limps along on flashbacks about three average Joes who bond at an early age and follow each other on overlapping paths through life.

From public high-school days in Sacramento, when Alek and Spencer lacked concentration and were unable to focus, to the Christian academy where they met Anthony, all three boys were slow students, always being called to the principal’s office for disciplinary action. Eventually Alek moved to Oregon to live with his father, Anthony changed schools and went to college while Alek and Spencer enlisted in the military. But they all kept in touch and shaped up without ever completely abandoning their capacity for rebellious fun. Finally Spencer, stationed in Portugal, and Alek, serving in Afghanistan, meet up with Anthony in Berlin and reunite for a back-packing European vacation replete with selfies showing Venetian gondolas, Roman ruins, and Amsterdam discos. Hung over, they finally board the high-speed train for Paris, along with a mob of commuters, fellow tourists, and Ayouh El Khazzani, an ISIS-motivated terrorist armed with a knife, pistol, assault rifle and 300 rounds of ammunition.

What happens briefly, in the final minutes of the film, is all there is to the alleged plot, but the three likable, friendly, fun-loving guys do a fine job of playing themselves with naturalism, conviction and a refreshing lack of artificiality. Guided by director Eastwood to eschew the dramatics and go for realism, the boys are as honorable and without guile as they were that day on the train to France.

Unfortunately, they are hamstrung by a banal screenplay by Dorothy Blyskal that makes a weak attempt to show what drives the boys to an act of accidental heroism while forcing them to say things like “Do you ever feel like life is just catapulting you toward something?” We never really learn much about the three leads or their take on terrorism, and the fourth hero on the train, a British passenger who helped subdue Khazzani, is not even named. The two pros on the premises are Jenna Fischer and Judy Greer, as the mothers of Stone and Skarlatos respectively, but in what should have been a full-course meal they are reduced to little more than salad dressing. 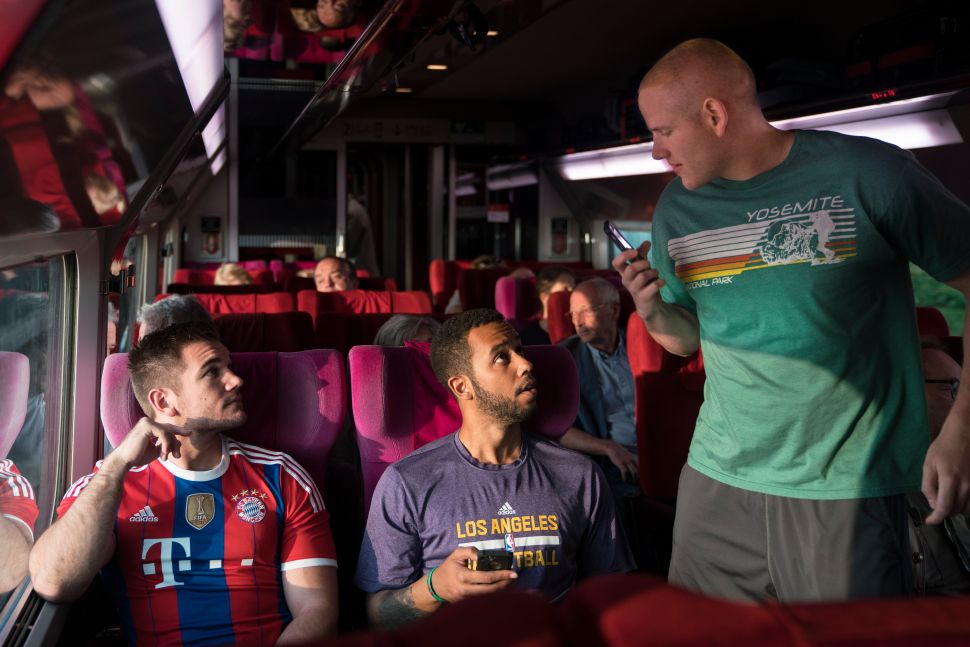