Marina Abramovic is the doyenne of performance art. She captured that status with her regal presence in 2010 at the infinitely expanding Museum of Modern Art—nothing if not a gleaming palace—when her performance The Artist is Present consisted of staring, in a long gown, at whomever was sitting across from her.

Paying visitors waited in line for hours to be in that seat. To paraphrase what Abramovic has said many times, “what’s a performer without a public?”

But even regal figures can have a revolutionary pasts. Look at Napoleon.

Think back to Abramovic’s own bold performances in the 1970s. Video (and still images pulled from video of those events) are the subject of an exhibition, “Marina Abramovic Early Works,” on view through March 17 at Sean Kelly Gallery. It’s worth the trip, and you probably won’t wait in line.

The images and the information aren’t new—this is an early Abramovic show, after all. But those performances, filmed in Belgrade in the1970s have a swagger and a conceptual cleverness that take us back to those times and beyond.

Visitors come at the show obliquely, first encountering it in an alcove at Sean Kelly’s 10th Ave. space—a detour from your through a Frank Thiel exhibition on the main floor.

This pocket of the show includes images from moving pictures of Abramovic’s performances, with framed recollections that read like haikus. One is the image of a five-pointed star cut with a razor blade across Abramovic’s stomach. On the opposite wall is a burning star on the floor of a stage. You can read the stars as a critique or spoof of authority in Yugoslavia, the communist state where Abramovic was born and where her father was an army officer.

That’s obvious enough. The crude star scar also underscores Abramovic’s point in one of the framed captions, that art should not be beautiful, a statement that she acts out in one photo by combing her hair violently.

Step back, and Abramovic becomes less provocative, and more iconic, as so many artists’ legacies do with time. A shot of her, kneeling and nude, smeared in what looks like blood, with a sharp object in her hand, makes her look like Medea. Another photograph of her standing, bare-breasted, could come from a production of Saint Joan, imagined by Abramovic. Why should there be only one Cindy Sherman?

If the still images give you album-cover moments, the videos of Abramovic’s performances downstairs are closer to the events in full—or as full as video can make them.

The videos are shown on a loop, so you get a long march through entire videos in sequence rather than excerpts. In the first one, Freeing the Body, 1976, Abramovic, at age 30, is moving to the beating of an Africa drum, wearing nothing but a dark cloth on her head. More ominous than anything seductive, she’s not so much dancing as she is shaking free of something—on and on until she falls to the ground. This happens after eight hours. The film is only a long 51 minutes.

To call the 1970’s back-and-white filming crude would be like calling Abramovic a gadfly. What else is new?

The lighting, such as it is, gives you two shadowy figures of the dancing Abramovic on a backdrop. This was the era when much of “video art” was raw documentation. And Abramovic, as you’ll see in these videos, is better raw than refined.

The camera doesn’t move. The video is nowhere near as endless as Andy Warhol’s films could be, but Abramovic holds you there, like the early films of Yoko Ono, with the promise of something. The constant movement creates a feeling of stasis that feels permanent—perpetual motion. She finally wears herself out and sprawls on the floor. This isn’t a spoiler, she tells you as much in a caption upstairs.

In the second video, Freeing the Memory, 1976, with the camera at tactile range on her face, Abramovic spends 50 minutes reciting a list of words. Is this free association? Who knows. The public is free to make up its own mind.

There’s more, including Freeing the Voice, 1975, a performance where Abramovic screams until she loses her voice (the still from that video is the show’s closest image to a cover shot), plus shorter videos with Abramovic’s former partner and collaborator, the German artist Ulay.

Watching these videos, it’s hard not to see Abramovic’s The Artist is Present and her work since then as an extended victory lap. If you’re not already part of her audience, “Marina Abramovic Early Works” is where you should consider starting.

And it bears repeating: admission is free, and you won’t have to wait in line. The artist may not be present, but in this show one comes to understand the work from which such a presence sprung. 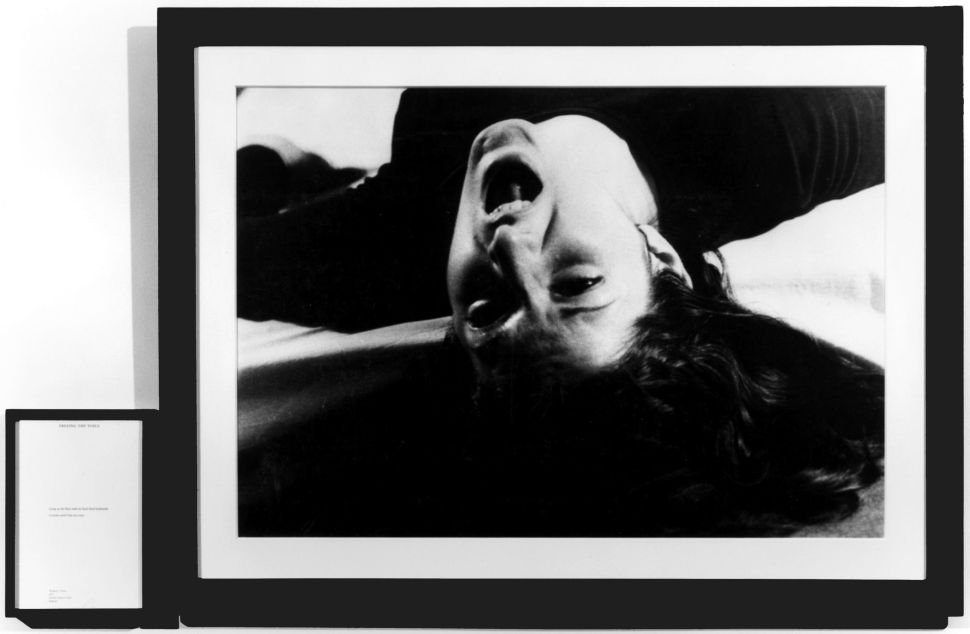