Richard Thomas vividly remember his big “Eureka!” moment. It was just after he came home from a late-night piano gig, flipped on the TV and found a spectacle in full swing on The Jerry Springer Show.

“It was a particularly violent episode—and a particularly profane one,” he recalled. “Every other word was bleeped out. There were about seven or eight people screaming at each other. You couldn’t understand a word anyone was saying.” And among the flying furniture and fists, there was the sharp-suited, silver-haired tabloid talk show host, Jerry Springer, calmly adjudicating over it all.

Maybe it was the heightened histrionics or the extravagant gestures—whatever it was, Thomas quickly came to the calm, well-considered conclusion: “Ah,” he thought, “it’s an opera.”

In a way, that was an easy reach for him. He’d just written a show called Tourette’s Diva, which became a minor cult hit on the London fringe. Perhaps because of the profanities that abounded in that show, he found the silenced obscenities of Jerry Springer annoying. “I thought, ‘Here we are, getting this voyeuristic shame—this guilty pleasure—and we’re not allowed to get the full deal.’ What I learned from writing [Tourette’s Diva] was that the operatic voice somehow diminishes the violence and that profanity is really very funny—it was almost like it didn’t deserve to be funny. I took what I learned from that into the Jerry Springer idea, but I knew it was a good idea. I always knew it was a good idea.”

As you may have gathered, this Richard Thomas is not the actor who played John-Boy on The Waltons, who never progressed much beyond “shucks” and “pshaw.”

This Richard Thomas is the British composer, scorer and creator of Jerry Springer: The Opera, which opened this week Off Broadway at New York’s Pershing Square Signature Theater and runs through March 11.

More than a quarter century ago, the Springer show set the bar for people behaving badly—the same bar today’s Real Housewives and Jersey Shore crowd use for chin-ups, proving bad taste is eternal and there’s no such thing as a new aberration.

Among the readily identifiable domestic calamities that this iteration of Springer adjudicates over are a housewife who pines to pole dance over the objections of her jealous husband; and a faithless man who cheats with his wife’s best friend…among other paramours.

Eventually, it proves too much for Springer. He’s only one Solomon. At the end of Act I, after taking a bullet from a man in a diaper who was aiming at a man in a Ku Klux Klan sheet, he spends Act II searching for redemption and some purpose to his life. He even takes on the job of brokering some sort of peace between Satan and Jesus.

Punctuating all of the above is a steady barrage of F-bombs. Thomas’s musical ability to squeeze arias out of those four letters has led to some massive miscounting. At least two London publications—The Sun and the Daily Mail—reported that the word comes up 3,168 times, but Stewart Lee, who co-wrote and directed the show, claims that there are only 174 swears, and this includes words like nipple.

Jerry Springer: The Opera grew incrementally from the year 2000, starting in a small French club in London with two singers and Thomas at the piano playing Jerry (badly, he insists). Still, it went well enough for him to add four singers. Then came the one-act version with 12 singers. When it played the Edinburgh Festival in 2002, it sold out, and, on returning to London, Nicholas Hytner invited the show to be a part of his first season as director of the National Theater, where it ran 609 times.

Award-wise, it proved to be the darling of the 2003-2004 season, becoming the only show ever to win four Best Musical trophies (Evening Standard Award, Critics’ Circle Theater Award, Theatergoers’ Choice Award and the Laurence Olivier Award).

Can New York be far away? Light years away, it turned out (or at least 15—literally).

A two-concert “Broadway audition” was held in  2008 at Carnegie Hall. Harvey Keitel starred in the then-non-singing role of the tabloid talk-show host, and David Bedella was brought over to reprise his Olivier Award-winning performance of Springer’s Warm-Up Man, who, once fired, becomes inflamed and turns into the antagonist of Act II.

“Ben Brantley gave us a rave review when it was in London in 2003, and he also gave it an amazing review at Carnegie Hall,” Thomas remembered. “I just thought it was a slam-dunk that we were going to be on Broadway by at least the next season.”

If the dirty words and dirty laundry of kinky characters didn’t scare away investors, religious zealots protesting the metaphysical meanderings through purgatory, hell and the afterlife probably did the trick. Nobody would touch it.

But three years ago it sprang back to life when director John Rando was floated the idea of doing a reading of the show, and Thomas stepped up with some new ideas and new songs. “Richard was the guide for me in terms of the excitement because his excitement’s infectious,” said Rando. “He was really excited about the idea of condensing the show a bit more and making a few changes.

“I think what would be unique about our production and unique about doing it in New York would be a space that would make the audience feel like they’re at The Jerry Springer Show.” Indeed, he fills the front rows with soon-to-be contestants.

One of them is a carryover from Carnegie Hall and a current cast member—the operatically trained Luke Grooms, doubling as a triple-timer and as God. In the role of the latter he was rewarded with an enhanced number: “It Ain’t Easy Being Me.”

Scott Elliott, a latent fan of the show and artistic director of The New Group, which has a penchant for controversial, cutting-edge projects, was given a video of the reading. He liked the Springer idea since Reality TV is so in vogue—and the day after a reality TV star became president, he was on the phone to Rando to firm a date.

“To me, it feels like people have gotten over the shock value of Jerry Springer and can appreciate its humor and artistry,” said Elliott. “Nostalgia has been very good for us. Our crowds are eating it up.”

For the first time in the history of the show, Jerry Springer sings—and Rando cast the role accordingly—with Terrence Mann (Les Miz, Pippin), prompting Thomas to come up with a new Act II-opening number for him, “I Just Wanna Make You Happy.”

“What’s interesting about this version is the rewriting—the fact he has a number to sing at the top of Act II—makes the show feel more like Jerry’s journey than it did in London,” said Thomas. “It’s better somehow. Suddenly, the show becomes something other than about a talk-show host. He’s an everyman questioning if he took the right path. That resonates. I’m pleased that theme seems to have emerged.”

In point of fact, Thomas is just plain pleased to be here in New York. “This is the home of musical theater. This is where it’s at. It’s the great American art form, so the fact you can actually get your foot in the door is terrific. We’ve got a stage for the triple threats. It’s fantastic. Most people here are at least double threats. That level of talent is really very hard to come by in London. I told a casting director there, ‘Listen, I’m not asking you for triple-threats, but a single threat would be nice.’ 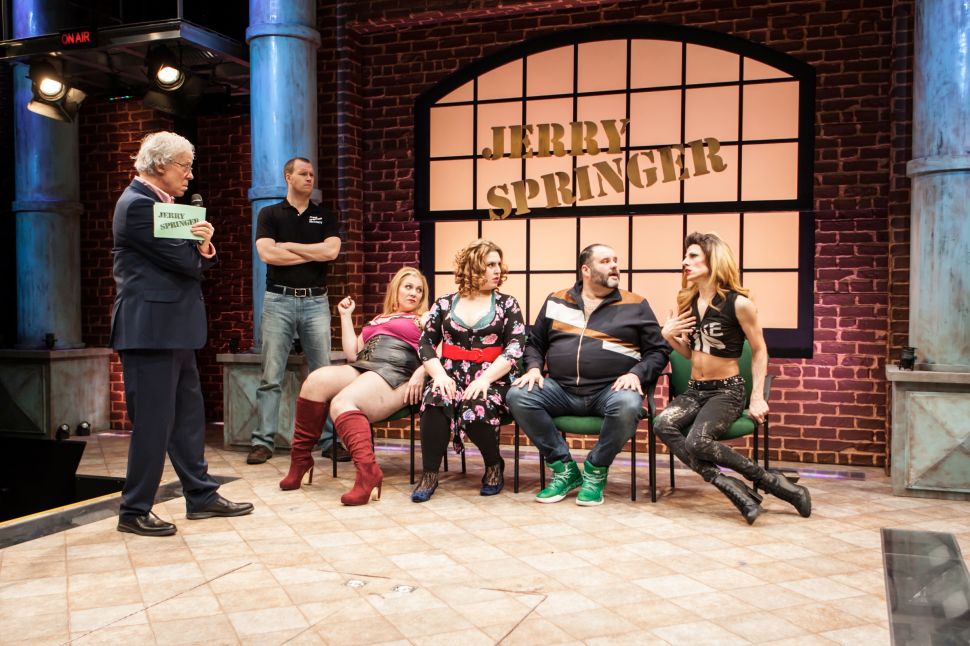