There are few more important issues confronting the West today than what to do about social media companies, which thanks to their ubiquity possess vast riches and daunting influence over our democracies. Indeed, their opinion-shaping power is so great that even the powerful are reluctant to state plainly that this issue requires frank public discussion.

It was therefore a welcome breath of fresh air recently when Robert Hannigan, a former British spy boss, sat down for an interview with the BBC and spoke his mind. Hannigan, who headed GCHQ (Britain’s NSA) from late 2014 to early 2017, had a top-secret front-row seat to recent events, and his comments were rendered more scathing by their measured delivery.

Social media companies are “massively rich” and “have huge power,” Hannigan observed, adding that they possess “global reach and global power, not just of money but of data that individual governments don’t have.” Hannigan knows all too well that, contrary to much mythology, unless you’re a spy or terrorist, Facebook knows vastly more about you than GCHQ or NSA do.

Moreover, social media companies, which are infected with a toxic admixture of trendy-left politics and rapacious capitalism, display an “arrogance that they somehow sit above democracy,” according to Hannigan, who tied this to a resurgent and dangerous Russia. Hannigan explained that Russia loomed as the single biggest security threat during his tenure as GCHQ director. Over the last few years, as Vladimir Putin has invaded Ukraine and seized Crimea, Russia “has become more aggressive, and they’re doing in cyberspace what they do in the real world.”

Hannigan hit on a fundamental reality of our age: As the Kremlin’s mechanized brigades have attacked Russia’s neighbors, its cyber-brigades have pillaged Western companies, governments and societies thanks to a big assist from social media. No Western country has been more directly impacted by this new form of Russian information warfare than the United States, which saw the events of 2016 transform our already nasty politics into something beyond mere partisanship.

Although the IC assessment that was released to the public last July was unclassified and therefore lacking much detail on Russian techniques, some of those were exposed last summer when the improbably named Reality Winner, an NSA contractor, leaked a Top Secret assessment by the agency that demonstrated direct Russian intelligence involvement in clandestine efforts to sway our presidential election. Although the Kremlin has officially denied it interfered in American politics in 2016, some of these denials have been with a smirk. Putin and his inner circle of Chekist honey badgers know we know and don’t care.

Then there’s the trickier matter of Donald Trump, the beneficiary of all that Russian espionage and propaganda. The president’s “love” for WikiLeaks—the Moscow spy front that did so much damage to Democrats in 2016—is a matter of public record, while incidents like his leaking of highly classified Israeli intelligence to Russia’s ambassador during an Oval Office visit not long after the inauguration raise uncomfortable questions about Trump’s actual relationship with the Kremlin.

To say nothing of odd events such as the high-level Team Trump meeting on June 9, 2016 with a Kremlin attorney who has been unmasked as a Russian intelligence officer—right in Trump Tower in Manhattan. The Trump campaign’s secret connections to Moscow were numerous and complex, and current Republican efforts to portray them as benign—like suggesting Trump staffers are innocent victims of FBI harassment—are laughable and worthy of derision. All we can say for certain at present is that the president and his retinue have gone to great lengths to mask and obscure whatever their relationship with the Kremlin actually is.

However, it must be kept in mind that social media made this all possible. The Russians have been spreading lies for decades. Moscow’s Cold War disinformation campaigns against the West were every bit as vicious and unpleasant as today. Active Measures, including fake reports, forged documents, and dastardly conspiracies invented out of thin air, were created by the KGB to smear Western governments—especially our intelligence agencies—and none more than America’s. In the 1980s, Washington got adept at pushing back against these Kremlin lies, as two administrations have signally failed to do since 2014, when Putin’s attack on Ukraine unleashed a simultaneous cyber-assault on Western institutions.

Social media made Moscow’s clandestine work much easier and more profitable. Although the lies currently emanating from the Kremlin resemble Cold War Active Measures in overall form and content, they are now disseminated so quickly, and through so many fronts, trolls, and bots, that Western governments are severely challenged to even keep up with these weaponized lies, much less push back. For this, we have the Internet to thank. While none can deny the countless benefits of the online age, this is one of its most pernicious side effects.

Let’s illustrate a concrete example. In the mid-1990s, Russia’s intelligence services commenced an Active Measure against NSA, designed to harm the agency’s public image and damage its highly valuable secret alliances with other Western spy services. This fell under the catch-all term ECHELON, which was an actual agency Cold War signals intelligence program, but which in Moscow’s telling became a stand-in for all Western SIGINT activities.

The first salvo came in 1996, when a New Zealand activist named Nicky Hager published a book, Secret Power, which exposed his country’s secret role in the NSA-led Five Eyes intelligence alliance. This work was a mix of fact and fiction and the public had no ability to differentiate between the two, causing trouble for the Anglosphere spy partnership. The same year, a book called Radio-Espionage appeared in Moscow, which exposed NSA secrets and painted the agency as a sinister ear listening in on the planet, enabling America’s global misdeeds. In fact, the book was written by Russian intelligence and, between them, these two publications launched the ECHELON campaign, giving anti-NSA activists worldwide their talking points to smear Western intelligence.

According to this Active Measure, NSA spent most of its time spying on America’s friends, conducting nefarious covert activities to harm freedom and prosperity. That none of this was true was irrelevant, and gradually the ECHELON myth began to spread. Journalists began looking into NSA and its global partnerships; that some of these “investigative journalists” were longtime activists with secret Kremlin ties was not known by the public. In the late 1990s, momentum slowly began to build, especially in Europe, against NSA and its leading role in Western intelligence, and it became a political problem.

Slowly was the key word. The Internet was still in its infancy, online journalism had just been born, and social media was still a distant dream. Nevertheless, the ECHELON Active Measure began to get traction, and the European Parliament commenced an investigation of alleged NSA activities. This culminated in a report released in the summer of 2001 that criticized NSA operations but was short on details. However, two months later, to the day, the Twin Towers fell, and suddenly the West had much bigger security problems to worry about than Western SIGINT.

Over the next decade, our spy agencies focused on counterterrorism to good effect, preventing more 9/11s, and NSA seemingly no longer had to worry about Russian propaganda. Complacency set in and lingering agency security problems went unfixed, despite repeated warnings from counterintelligence officials. The outcome, we know. A dozen years after the European Parliament report, the NSA contractor Edward Snowden defected to Moscow with over a million purloined documents from his employer.

Armed with this top-secret trove, another Russian Active Measure kicked off. Think of the Snowden Operation as ECHELON + social media. The fake whistleblower became a highly paid global celebrity, pontificating about espionage and morality from his FSB safe house, and Snowden’s revelations put meat on the bones of ECHELON’s allegations—particularly when the stolen documents were misinterpreted by Snowden and his journalist enablers, as they usually were.

Thanks to Facebook and Twitter, the Snowden story went global, doing massive damage to NSA and the Western intelligence alliance it leads. Without those social media powerhouses, the story would have likely petered out like ECHELON eventually did. Snowden wasn’t the first NSA malcontent to defect to Moscow with the aim of smearing the agency. Most ominously, the Snowden Operation forged the Kremlin template—weaponized lies attacking the West and its institutions, pushed nonstop by social media agents, trolls, and bots—that elected Donald Trump.

It’s time the West seriously addressed the problem, and quickly, since this Kremlin spy game isn’t going away. Left unchecked, this is the “new normal” that will gradually erode Western democracy itself. Too few of our opinion-makers have spoken up about this painful reality. A happy exception is Chris Zappone, an Australian journalist who for years has castigated the malignant influence of social media, particularly when it’s linked to authoritarian regimes seeking to undermine the West.

Zappone’s critiques of the insidious “Silicon Valley ideology” and how it aids Russia and China deserve attention across the West, since this threat confronts all our societies. I am skeptical that social media giants can reform themselves. They are too rich plus too vain and contemptuous of opinions other than their own. Their self-righteous pontifications would make Gilded Age robber barons blush. As an ardent champion of free speech, I don’t want the government to step in, but there may be no choice. Robert Hannigan feels similarly. In his BBC interview, he observed that the window for social media to self-police is closing fast. “That’s a shame,” he stated, “it would be much better if the companies reform themselves, but I think they are missing the boat.” 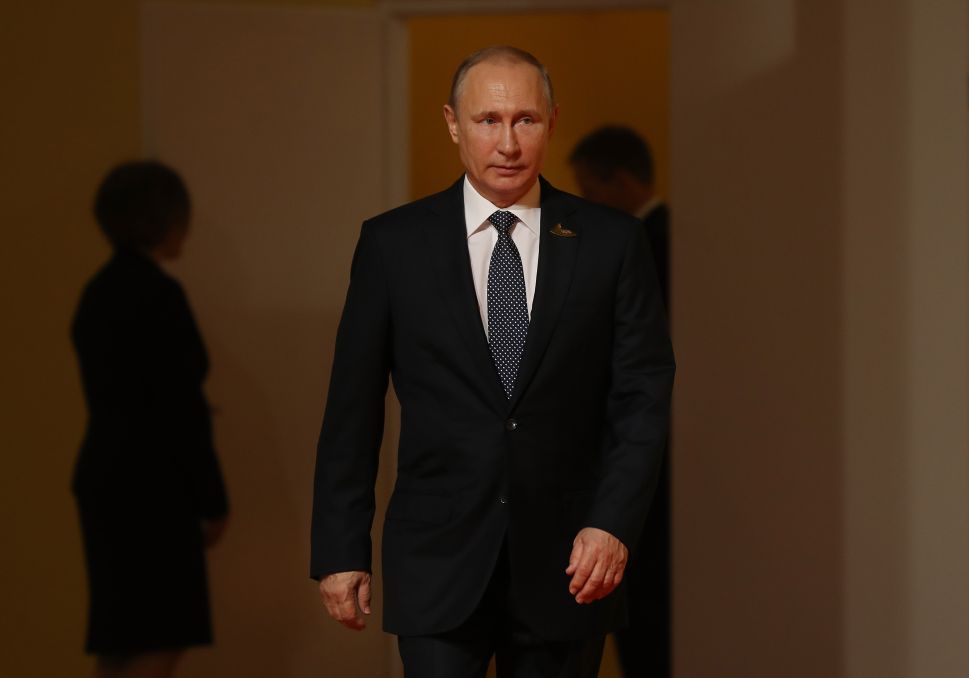