Russia says that the days when it was possible to stop the construction of its new natural gas pipeline to Germany are over: Nord Stream 2 will be built no matter what.

Russia will no longer take part in the disputes and no longer pay attention to the futile efforts of Washington, Warsaw and Kiev to stop the project.

German Chancellor Angela Merkel admitted this new reality during a press conference with Polish Prime Minister Mateusz Morawiecki last week in Berlin when she said on behalf of her country, “We think this is an economic project. We are also for energy diversification. We also want Ukraine to continue to have transit gas traffic, but we believe Nord Stream poses no danger to diversification.”

“This is gas from the same source, but via a different route,” the Polish prime minister said. “We indicate the risks related to cutting Ukraine from transit.”

He added, however, that Merkel’s comments on assuring Ukraine’s gas traffic fees were important.

The press conference confirmed what a lot of energy experts suspected all along: Ukraine, Poland and the United States have lost the fight against Russia over its new pipeline to Germany.

The German National Association of Gas Transmission System Operators announced on February 12 that the plan to build the EUGAL gas pipeline, which will carry Russian natural gas from the German town Greifswald, is included in the development plan for the German gas transmission network for 2018-2028. Greifswald is on the Baltic Sea, and the new pipes will send Russian natural gas across Germany to the Czech Republic. The new German pipeline will be 485 km long and capable of transporting 55 billion cubic meters of natural gas per year, supplied by Nord Stream 2 from gas reserves on Russia’s Yamal peninsula.

The first pipes have already been delivered to the German towns of Lubmin, Dregeheide and Prenzlau for storage in locations along the route of the future gas pipeline, and construction will begin in the second quarter of 2018, Russian website Neftegaz.ru declared triumphantly on February 13.

Some details remain unresolved, but Russian experts note that the plans for the construction of the EUGAL gas pipeline make it clear to opponents in Europe and overseas that Germany is determined to participate in the Nord Stream 2 project, which is a lucrative opportunity for Berlin to become a transporter of fuel.

“For those who are trying to torpedo [the Nord Stream 2 pipeline project], it is important to remind [them] that the length of the route from Yamal to Germany is 2,000 kilometers shorter than the current pipe that goes to Germany through Ukraine. And the cost of transit will also be almost two times less than the current cost, so the commercial and economic benefits are absolutely obvious,” Russian Foreign Minister Sergei Lavrov said during a breakfast with his German counterpart Sigmar Gabriel on February 18.

Ukraine is scared to death of not only losing the money it collects for the transportation of Russian natural gas through its pipelines but also of losing the strategic importance it has enjoyed since declaring independence. Without Russian natural gas, thousands of kilometers of Ukrainian pipes will turn into nothing but millions of tons of rusty metal. This prospect has already scared off all the potential investors that Ukraine tried to lure into its aging pipelines.

From the platform of the Security Conference in Munich, Ukrainian President Petro Poroshenko desperately appealed to his European colleagues to say a strong European “no” to Nord Stream 2, “which is absolutely not about economic interests but about Russian political and energy expansionism.”

During a press conference in Munich on Saturday, Poroshenko said there were “more than a dozen world-known companies that expressed their interest in the management of our pipelines” and “could provide the transit of natural gas and achieve effective modernization of our gas transportation network.”

On the subject of his country’s pipelines, Poroshenko has been stating his optimism for years, but he avoids specifics. Poland is also among Nord Stream 2’s adversaries.

In an interview with Polish radio, Polish Prime Minister Mateusz Morawiecki stated that dependence on Ukrainian transit keeps Russia from “aggressive actions” against Ukraine. He said, “In this regard, her aggressive actions in Donbass, that is, in the eastern part of Ukraine, are held back to a certain degree by the risk of what would have happened if something bad happened to the pipeline.”

“Today, Ukraine is relatively safe, as it controls the gas pipeline leading to Central Europe. When Nord Stream 2 appears, the gas pipelines going through Ukraine will be cut off,” Morawiecki said in another interview.

“Russia will be able to aggravate the conflict in any way, attack the whole country,” he added.

“Once Nord Stream 2 is built, [Russian President Vladimir] Putin can do whatever he wants with Ukraine,” the Polish prime minister told journalists on Friday, Reuters reported. “And then we potentially have his army on the eastern border of the EU.”

Traditionally, Warsaw is hysterically afraid of Russia and Germany becoming allies, but it’s not only politics for Poland. The country also benefits economically from the current flow of Russian natural gas through its territory and—though it doesn’t admit it publicly—worries that the Nord Steam 2 pipeline would inevitably redirect some, if not all, of it.

Poland made known its plans to build its own natural gas pipeline to Norway by 2022 for $2.1 billion. Warsaw intends to buy 10 billion cubic meters of natural gas a year from Norway, as well as buying American liquefied natural gas (LNG). Russians think these plans are nothing but a bluff in the struggle with Gazprom for a better price on its product. Poland’s contract with Gazprom ends in 2022.

The Polish prime minister called on the United States to impose sanctions on the Nord Stream 2 pipeline, which U.S. Secretary of State Rex Tillerson said last month the U.S government sees as a threat to Europe’s energy security.

Wess Mitchell, assistant secretary for the State Department’s bureau of European and Eurasian Affairs, said last December that Nord Stream 2 is a “political rather than a commercial undertaking” that could slash the pipeline transit payments Russia makes to Ukraine by about $2 billion a year.

But there is only so much the U.S. can do.

With the LNG plant in Yamal being able to produce 16.5 million metric tons annually and having successfully sent two LNG tankers to the world market—which, ironically, ended up in the United States—Russia demonstrated that it is capable of battling the U.S. in LNG markets around the world, including South Asia.

In case Germany changes its mind and kills the project at the last moment, 1520 km of the pipeline to China—or two-thirds of its total length—have already been built, Gazprom CEO Alexei Miller triumphantly reported at a meeting with Russian President Vladimir Putin on February 16. Miller promised, “On December 20, 2019, pipeline gas supplies to the most dynamic gas market in the world—to the Chinese market—will have begun.”

According to the 30-year contract, Gazprom will be selling 38 billion cubic meters of natural gas to China annually.

The Turk Stream pipeline will be completed on time, Miller assured, and it will start delivering 32 billion cubic meters of natural gas per year to Turkey by the end of 2019.

In other words, Russia has made it known that Nord Stream 2 is more important to Berlin than to Moscow. Gazprom’s discovered natural gas resources exceed an astronomical 49 trillion cubic meters, or 17 percent of world reserves, Miller said in his last interview to the Saturday News TV program. No American sanctions could impede Gazprom’s plans—right now 95 percent of its equipment is produced inside of Russia, including all of the pipes, and Gazprom plans to replace the rest of “the critical import” by Russian-made materials in the near future.

“Russia adheres to the rules of the game in the construction of Nord Stream 2 … both in offshore and in terms of the German regulator,” German Foreign Minister Zigmar Gabriel said during a breakfast with Russian Foreign Minister Sergei Lavrov, adding that applying the rules of the Third Energy Package to this project at the last minute “undermines the credibility of Europe.”

(The Third Energy Package is regulation that gives more say to Brussels than individual states on matters of natural gas and electricity.)

Ukrainians don’t buy it because, ironically, Gabriel’s predecessor Frank-Walter Steinmeier guaranteed on February 21, 2014 an agreement to help settle the political crisis in Kiev. He did not deliver.

Gazprom’s Alexei Miller did not even try to fake his understanding of Ukraine’s worries, noting that Ukraine does not play the role in the distribution of Russia’s natural gas that it used to 10 or 20 years ago.

“Deliveries of natural gas to Europe via the north corridor through the Nord Stream 2 pipeline is the shortest route of Russian natural gas supplies, the most efficient and cheapest one,” he said. 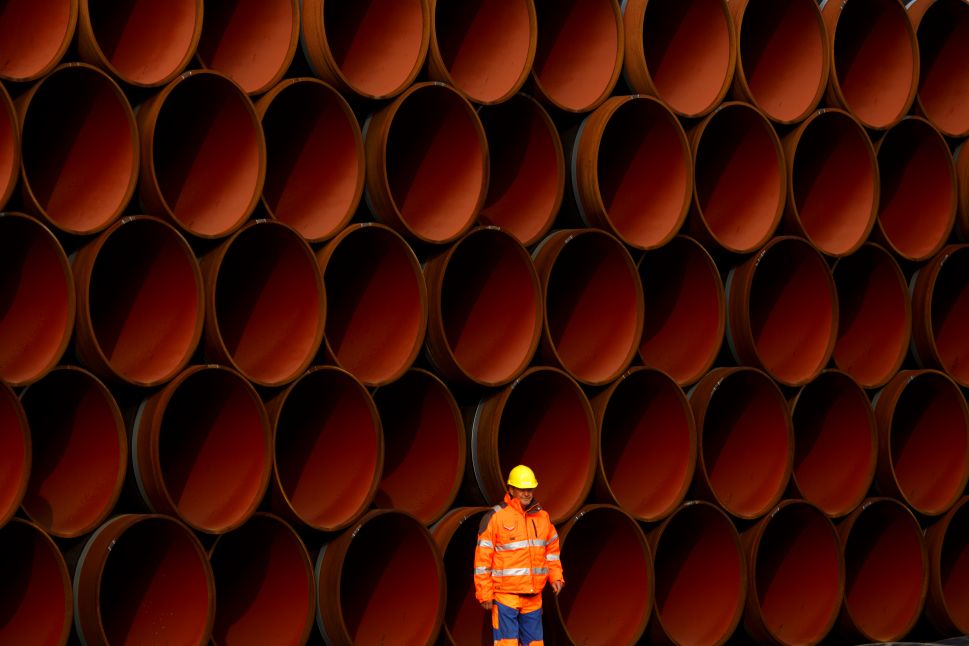