On paper, San Francisco’s war on marijuana was declared over more than a generation ago.

“We, the people of San Francisco, demand that the District Attorney, along with the Chief of Police, cease the arrest and prosecution of individuals involved in the cultivation, transfer, or possession of marijuana,” read the text of Proposition W.

Approved by 63.7 percent of voters in November 1978, it was a clear demand for a ceasefire, and it was supposed to have been the first step toward legalization. However, a few weeks later, the city’s mayor, George Moscone, and California’s first openly gay elected official, Harvey Milk, were assassinated by a former police officer named Dan White.

With them died any impetus to enforce Prop. W. It would take another 20 years—and the grisly toll of the HIV/AIDS crisis—before marijuana would be recognized as medicine, and another 20 years after that for cannabis to become legal.

In that time, arrests and prosecutions continued, with San Francisco arresting and jailing people for marijuana at the same pace as the rest of California. By the mid-2000s, under District Attorney Kamala Harris—now California’s junior senator, and a leading figure in the Democratic Party’s “resistance” to Donald Trump—police in the city arrested between 2,500 and 3,000 people a year for marijuana crimes. Most years, more than 40 percent of people arrested for weed were black, in a city where black people comprised less than eight percent of the population.

On the same night Trump became president, more than 57 percent of California voters approved Proposition 64. Adults 21 and over can now possess up to an ounce of marijuana. Commercial retail sales began January 1 and are expected to reach $7 billion a year. But the great irony in all this—the grave offense—is that very few of the drug war’s central and ongoing ills have been solved.

Police have mostly given up arresting cannabis users, and prisons aren’t full of nonviolent marijuana offenders, but there are still hundreds of thousands of people with marijuana busts on their records. This is no small deal: A felony arrest—any felony arrest—means checking the “felon” box on a job or housing application. For most, that means not getting the job or the apartment.

One of legalization’s promises was amnesty and some justice for offenders whose past conduct is now an insanely lucrative pursuit. And indeed, under Prop. 64, anyone with a cannabis arrest on their record is free to file a petition with the state court system and have their records cleaned. This is an act that usually requires hiring an attorney. But since drug arrests and poverty correlate closely, very few have.

Out of 7,798 marijuana offenders on the books in San Francisco, only 232 have filed petitions to have convictions voided and their records cleared. Throughout the state, where 14,000 people a year were arrested on felony marijuana charges every year in this decade, only 4,885 resentencing petitions have been filed.

More than a million people are eligible, according to the Drug Policy Alliance, yet haven’t managed to find counsel and file the paper.

The message: The war is over, if you can afford it.

Rather than force offenders to pay yet again for the right to have their wrongs redressed, on Wednesday, Harris’s successor, District Attorney George Gascon, announced that his office would do the work for them. Gascon’s people are now reviewing each and every one of the 7,798 marijuana convictions on the books since 1975.

All misdemeanors will be sealed and expunged—gone from the record forever.

All felonies will be reviewed one-by-one. Not everyone is eligible, but as long as the offender never committed a violent felony, isn’t a repeat offender, isn’t a registered sex offender, and didn’t sell weed to anyone under 21, they’ll have their offense reduced for them, no action necessary. It may take up to six months to push all the paper, but it’ll get done.

Gascon’s announcement made headlines nationwide, because automatic amnesty is a feature of marijuana legalization heretofore unseen. Even the thought has taken a backseat to clearing the runway for the market.

In Colorado, which legalized marijuana in 2012, it took five years for legislators to pass a law helping ex-offenders. Last year in Nevada, a few weeks before 24-hour dispensaries opened up on the Las Vegas Strip, Republican Gov. Brian Sandoval vetoed a bill that would have vacated criminal histories. He signed other marijuana laws, which regulated the industry and allowed for up to $70 million a year in tax revenue.

In Canada, where North America’s first nationwide legalization law is set to take effect this summer, Prime Minister Justin Trudeau has promised to deal with amnesty sometime later—after the retail marijuana stores open. Meanwhile, people with marijuana charges are forbidden from opening such a store, leaving a void that’s being filled, in one particularly egregious case, by a former chief of police.

There’s still quite a bit that needs to be done before the drug war can be declared over. Gascon’s move should be seen as the first step toward starting a conversation about how those attendant wrongs can be righted. Having a record fixed to reflect a past “crime” that is now a capitalist pursuit is the least the criminal justice system can do. The fact that it’s taken this long and is being done in only limited circumstances is telling. 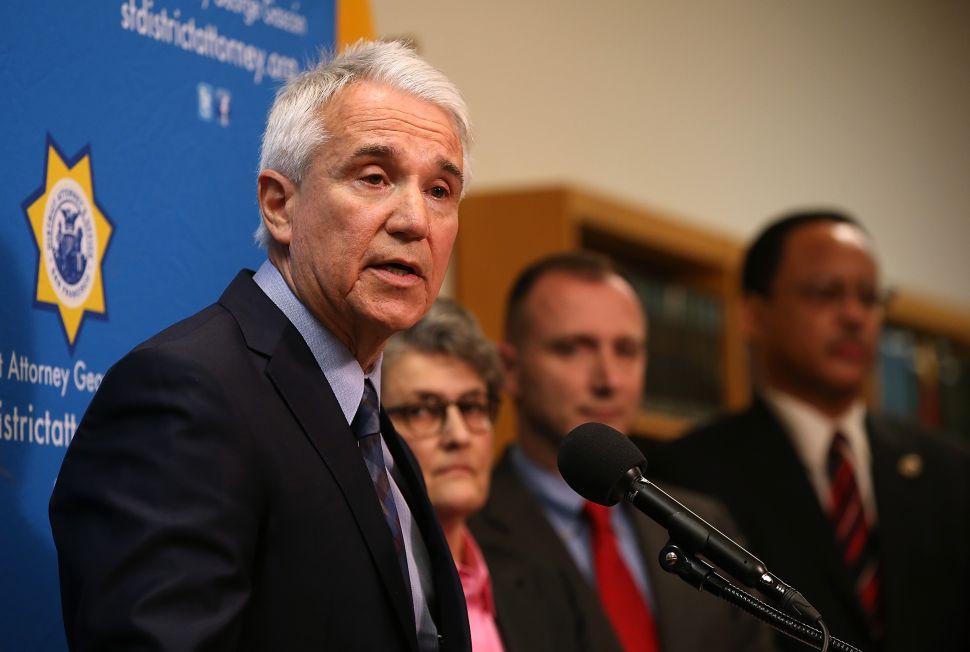