When Jill Geisler, the Bill Plante Chair in Leadership and Media Integrity at Loyola University Chicago, took the stage at last month’s Power Shift Summit, she had a sobering message for her fellow journalists.

“We’re all here because we all failed,” Geisler said. “This all happened on our watch.”

“This” is the current epidemic of sexual misconduct in newsrooms across the country. Geisler was one of 130 journalists who came together at the summit (held at the Newseum in Washington, D.C.) to discuss problems at their organizations and work out possible solutions.

“It was on the record and very frank,” Geisler told Observer.

But she and her cohorts didn’t want the conversation to end there, so they produced the Power Shift Summit Report.

The document, released yesterday, lays out concrete ways that news organizations can make it easier to report sexual harassment (or ideally prevent it in the first place) by training employees and managers to avoid bias and make newsrooms more equal.

Along with this report, the Newseum also launched the Power Shift Project, a series of discussions, podcasts and email newsletters about power shifts in media. All Power Shift materials will be made publicly available online.

Geisler will oversee these programs as the newly appointed Newseum Institute Fellow in Women’s Leadership.

The first Power Shift event, Power to the Interns, will be held on March 2. Geisler said this program was necessary because while media internships give students many of the skills to succeed, they don’t educate them on sexual harassment or ways to avoid it.

“Most newsrooms treat interns like adults,” Geisler said. “But it’s not about whether you’re an adult or not, it’s about the power differential between interns and those with substantial influence.”

Both interns and full-time staffers are also discouraged from pointing out problems in their newsrooms, according to Geisler.

“If you say ‘Hey, I don’t like that,’ you’re considered not a team player or too sensitive,” she said. “But then a lot of people get a pass for bad behavior because they’re talented or popular.”

This also has the ripple effect of driving many aspiring journalists away from the field.

Young reporters who were harassed by veteran journalists like Glenn Thrush or Charlie Rose said they didn’t feel like they could report their problems, and as such believed that the “cutthroat” world of the newsroom wasn’t for them.

“I started to think maybe I shouldn’t be in journalism if I couldn’t hang in a tough newsroom,” Vox reporter Laura McGann, who was harassed by Thrush, wrote.

That’s a tragedy, according to Geisler—and luckily, many newsrooms are starting to realize that.

Since the summit, Geisler said she had been flooded with requests for help from media organizations that want to have “difficult conversations.”

The Newseum has also developed a Power Shift Pledge which newsroom leadership can sign to show their commitment to an empowering, harassment-free workplace.

But while the media world has received the most attention during the current epidemic, Geisler made it clear that the problems stretched across all industries–and as such, each should take a look in the mirror.

“This truly is universal,” she said. “There’s a star system in just about every profession. We need to take responsibility for the past and the future.” 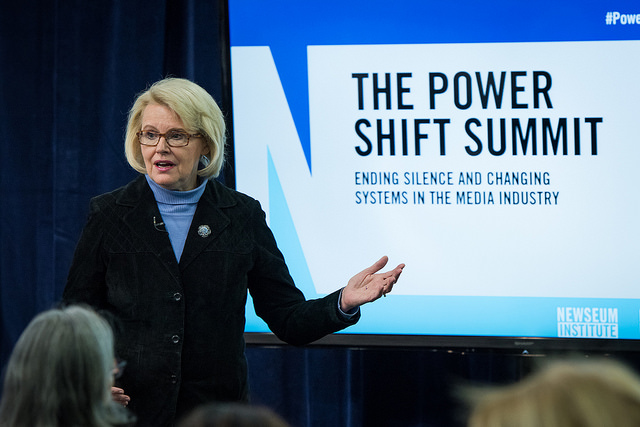