Two writers and actors, both of whom are deaf, have created a show that’s not about being deaf, but about friendship, love and relationships and navigating the world today as 20-somethings. Their perspectives are unique and specific, but the drama, comedy, and emotions of the series are universal. Called This Close, it also stars its co-creators, Shoshannah Stern and Josh Feldman, and hits screens on Sundance Now tonight.

Stern plays Kate, an entertainment publicist who is determined to succeed without any special accommodations. Feldman is Michael, a gay graphic novelist who is suffering from  a bad break-up and writer’s block, using liquor and sex to cope. Also in Kate’s world are her demanding boss (Cheryl Hines) and her fiancé (Zach Gilford), both of whom frustrate Kate to no end.

“I see [this show] as a beginning, as a model, really, for something that wasn’t there before,” said Stern at a recent press event. “We’re the first show written, produced and created by deaf people. We’re hoping to show that representation matters not only in front of the camera, but behind the camera as well. Every community has the right to tell their own story.”

Feldman explained how the individuals on The Close differ from commonly portrayed deaf characters, saying, “In the past, when deaf characters are represented or introduced, it’s because they’re deaf. The sole purpose that they’re in the story is because they’re deaf. With this show, Kate and Michael are deaf, yes, but they are so many other things too, and I think that’s new.”

Not everything is so serious in the narrative, revealed Stern. “Life is a little funny sometimes. As deaf people, if we don’t have a right to make fun of ourselves, then who does? You know, honestly, being deaf can be a little funny sometimes. We would be remiss if we missed an opportunity to laugh. Hopefully we make everybody else laugh with us.”

“You have to have a sense of humor about stuff. Life would be very boring, otherwise,” added Feldman.

In fact, some of the humor came behind the scenes, with the hearing actors and their attempts to learn sign language.

Stern laughed as she pointed at Gilford and said, “Zach invented his own form of A.S.L.—Z.S.L., actually.”

Gilford answered with, “I was very fortunate that my character was not very good at signing. One of the jokes on set was that I created Z.S.L. Then, [guest star] Colt Prattes came in and made me just look like an asshole, because he was signing away, and I was like an idiot.”

Prattes explained that he learned the skill doing theater. “I had worked with a director who works a lot with the Deaf West Theatre Company. So, I had a just enough experience to kind of muddle my way through the audition and be able to converse a little bit. Since then, just like my character, I have been able to just learn every day.” He added, “The best thing about it is it’s a new language, so you’re on set, and you’re learning a whole other culture and a whole other language.”

He went on to say, “It wasn’t just that Shoshannah and Josh who were deaf [on set]. There were crew members, there were P.A.s, there were make-up artists. One of the things that we’ve all talked about a lot is that sign language asks you to be active. It asks you to listen. So, you have a whole community of people who want to listen to each other, that actively are paying attention.”

One actor was keeping a small secret from the creators about signing, as Hinds revealed. “I didn’t tell Josh or Shoshannah that I took A.S.L. in college because I didn’t want them to think that I remembered any of it.”

She laughed as she added, “I remember “toilet.” Yeah. That’s one that I remember.”

How does learning A.S.L. also serve as form of acting prep? Stern explained, “The face has so much to do with A.S.L. You can’t separate the face from the hands in American Sign Language. It’s impossible. What you see on the face, the expressions, and what you see on the mouth has so much to do with what you sign. You have to really use the whole body.”

You could say that signing actually sets you up for being a better actor—teaching you how to use your whole body to communicate. And of course, as with anything, there are levels of expertise.

“There’s a huge difference between interpreters and [the] A.S.L. masters [we had] on set,” Gilford said. “Interpreters are people who interpret and then there would be an A.S.L. master who would watch and come and say, “I know you’re signing it this way, but you’re going to get your point across more if you sign it in this way.”

Elaborating more about the role of those on-set specialists, Stern said, “The A.S.L. masters serve as visual lenses for all of the actors, for the director, for everyone who’s a part of making this, to make sure that the sign is in the frame, to make sure that we are not missing a sign; not slurring our words, that the signs in fact match the characters. They’re invaluable. People often think that A.S.L. masters are there to help hearing people to learn how to sign a line, which is partially true, but it’s one very, very small aspect of the job that they do.”

Stern, summing up the underlying theme of the series, said, “There is no such thing as a deaf world, or hearing world. There is really just one world that we’re all living in, and we’re just shifting a perspective on that world a little bit, and hoping that our characters feel familiar to you.”

‘This Close’ is available on SundanceTV’s streaming Sundance Now. 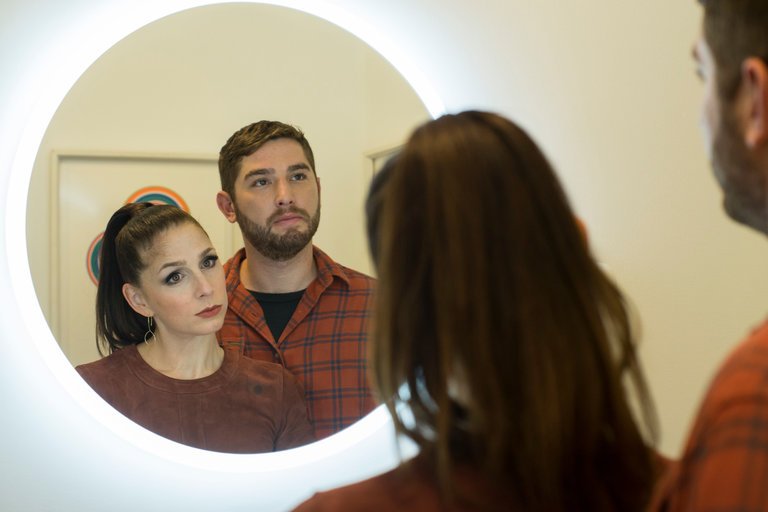