The first episode of Our Cartoon President on Showtime began with a spoof of Fox & Friends, President Donald Trump’s favorite television show. Speaking on camera was co-anchor Brian Kilmeade (all characters were cartoons).

“Mr. President, rise and shine!” Kilmeade said. “And I love you!”

The second episode began with a spoof of Sean Hannity, whose prime time show on Fox is Trump’s second favorite weekday program.

“We begin tonight with a correction,” Hannity said. “Last week, I said the Devin Nunes memo is Watergate times a thousand. In fact, it’s the asteroid that killed the dinosaurs times a million.”

But the best cable news spoof on this Steven Colbert-led production might have been the one about MSNBC’s Rachel Maddow and her maddening narrative digressions. The animated drawing of her was pretty good, too.

“Lotta news to get to,” Maddow said. “A rare win for the Trump administration. But, first: September, 1995. New York. Manhattan. JFK Jr., son of President Kennedy and his wife, Jacqueline…”

If Our Cartoon President stuck to satirizing cable TV news, it might achieve greatness in its first season on a 10-episode run. The first two episodes aired last Sunday, and the rest will be broadcast on Sunday nights at 8 p.m.

However, this new endeavor turns both the Trump family and the White House staff into characters in a full-force, double-barreled sit-com sendup that tries maybe too hard to do too much. It is a little like watching The Simpsons if written by the staff of Beavis and Butthead.

Sometimes, it works. The Trump character is voiced brilliantly by Jeff Bergman. Some of the best stuff has a note of pathos, as when Trump vows to “win” the State of the Union Address.

“That applause, it’s gonna be huge,” Trump says. “So huge that it might finally fill the hole in my heart left by my callous, unloving father.”

In a dinner table scene with other family members, she answers when Trump asks how her day went.

“Well, I woke up,” Melania says. “I got coffee. I put a little white sand in the coffee. I said hello to the army man. I said, ‘I’m the First Lady.’ Then I went and did my crying. Then lunch. Today, it was soup. Then, more crying. Then, Ellen!”

Melania Trump is a minor character in this show but one who might earn more dialogue and plot lines. Her face is drawn like those of the four queens in a deck of playing cards.

Her voice is like that of Natasha, the Russian spy on Rocky and Bullwinkle in the 1960s. Does anyone remember the satirical “Judy Agnew’s Diary” in the National Lampoon during the Nixon administration of the 1970s?

This First Lady character has the potential to be that good. Trump can never remember her name, once calling her “LaGuardia.”

But the show at large is like watching a baseball slugger who either hits a home run or strikes out, nothing in between. The pace is almost too brisk. The gags go by as fast as cars on a freeway so there’s little time to savor the good ones or groan over the bad ones.

Trump is portrayed as a blend of Fred Flinstone, Ralph Kramden and Homer Simpson. The treatment of Trump’s adult sons, Don and Eric, borders on cruel. The character of Ted Cruz should either be revamped or shed. Humor about a creep need not be this creepy.

“I also enjoy the occasional punch in the butthole,” Cruz tells Trump. Yeesh.

Other bit players fare better with less exposure. There is a dead-on-perfect Mitch McConnell, toasting Trump and remarking on their early differences.

“He’s turned a corner and decided to do things the Washington way,” McConnell says, “and I’ve agreed to value expediency over my conscience.”

Even better is a Stephen Miller character already worthy of a spinoff. Miller writes Trump’s State of the Union Address while suspended almost naked by hooks from a ceiling, his laptop surrounded by burning candles.

Miller delivers the script to Trump with the title page “Blood Horizon” and reads a passage to him in the Oval Office.

“And, lo, the tide of Caucasian might will crash down on the shore of Chicago, turning Lake Michigan’s seas red with the blood of the irredeemably unemployed…”

But the best lines go to the TV anchors. Hannity breaks for commercials with teases like:

“When I return, Sebastian Gorka and I will skip a Dreamer across the Rio Grande,”

“When we come back, Rudy Giuliani and I will talk over a black doctor, and later, we’ll watch an American flag throw a football. Roll the reverse mortgage ad!”

Still, the last word must go to Kilmeade, who gives Trump only a 9.9 on a scale of 10 for his State of the Union speech. As cartoon Kilmeade explains:

“A tiny part of my brain—and it’s so small—but it’s screaming that all of this is completely wrong.” 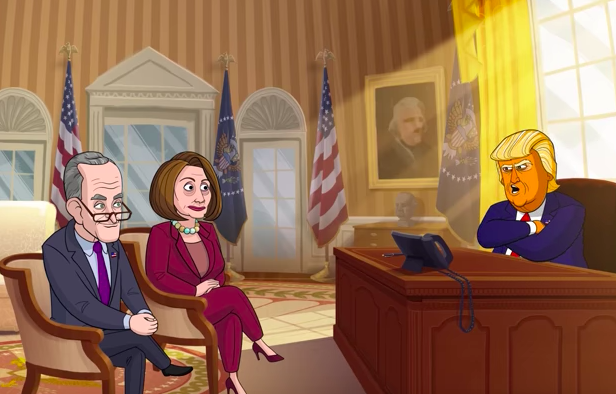