The upcoming landmark Jasper Johns retrospective at the Whitney isn’t due until 2020, but L.A. is getting a teaser with “Jasper Johns: Something Resembling the Truth” at the Broad, open through May 13. A collaboration with London’s Royal Academy, the sprawling show features 120 paintings, sculptures and drawings marking the largest exhibit of Johns’s work ever shown in California and his first museum survey here since 1965.

Defined by motifs that occur throughout his body of work, including targets and numbers, Johns’s career began with Flag, which sparked a revolution when it appeared in 1958. The art world was nearly a decade deep in Abstract Expressionism when this 3.5-by-5-foot encaustic replica of the Stars and Stripes turned up at the Leo Castelli Gallery. In an auspicious debut, Johns sold three paintings (two targets and a numeral), to Alfred Barr, founding director of MoMA. It was rumored the museum wanted to purchase Flag but were concerned about its political overtones.

“MoMA was worried that the flag would be seen as a complicated gesture inside of America at that time, that people would be confused as to what Johns was doing as either a patriotic act or its opposite,” the show’s co-curator Ed Schad told Observer about the museum’s attempt to obtain the work by asking architect, Philip Johnson (long associated with MoMA), to purchase it with the understanding it would eventually enter their collection.

Artist Billy Al Bengston, one of L.A.’s original Ferus Gallery “Cool School” practitioners that included Ed Ruscha, John Altoon, Larry Bell and others, first saw Johns’s work at the Venice Biennale in 1958. “I saw Jasper Johns’ Flag and that was it. I didn’t see anything that looked like art in Venice after that,” he recalled to Observer. “It’s just that it was so blatantly in your face. They weren’t chicken shit.”

Identified as Neo-Dada at the time, works of this period were later relabeled Proto-Pop as the sixties ushered in a new kind of art. “The pop art thing…I felt like the artists who were associated with that were artists that were frustrated by the tone of art being created at that time, which was Abstract Expressionism,” Ed Ruscha told Observer. “I think these artists felt there was no room within that realm—Abstract Expressionism and abstract painting. There was very little room to move within that because so many people had attacked it and solved it.” He told an audience at the opening of the exhibition that his first glimpse of Johns’s Flag blew his hair back.

Johns focused on what he famously called “things the mind already knows.” That wasn’t just a reaction to Abstract Expressionism, but aimed to provoke viewers to question fixed perceptions. Text and numbers played a major role, influencing subsequent artists like Ruscha, John Baldessari, Roy Lichtenstein and others.

If Johns paints the word “red” on yellow, as he does in 1959’s False Start, does that make it red or yellow? It’s a conundrum that dates at least to Marcel Duchamp and his use of found objects and “readymades,” or even to Rene Magritte, whose The Treachery of Images has the phrase “this is not a pipe” written under what isn’t a pipe but an image of a pipe.

Common objects provided a way out of Abstract Expressionism, and “Something Resembling the Truth” is full of them. There’s a Saverin coffee can holding paintbrushes, a sculpture of a flashlight and light bulb, a broom and teacup attached to a canvas and three versions of a map of the United States. This image was based on a map given him by his collaborative parter and lover Robert Rauschenberg. The two met in 1954 and worked together designing window displays for Tiffany’s during the day, while evenings and weekends were spent in their paint-smeared apartments devising a palette and visual language that would redirect twentieth century art.

It was on a visit to Rauschenberg’s studio in 1958 to discuss an upcoming show that Leo Castelli first saw Johns’s work and decided to show him instead. Rauschenberg and Johns’s romantic involvement was said to have ended in 1961, and one can see the influence of this event in the work of the latter as he turned to a darker palette of grays and black in works like Map and In Memory of My Feelings—Frank O’Hara, both painted in the early sixties.

The son of an alcoholic farmer in South Carolina, Johns was three when his parents divorced and he was sent to live with his grandfather. An itinerant childhood between relatives often left him feeling like a guest in his own home. After attending University of South Carolina he moved to New York and enrolled in Parsons School of Design.

Drafted during the Korean War, Johns was stationed in Fort Jackson, South Carolina. Upon returning to New York in 1954, he met Rauschenberg and began pursuing art in earnest while collaborating with performance artist Rachel Rosenthal, choreographer Merce Cunningham and composer John Cage.

These days, Johns is recognized as one of the most influential living American artists and was awarded the Presidential Medal of Freedom in 2011. Along with Jeff Koons, he is the country’s top-selling living artist with Flag going for $110 million in 2010. False Start fetched $80 million in 2006, while a Flag from 1983 sold for $36 million just a few years ago.

Rauschenberg passed away in 2008, but Johns is still going strong at 87; the latest piece in the show is dated 2016. He consulted on the new exhibition’s layout in London and Los Angeles when parties met with him at his home in Sharon, Connecticut.

Typically laconic, Johns has always been reticent about explaining his work, leaving that to scholars and art historians. But if truth is beauty, as Keats insists, then perhaps we can better understand what Johns means in this quote touted in the exhibition’s collateral material: “One hopes for something resembling the truth, some sense of life, even of grace, to flicker, at least, in the work.” 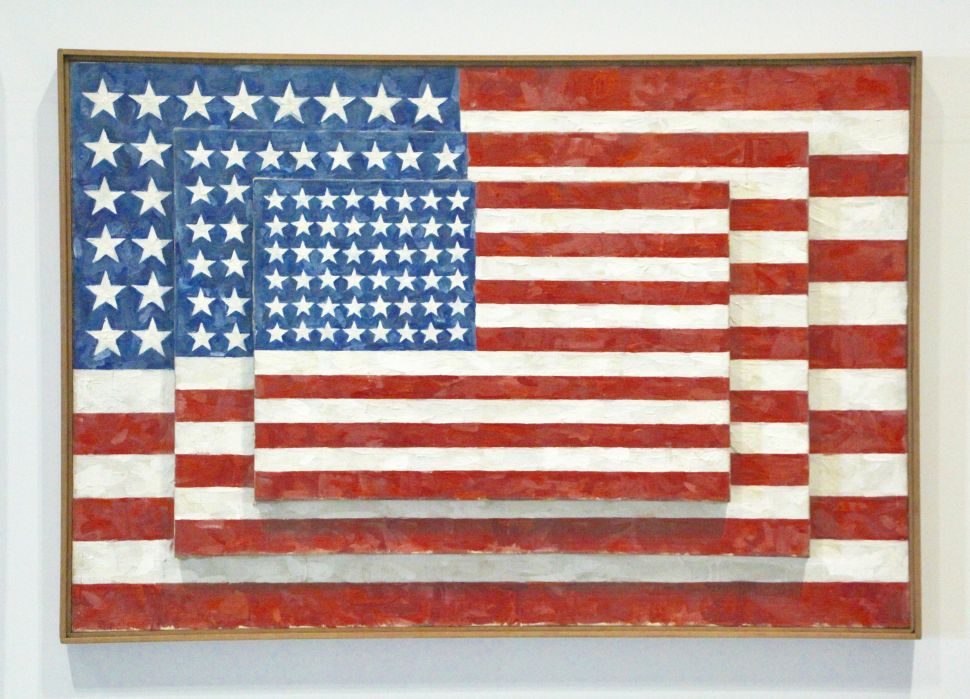