Until Wednesday’s slaughter of 17 people at a high school campus in Florida, the term “St. Valentine’s Day Massacre” referred to a gangland blood bath in 1929 on the North Side of Chicago.

Al Capone’s crew eliminated a few of Bugs Moran’s boys in a cold-blooded execution over booze during Prohibition. Just business. Those were the good old days.

Know how many people died that day in that Clark Street garage? Seven. Less than half the total killed this week by a troubled 19-year-old man with a legal, semi-automatic rifle.

And those bullet-riddled gangsters in the Roaring Twenties were not innocent high school kids like the ones shot dead by Nikolas Cruz on a day celebrating love with posters and cards showing blood-red hearts.

First, the bulletins. Next, the shaky videos. Then, the disappearance of commercials followed by the death toll, the “thoughts and prayers,” the news conferences, the eye-witness interviews, the preliminary political polemics, the candlelight vigils, the somber, slow piano music and the weeping.

Much of it was riveting and repulsive at the same time. But one extraordinary moment came on Tucker Carlson Tonight on the Fox News Channel Wednesday, when anchor Tucker Carlson interviewed Fox contributor Rick Sanchez on the split screen from Parkland, Fla.

Sanchez grew up in the area. His daughter is a high school student with friends at the attacked school. Near the end of a powerful segment of more than six minutes, Carlson asked Sanchez about videos he’d seen on his daughter’s smart phone.

Sanchez paused and shook his head.

“Well, they show dead bodies,” Sanchez told Carlson. “They show panic. They show children running and screaming. They show what is left after someone has been riddled with bullets.”

Sanchez said the videos also showed “courageous, heroic police officers” running into the classroom and lifting out wounded students over their shoulders. He clenched both hands into fists and moved them upward to show how the cops did it.

And the videos, Sanchez said, “show the panic that ensued in the moment that the shooting actually took place and you hear the fear, the screams, and the voices of these children.”

Sanchez performed with an eerie blend of genuine hometown horror and detached professional cool. Behind him, on a dark street near the school, a light atop a police car flashed against nearby buildings. Carlson wisely asked only short questions and didn’t interrupt long answers.

Sanchez, a middle-aged professional, marveled at how today’s teens now can compile some news stories faster than “we who call ourselves ‘the media.’”

The relatively recent blend of miniature television cameras with portable telephones has made everyone who carries one a potential TV reporter who can communicate facts and truth before the pros.

“(They) were onto the story,” Sanchez said of the students, “sharing ideas, sharing thoughts and, most of all, sharing videos and sharing the information that the suspect, Cruz, had apparently been saying about himself, almost revealing exactly what it was he was going to do even days before he actually did this.”

The Carlson-Sanchez conversation was hardly the only dramatic moment. On NBC Thursday, former Fox anchor Megyn Kelly expressed the sort of angry despair felt by many parents about American laws.

“Don’t even think about it,” Kelly said. “No gun reforms are getting through. They’re not.”

She blamed the National Rifle Association.

“The NRA is too powerful,” Kelly said. “Our politicians are too weak. And the guns are too ubiquitous. Guess how many guns there are in America. Do you know? Over 300 million.”

Kelly added that President Donald Trump would be wiser to spend $25 billion on gun safety rather than a border wall against Mexico.

In heavy rotation on CNN Thursday was an anguished interview with Lori Alhadeff, whose daughter, Alyssa, died in the school.

“President Trump!” she shouted, holding a microphone in front of her “You say ‘What can you do?’ You can stop the guns from getting into these children’s hands… You can do a lot!”

She spoke before a row of angel statues in front of a big building. Behind her, a group of boys carried an American flag. Alhadeff said she’d just spent two hours arranging her daughter’s funeral and burial.

Also on CNN, analyst Phil Mudd broke into tears Wednesday and cut short a report. All networks often showed the still photograph of two women—one with red hair, the other blond—hugging and sobbing.

On the blond woman’s forehead was a dark, gray cross of ashes in observance of Ash Wednesday. Around her neck was a gold heart necklace in honor of St. Valentine’s Day.

Based on the book of Genesis, the Catholic ceremony opens the Lenten season of penance and is a meditation on the human body after death.

Just by coincidence, Ash Wednesday this year fell on both Valentine’s Day and the afternoon of yet another school massacre.

In the prayer of the ashes, the words pertain to the temporary and fragile nature of life.

“Remember, man, that thou art dust,” it says, “and unto dust thou shalt return.” 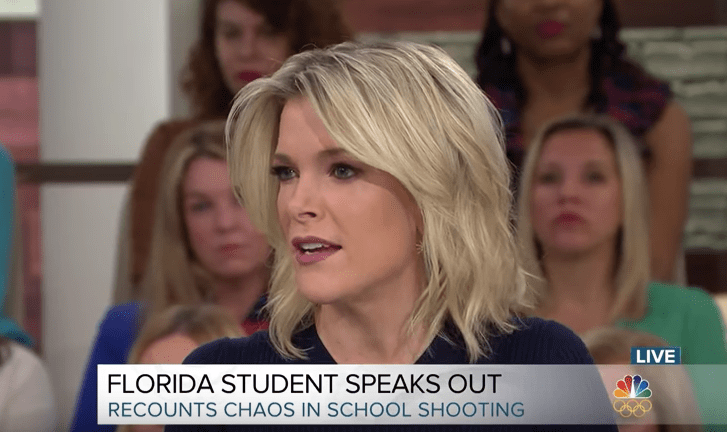