Never coy but often coital, Karley Sciortino, 32, characterizes a “slut” as someone who has no moral obstacles between herself and the unique pleasures that make her a fully actualized human being. By re-claiming a vicious word and examining it through first-hand research, she offers an honest look at cultural norms. “Being a slut is not necessarily about having a high body count,” she declares in her new book, Slutever: Dispatches from a Sexually Autonomous Woman in a Post-Shame World. “It’s about being sexually activated.”

By her definition, a slut can be a loyal friend, a believer in God and a faithful partner within the bounds of a serious relationship. It’s more like “I feel so comfortable with you that you inspire me to push my boundaries and explore my body in new ways,” than “I’ll sleep with anything that comes my way.” And if a woman has naturally high sex drive, like Sciortino’s, her stamina may be based on biology, not a childhood trauma or mental disorder.

Published in the midst of the #metoo movement, Slutever boldly reveals Sciortino’s personal brand of feminism.“If we want to be able to have the same sexual freedoms that men have, we can’t be fragile,” Sciortino told Observer in a recent conversation. A peroxide blonde with an instinctual hair flip, you might recognize her from Netflix’s Easy, or have caught her new documentary series on Viceland, also called Slutever. The latter appearance sees her searching for female orgasm services. If a man can buy a happy ending massage, she reasons in the first episode, a woman should be able to as well—without a display of passivity.

“Of course I believe sexual assault is real and should not be tolerated under any circumstances,” she said. “But assault is separate from the concept of victimhood. Female sexual victimhood comes from the outdated and destructive idea that men are getting something and women are giving something up. If men and women approached sex equally with the premise that they both have something to gain rather than lose, the concept of a hapless female victim there for taking would no longer make sense.”

Bad dates are part of the learning curve, she said, noting that Harvey Weinstein’s abusive behavior doesn’t compare with awful hookups on Tinder.

“To me, feminism is about the freedom to make decisions and take more responsibility, sexually and otherwise,” she said. “We almost have to kick feminism out of our beds. There’s a lot of baggage that is like, ‘Thou shalt not be objectified; thou shalt always be offended by men’s pervy remarks.’”

Although Sciortino never finished college—she dropped out after one semester in a London theater school—she carries herself with the zeal of an overachiever, one who also happens to wear P.V.C. leather.

Raised Catholic in an Italian-American family in upstate New York, she was captain of the varsity soccer and basketball teams, editor of the senior yearbook, lead in the high school play (Gentlemen Prefer Blondes) and nominee for prom queen. Her father wanted her to attend West Point Military Academy. But even with two conservative religious parents—a dad in the Knights of Columbus and a mother who chatted out loud with Jesus—Sciortino experimented with several partners as a teenager.

Like her heroes Madonna and the pro-sex feminist Camille Paglia, Sciortino found that nothing was more arousing than strict rules to break.

“Sex was a shortcut to intimacy and figuring myself out,” she mused. “I’ve learned empathy and my own boundaries about what makes me feel happy, confident and supported.”

After high school, she squatted in an abandoned London factory with 10 other people. As a college dropout without a job, she had copious amounts of time to gather stories about her bohemian roommates. In 2007, she launched her blog, Slutever, that led to writing jobs with Vice and later Vogue Magazine.

As much as she overshares (to the delight of fans), she’s also kept some things back. She writes in Slutever about her stint as a sex worker—the first time she’s delved into those experiences.

“One reason I’ve kept this a secret for so long is because, like most people, I have parents,” she writes. “Specifically, Catholic parents.”

“Sugaring” removed financial stress so she could be a writer. With a higher income, she could afford a decent colorist and wardrobe that helped her land the position at Vogue. Ironically, her time as a sex worker felt less exploitive than web-based journalism offering $350 for a cover story or nothing at all for the glory of growing an audience. It sure beat waitressing at $10 an hour.

And it provided her interview access to other sex workers, who commonly feel misunderstood. Despite an in-your-face approach, Slutever’s strongest message is about not assuming anything, about an individual or even the self.

“I’m bi-coastal and bi-sexual,” she joked about splitting her time between New York and Los Angeles. But then she changed her mind and clarified that “sexually flexible” is the term she prefers. Predominantly straight, she is now in a relationship with “a full-fledged male person,” she quipped.

Though not everyone appreciates her libertine humor.

“I’m proud of having internet trolls,” Sciortino boasted. “If you’re going to have any philosophy or transgression or new idea, there’s going to be backlash.”

This confidence stems from an unlikely source—her parents. Though they worry about her, she credits them with instilling her with a sense of stability. Her mother, she recalled, taught her to say “thank you” to insults. Sciortino dedicated Slutever to her mom, “who I love dearly, but who I might not let read this book.”

It’s in the acknowledgements that you find who this book is really for. Verbally wrapping her arms around all the promiscuous peoples of the world, Sciortino reminds them: “you are loved.” 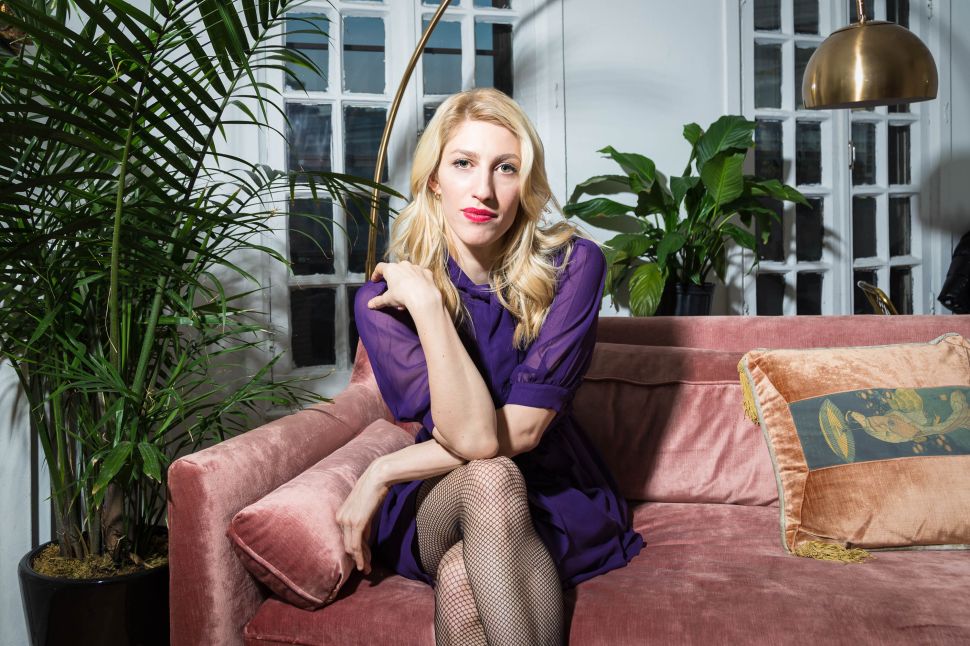