“These allegations are deeply troubling,” said Shah. “I think it’s fair to say that we all could have done better these last few days in dealing with this situation.”

The Trump administration has scrambled to respond after two Daily Mail reports this week described physical and emotional trauma inflicted by former White House Staff Secretary Rob Porter on his two ex wives. After sending out several statements to The Daily Mail on Tuesday evening in support of Porter—where White House Chief of Staff John Kelly described the aide as “a man of true integrity”—the administration walked back its support amid reports that senior officials knew about the allegations.

“I was shocked by the new allegations released today against Rob Porter,” said Kelly in a statement after the second Daily Mail report with new allegations against Porter broke.

“There is no place for domestic violence in our society,” he continued. “I stand by my previous comments of the Rob Porter that I have come to know since becoming chief of staff, and believe every individual deserves the right to defend their reputation. I accepted his resignation earlier today, and will ensure a swift and orderly transition.”

Shah told reporters that both “statements were crafted by a number of senior White House officials.”

President Donald Trump was first made aware of the allegations against Porter on Tuesday night and was informed of the official’s resignation on Wednesday. Shah also asserted that Trump was not “informed of the specifics” of why Porter was unable to secure a security clearance while working at the White House, which reportedly had to do with the accusations against him.

“He was surprised. He, like many us, did not see that in Rob Porter,” Shah said. “He was disheartened by it, he was saddened by it.”

The ominous tone in the press briefing changed when a reporter asked about former White House aide Omarosa Manigault’s recent appearance on Celebrity Big Brother warning that America was not “going to be O.K.”

“Omarosa was fired three times on The Apprentice,” said Shah. “She had limited contact with the president while she was here, she has none now.” 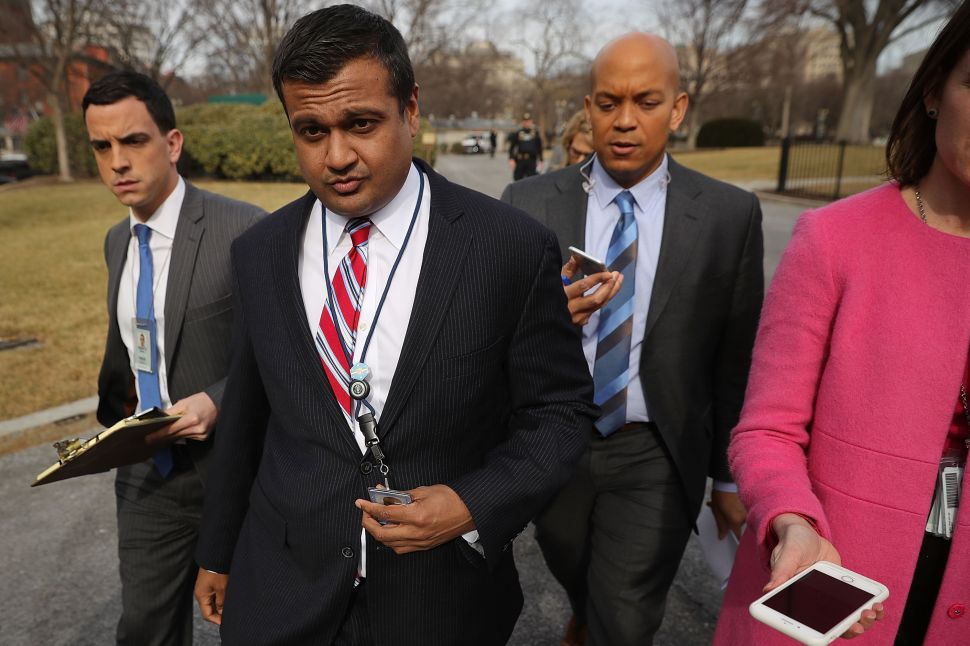