The 2018 Winter Olympic games have ended, leaving us with immense pride in our athletes, some sore spots best left for time to heal, and undoubtedly with questions about the future. Central to these games was the idea that its location in PyeongChang could potentially help thaw relations between North Korea and South Korea, and by extension, the rest of the world. But how realistic is it to put that kind of hope in sporting events? Opinions have long divided into two camps. One side extols the virtues of the Olympic games, viewing it as a road to peace and unity. The other views international sport through a much darker prism—producing divisiveness and domination and even war itself.

Olympism “exalt[s] and combin[es] in a balanced whole the qualities of body, will and mind,” the Olympic charter proclaims. The Olympic Movement’s fundamental goal: to allow sport to serve “the harmonious development of humankind”—i.e., to allow sport to “contribute to building a peaceful and better world.” Peace and love, balance and international harmony, all through competitive sport.

There’s no denying it. From time immemorial sport has been intimately connected to war. For tens of thousands of years humans struggled to survive—escaping predators or chasing prey. Whether offensively on the attack (for food or territory) or in defense of home and family, the best athletes survived and reproduced. The weaker ones did not. Children witnessed their parents’ struggle, and, as all young mammals seem to have a play instinct deeply embedded in their DNA, they frolicked in mock combat while preparing to take their place in that never-ending collective struggle for survival. The earliest origins of sport can be traced to this play.

But sport does more than prepare us for real life conflict. I am of the camp that says sport can liberate us from it. We can think of sporting competition as domestication of war.

As Homer recounts, at the end of the Trojan War great military combatants put aside their hostility to engage in civilized contests of speed, strength and precision. The ancient Greeks somehow suspended warfare during the Olympics, with the ancient Olympic Council declaring and enforcing a sacred truce. For 1,100 years without fail, the Olympics took place in Olympia—to and from which location even mortal enemies could travel unharmed. The modern equivalent of the Olympic Council, the I.O.C., could hardly match that record. The Olympics were suspended during both World Wars.

Ancient Olympic sports included boxing, wrestling and chariot racing, are obviously derived from war. Even today, many competitive sports still show clearly their warlike or hunting origins. Think archery, javelin, rowing, boxing, wrestling, fencing, judo—even, arguably, shot putt, jumping and sprint. In Nordic lands, skiing as a means of locomotion dates back at least 5,000 years. And a few centuries ago, northern hunters and soldiers combined shooting with skiing—obtaining food and territory once again serving as the impetus for advancement. And so in 1767 the biathlon emerged, when Scandinavian soldiers converted primal urges and survival skills into another controlled, rule-bound athletic contest combining upper and lower body strength, stamina and precision.

“Serious sport has nothing to do with fair play,” Orwell insisted. “It is bound up with hatred, jealousy, boastfulness, disregard of all rules and sadistic pleasure in witnessing violence. In other words,” he famously concluded, “it is war minus the shooting.”

Obviously Orwell never witnessed biathlon. Of the dozens of fierce contests these Olympics produced, the men’s mass start 15-kilometer biathlon, so clearly warlike in its origins, so clearly pacific in its practice, ranks for me as the most exciting of the 2018 Winter games.

After 35 grueling minutes, with many twists and turns and reversals, Martin Fourcade from France, one of the greatest biathletes of all time, and Simon Schempp from Germany, found themselves sprinting for the gold, dead even with a hundred meters to go. Approaching the finish it was Fourcade, then Schempp, Fourcade, Schempp. They lunged. Fourcade slammed his ski pole in frustration, believing he had been nipped at the line. But the camera revealed his foot crossing the barest fraction in front of Schempp’s. Fourcade had won gold; Schempp silver. And we, the spectators, had been treated to a sporting battle, including the shooting—a fight to the photo finish.

Philosophers of sport have long observed a paradoxical relationship between adversaries: Scott Kretchmar argues compellingly in his seminal essay that all sporting contests are at some deep level also cooperative: Contestants agree to share a test. In an essay published after Kretchmar’s, Paul Gaffney adds that competition ambiguously includes an “attempt not only to outdo the other’s performance but also at the same time to improve the other’s performance.” Thus contestants are at once “facilitators and obstacles.” In the end, nominal adversaries, as Robert Simon argues in Fair Play, really engage in a “mutual quest for excellence through challenge.”

“A competitor needs a worthy opponent,” Gaffney explained. “No one else in her circle—not her coach, not her trainer, not her fans, not the people who love her—can provide her with the satisfaction that she craves, precisely because they all want her to win.” Only her opponent, who “acts like an enemy” doing everything in her power to frustrate her, can enable the winner to reach her goal. That’s the basic “paradox of competition.”

These games have shown us intense contests between determined opponents giving their all to beat each other—playfully. This Olympics, as with all great sporting contests between fierce adversaries, has demonstrated clearly that the opposite of “playful” is not “serious”—it’s “real.”

That fundamentally distinguishes war from sport.

And yet we do describe sporting contests of all sorts—even those that display no remnants of warlike origins—in warlike terms: “Relive the thrilling shootout from team U.S.A.’s win over Canada,” NBC headlined its streaming replay of the Gold medal women’s hockey game. And who will forget the women’s individual figure skating finals: “All eyes on the ladies’ free skate as the dynamic duo battles for gold” the NBC headline declared.

What a battle it was, with the world’s two greatest female figure skaters—Russians Alina Zegitova and Yevginia Medvedeva, fighting to the finish, giving it their all. “When we take the ice it’s sport and we must fight. Every competition I feel like [is] a little war,” Medvedeva declared. And yet, after the contest was over they hugged, because sport as an honest contest between two evenly matched opponents rightly ends in gratitude from each competitor for how they have been tried and tested.

Almost 3,000 years ago, Hesiod, the second great historian of record, anticipated Orwell and like-minded critics of sport by distinguishing “two types of strife, all over the earth.” One type “fosters evil war and battle, being cruel.” All people rightly detest this, Hesiod insists. But the second, a competitive spirit “far kinder to men” drives us to greater achievements.

Hopefully, but improbably, the 2018 Winter Games will go down as the “peace Olympics,” which ushered in North and South Korea’s rapprochement that made the world safe from its most immediate nuclear threat. But whether this proves naïve, we still cling to a hope that good strife in the form of vigorous physical contest will, as it did in ancient times, bring the world together—substituting for war at least for a moment, thereby ennobling us all. 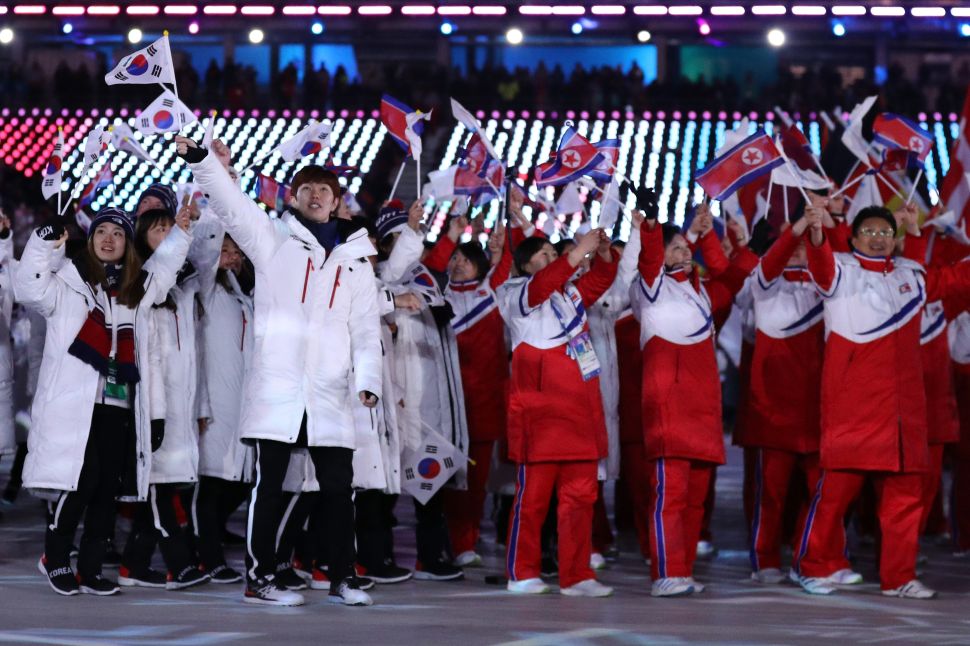