Amazon is redefining the experience of retail—both online and in real stores.

About two months into the opening of the first checkout-free Amazon Go store in Seattle, two Amazon executives behind the project shared an early assessment of whether or not the pilot is a success. They also revealed a few interesting findings regarding shopper behavior.

“What we didn’t necessarily expect was how many people would stop at the end on their first trip or two and ask, ‘Is it really O.K. if I just leave?'” Gianna Puerini, Amazon’s vice president who leads the Amazon Go project, said at ShopTalk, a retail industry event, in Las Vegas on Sunday.

“The ones who work very close, like in the building up above, will come down even just to grab a drink because it’s so fast and easy,” she said.

Amazon opened the Amazon Go store as an experiment for future brick-and-mortar retail. At first glance, the Amazon Go store doesn’t look wildly different than a regular grocery store, except that it doesn’t have any cashier stations or spaces to form lines.

To shop there, customers scan their phones at the entrance of the store; the Amazon Go app then keeps track what shoppers pick up, adds every item into a virtual shopping cart—just as on the Amazon website—and charges them after they leave the store. If a shopper takes an item off the shelf and then put it back, the app will remove it from the virtual shopping cart.

“It’s such a weird experience, because you feel like you are stealing when you go out of the door without [paying],” a shopper said in a video interview with Elite NWO Agenda in January when the pilot store opened.

It’s a little surreal to imagine the precision of the tracking technology it takes to realize this level of automation.

Each item in the Amazon Go store is labeled with a unique graphic “ID” in various arrangements of dots. These items are constantly watched by numerous movement-detecting cameras on the store ceiling that track the movement of each item, as well as the movements of shoppers. The same kind of camera is used as “eyes” in self-driving cars.

But the technology isn’t perfect yet, said Dilip Kumar, vice president of technology of Amazon Go and Amazon Bookstore, who shared the stage with Puerini.

One of the biggest challenges, Kumar said, is training computers to discern highly similar products, such as a sugar-free Red Bull drink and the regular version.

“If you show a child a can of Coke, you have to show it to them maybe once or twice, and it’s very easy for them to be able to recognize it. Not so much with computers,” he said.

Beside unbelievable convenience, another main advantage of Amazon Go over regular grocery stores is the timeliness of restocking thanks to the real-time tracking of inventory, which takes up most of the human staffers’ time at the store, Puerini said.

Puerini said Amazon has no plan to expand the checkout-free technology to Whole Food stores, but suggested there will be more Amazon Go stores coming. 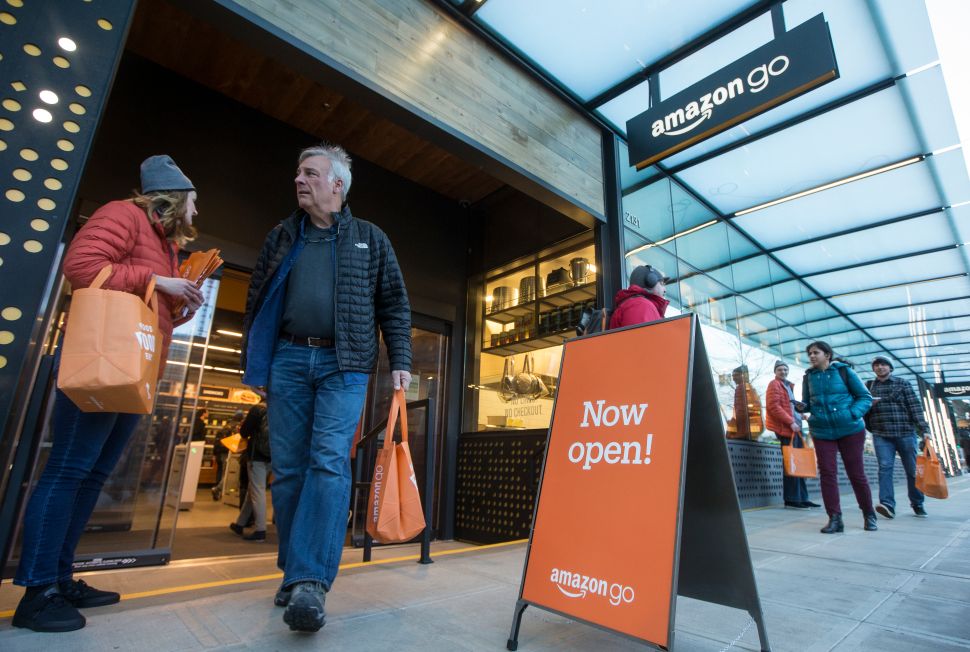