Actor, bodybuilder and former California governor Arnold Schwarzenegger plans to take oil companies to court over their dangerous tactics. He announced the lawsuit this week during a live recording of POLITICO’s Off Message podcast at SXSW.

Schwarzenegger said he’s in talks with several private law firms and preparing a public push around the effort. He still doesn’t know when he’ll officially file the suit but hopes it can coincide with a major environmental conference he’s hosting in Vienna in May.

According to Schwarzenegger, the tactics that fossil fuel makers use to justify their actions are no different from the way tobacco companies defended cigarette smoking (at least until they were taken to court).

“We’re going to be in there like an Alabama tick,” he said. “It’s absolutely irresponsible to know that your product is killing people and not have a warning label on it, like tobacco.”

Schwarzenegger wants every product that contains fossil fuels (including cars and gas pumps) to carry a warning label about their dangers. He said this would raise awareness about fossil fuels and encourage people to look to alternative fuels and clean cars.

“If you walk into a room and you know you’re going to kill someone, it’s first-degree murder,” Schwarzenegger said. “I think it’s the same thing with the oil companies.”

Indeed, a study last year concluded that ExxonMobil misled the public by suppressing the findings of its own scientists about fossil fuels’ effects on the environment.

Schwarzenegger is a Republican and acknowledged that his stance on the environment was at odds with President Donald Trump’s.

Schwarzenegger joins a growing list of activists who want to take legal action against climate change.

In January, New York City Mayor Bill de Blasio sued BP, Chevron, ConocoPhillips, Exxon Mobil and Royal Dutch Shell for the billions of dollars he anticipates the city will have to spend to protect New Yorkers from climate change. The city wants compensation for damages that the city has already experienced, as well as for damage the city will sustain through 2100.

Children in both the United States and Portugal have also sued their countries’ governments over their inaction on climate change.

At SXSW, Schwarzenegger also addressed allegations that he had groped and otherwise behaved inappropriately with female staffers on his 2003 gubernatorial campaign. It was his first public comment since the beginning of the #MeToo movement.

“I have to apologize,” Schwarzenegger said. “We make mistakes, and we don’t take it seriously. And then when you really think about it, you say, ‘Maybe I went too far.'”

Not all of the interview was serious: the one-time Hollywood heavyweight also talked about rebooting his movie career with the film Triplets, a Twins sequel costarring Danny DeVito and Eddie Murphy.

“There’s something funny there with the mixing of the sperm,” Schwarzenegger said.

The star also joked that Trump would play a role in the Terminator sequel due out next year.

“The T-800 model that I play, he’s traveling back in time to 2019 to get Trump out of prison,” Schwarzenegger said. 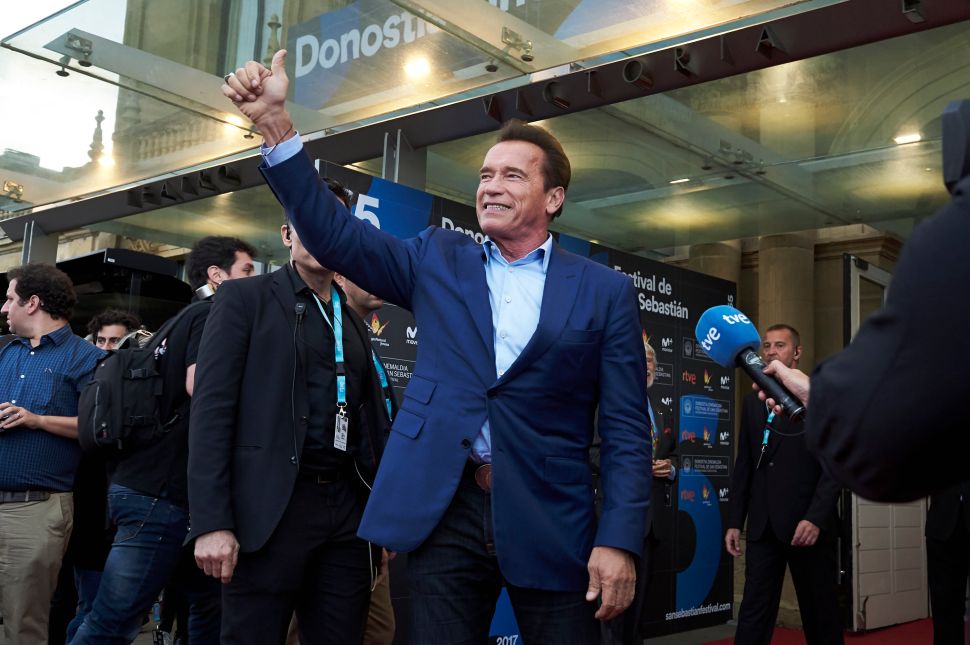