Bad weather didn’t keep collectors away from the 2018 Armory Show, which closed March 11 after strong attendance over its five-day run. The fair’s overall sales gave no indication that the event opened just as the second nor’easter hit New England in under a week, canceling and delaying flights from inbound visitors across the world. One buyer, Thomas Yamamoto, even hopped a flight from Shanghai to New York early to peep a painting in person that he’d bought after seeing just a photo of it. The work in question is a fetching white monochrome from 2011 by Mary Corse, a foundational figure in the male-dominated Light and Space movement started in 1960s Los Angeles. And Corse wasn’t the only overlooked lady from the mid 20th century getting snapped up at the show.

“Interest in female artists from the ’60s, ’70s and even the ’80s is high right now,” London-based gallerist Alison Jacques told Observer. Indeed, her Armory Show booth boasted a number of powerhouse women, including works by Ana Mendieta, Dorothea Tanning, Betty Parsons, Michelle Stuart and Sheila Hicks. Hicks studied at Yale, where she worked with legendary modernist Josef Albers and was a pioneer of textile art in the 1960s; now 83, the Nebraska-born, Paris-based artist is finally the subject of a major solo exhibition, at Paris’s Centre Pompidou. When the exhibition was first announced over a year ago, Jacques said she received a lot more inquiries about Hicks’s work, “which is typical when any artist gets a big solo show,” she explained.

Collector interest remained high through the Armory Show, though, with one of Hicks’s large linen panel work, Seeing and Thinking Out Loud #1, selling almost immediately during the VIP preview to a private collector for $165,000. Jacques also noted that she had sold several of the artist’s sculptural textile “memory balls,” which range in price from $38,000 to $45,000, and had placed another of the artist’s works with a Swiss museum.

There may be an overarching sense of urgency among collectors to purchase works by female artists whose long-standing careers are only just being revisited. Much of the refocussed attention could be due to the recent trend toward gender parity in art institutions after centuries of skewing male-heavy. Artists like Hicks and Stuart, the latter an American artist who began creating environmental earth-based and minimalist works in the 1970s—and a recent addition to Jacques’s roster—are “getting up there in age, leaving less time to talk to them first hand about the scope of their practices,” Jacques said, which is key to putting them on par on the marketplace and in history with their male peers.

Stuart’s work has only started to gain more traction, especially with Dia: Beacon placing her Sayreville Strata Quartet scroll works from 1976 on long-term view just last year, and Jacques added that her presentation of some of the artist’s works on paper—which dialogue with photographs by Ana Mendieta, who already has a strong institutional presence—had garnered a lot of interest. Likewise, her booth display of a $70,000 painting by famed New York gallerist Betty Parsons spurred talks with an unnamed museum about a major show. Parsons was known for supporting major male artists like Jackson Pollock, Clyfford Still and Mark Rothko, “leaving her own consistent painting practice overlooked for decades,” Jacques said. “It’s exciting to see that shifting.”

In the case of Corse, the 71-year-old Los Angeles-based artist is having a big museum moment, spurring collectors like Yamamoto to act fast. The Whitney Museum of American Art will present the first museum survey of her work in June, just a month after Dia:Beacon opens a gallery dedicated to her and featuring four newly acquired paintings. In a report by Bloomberg, Yamamoto said he and his wife feared the $350,000 monochrome by Corse that they purchased from L.A. gallery Kayne Griffin Corocoran’s Armory Show offerings “would go away” if he didn’t purchase it immediately, noting that “Normally, we’d put it on reserve, come here, see it and then buy it.”

Yayoi Kusama is perhaps the best example of an established but underrecognized female artist storming both the market and museums. While her Infinity Mirrors exhibition tours institutions around the globe, her iconic polka-dot or pumpkin works are popping up at nearly ever art fair. At last year’s Armory Show, Kusama’s large scale installation of polka dot blobs, Guidepost to the New World (2016), dominated the fair’s “town square” area, which is perhaps why this year her most recognizable works were conspicuously absent—dealers may have been worried about fatiguing an already oversaturated market.

Philadelphia’s Locks Gallery had a lesser known Kusama in tow, though, a small mixed media sculpture of flowers in a vase awash in pink and glitter from 1983. Presented alongside a 1966 work on paper by Agnes Martin and a sparkling, shiny wall-mounted sculpture by Lynda Benglis from 1978, with old and new works by Jennifer Bartlett in close proximity, the booth was a veritable treasure trove of works by female artists. Locks has foregrounded women artists for the last 25 years, according to gallery representative Doug Schaller, and he said sales were “going well” at Armory this year, although he hoped that investing in work by women was more than just a fashionable trend given the social climate.

Indeed, it’s tough to track the market for established female artists of the 20th century—especially those working today—since works by their male counterparts still routinely fetch higher prices and fair sales reports tend to focus on the biggest sum totals. Although by no means comprehensive, Artnet News’s summary of the 2018 Armory Show’s most triumphant sales had just six female artists listed among 41 male names.

Among them, however, was Tara Donovan whose installation of thousands of plastic tubes at the center of the fair replaced Kusama’s dotted blobs from last year; her gallery, Pace, reported selling out of her Composition Card works in their booth during the VIP preview. Additionally, Laure Prouvost’s highly Instagrammed painting at Lisson Gallery sold for $36,900. Depicting two large tits with the words “We Are Coming Out” in tidy text beneath them, hopefully it will prove a predictive adage as female artists continue to make market strides. 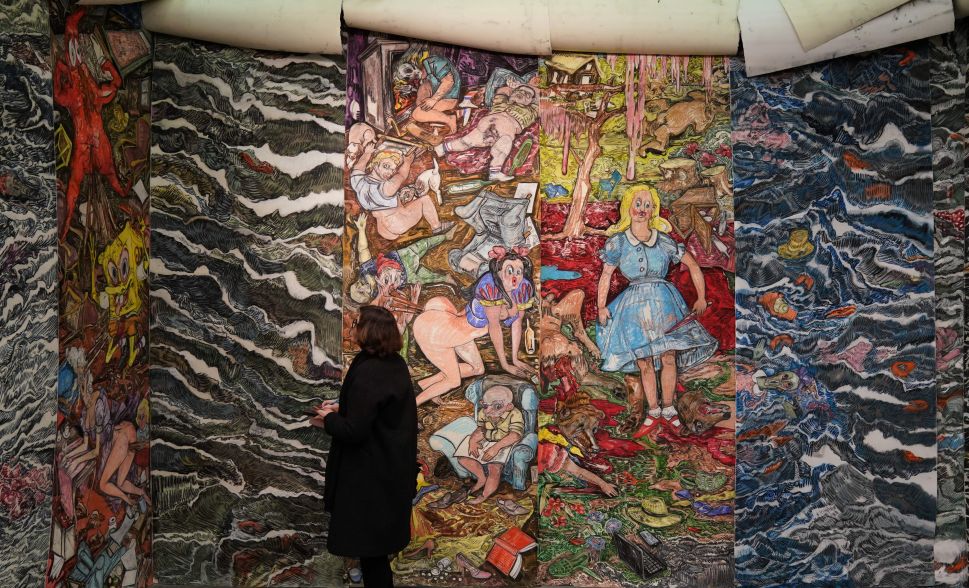