Living, as we do, in an era when everything is deemed “yuge,” it’s only natural to question the value of bigness—and there are several artists doing just that, especially when it comes to painting. Small paintings were once reserved for “lesser” subjects or denigrated as too commodifiable since their diminutive scale made them more accessible to the average consumer. But for many contemporary painters, a small canvas offers something often lacking in an age of immersive installations and Instagram-inducing shareable spectacles: intimacy.

“I tried painting large during my 20s and it didn’t feel right,” Paul Inglis said. The 55-year-old Boston-based artist told Observer that he’s “a quiet person to begin with, who doesn’t really have the desire or feel the need to go big and bold.” It’s perhaps this sense of performative extroversion that has made big paintings such a big hit in recent years, especially with the onset of the digital age in which everything became participatory through the power of social media. In 1999, New Yorker art critic Peter Schjeldahl coined the term “festival art” to describe the large, loud painting trend that filled booths as an increasing number of international art fairs vyed for press and patron attention. This sort of “festivalism” has only been exacerbated by the rise of video and installation art, which has spurred many of today’s painters to incorporate mixed media installations into their practice, making their work less about paint on a canvas, and more about an environmental aesthetic.

But Inglis’s small, bright and geometric land, sea and cityscapes, which are featured in his second solo show with Turn Gallery opening March 2, are far from shrinking violets. Rich in detail and saturated with color, each are contained in their own custom-built white frames that make them seem like they’ve become one with the wall. The effect is to invite viewers to lean into the work. “I wanted to give them permission to look close,” Inglis said. “In zeroing in, the viewer may experience a moment they might have missed if it were larger scale.”

Yet the history of Western art is one big “hell yes” to the question “is bigger better?” According to the European academic tradition codified by the French in the late 18th century, painting on a grand scale reflected cultural influence and power, not only for who or what being depicted in the painting, but also for the artists crafting the painting. Still life and genre scenes were ranked the least important, while historical and biblical moments and portraiture were valued most, with landscapes falling in an average sized middle ground. Academically trained artists—by and large white males, since the schools rarely accepted women or artists of color at the time—had to reach a certain level of technical skill before they were allowed to make large-scale paintings. Once they did, canvas size factored into who was better hung—literally. The bigger the painting, the better it could be seen on salon exhibition walls, which were usually crowded with paintings from floor to ceiling.

Even the most avant garde, anti-academic of painters used scale to measure their prowess. One has only to look at Monet’s Lilies spanning the entirety of a single gallery in New York’s Museum of Modern Art to see that he wanted landscape painting to be more than just an accolade of averageness. Abstract Expressionists followed suit—Jackson Pollock’s drip paintings and Mark Rothko’s color fields were about the performance of painting and the artist’s control over the viewer in their ability to evoke a dramatic response.

Indeed, when Betty Tompkins started painting in the 1960s, big was the name of the game. “To work large was to make a statement of strength and power,” she told Observer. “It was, after all, when Abstract Expressionism and Pop were major movements, which were both very male and large.” The 72-year-old artist, now renowned for her feminist paintings that range from 10 by 6 feet down to four inches square, saw scale as a tool to furthering equality. When she started making her large black-and-white “Fuck Paintings,” depicting close-up scenes of sexual penetration (as seen in her acclaimed P.P.O.W. show in New York last spring) she made them as big as she could. “Our transportation at the time was a Ford Econoline van. The largest painting I could fit into it on a diagonal was 84 by 60 inches so that determined the size of the early ones. I never considered working smaller.”

But when Tompkins began making her text-based series called “WOMEN Words” featuring terms commonly associated with females—like “bitch,” “slut,” “ice queen” and “easy lay”—in 2003, she turned toward tiny, deploying intimacy through scale rather than through subject matter as she had in her “Fuck Paintings.” In her 2016 FLAG Art Foundation show, “WOMEN Words, Phrases, and Stories” she debuted roughly 1,000 of the small canvases, the backgrounds of which were painted in an array of styles often coyly parodying prominent male painters. The show was met with accolades, and prompted a resurgence in interest in her work after years of operating off the radar. “I didn’t think I could do anything solid at four inches, so that was a big surprise to see that these works also held a lot power.”

The power of small subversions is key according to Fabiola Alondra of New York’s Fortnight Institute, especially within a society bombarded falsified news and buoyed by media spectacle these days. “I think small-scale work can function as a subtle political act, especially while we live under a regime of an ostentatious brute who equates greatness with bigness,” she said. To that end, the gallery has taken a special interest in small-scale works and Alondra and her co-founder, Jane Harmon, have found a sizable market for them, after the duo sold out their critically acclaimed show of Peter Shear’s small paintings last year. In February, they closed Alberto Casais’s solo exhibition of cityscape paintings in just three sizes, all under 11 by 14 inches. And their exhibition of New Mexico–based artist Ewelina Bochenska opening March 1 continues the growing trend for tiny work.

“The smallest painting I have ever made was two by one inches,” Bochenska told Observer. The surfaces of the Polish-born, New Mexico-based artist’s small canvases are layered and sculpted with paint into abstract symbols that border on mystical. The artist speaks of paintings as totemic objects, almost like amulets. “I especially like a painting of a size where you can hold it in the palm of your hand,” she said. “It’s like a secret object that you can take with you anywhere, keep it in your pocket, and be with it in most ordinary places.”

Bochenska works on large canvases as well, but “bigger is definitely not better, it is just very different,” she said, explaining that large canvases become a part of your environment, forcing you to participate externally, while small paintings take you more inward, recentering power in oneself. “I love doing both, they feed off of each other and inform each other.” But the artist said it’s the balance that’s key. “You don’t always have to be the loudest to be heard.” 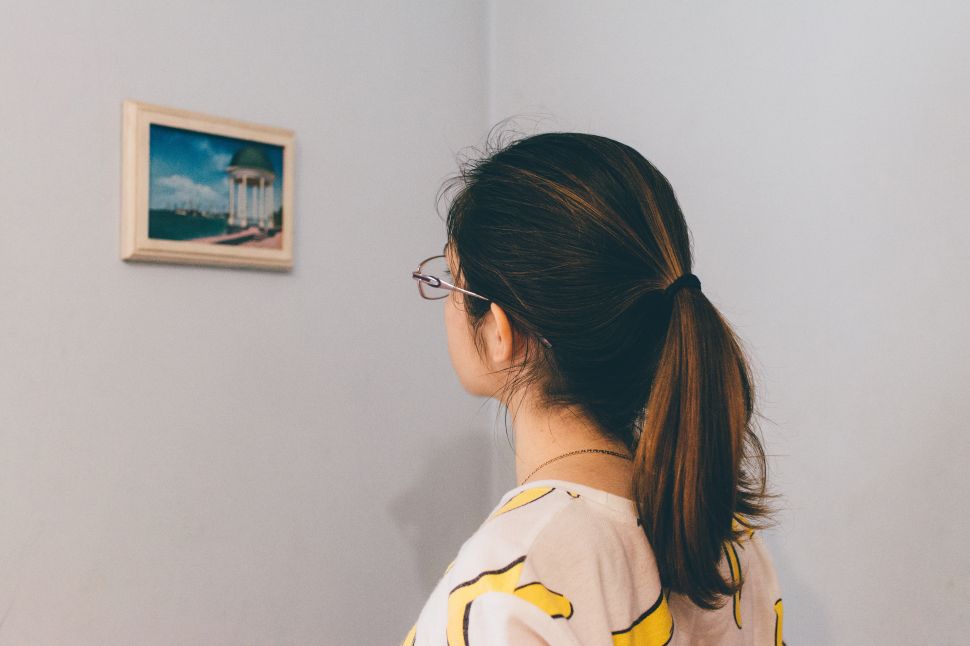