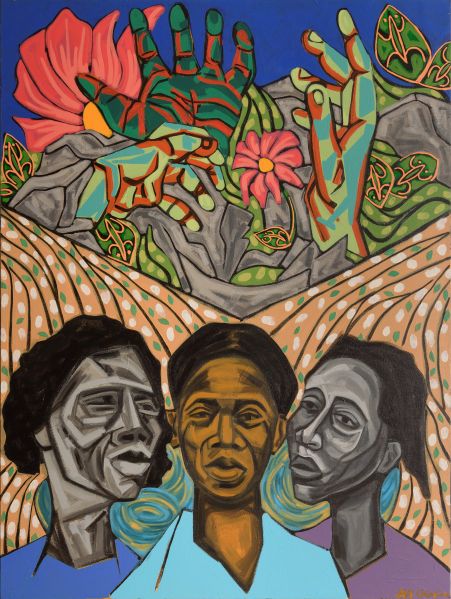 A lot of New Yorkers only ever find themselves at the end of the J or E train line if they need to get to JFK airport, but the inaugural Southeast Queens Biennial offers one more incentive to board a Jamaica-bound train, and it might be just as revelatory as taking a trip abroad. The exhibition features the work of 18 artists who—although vastly separated by age, ethnicity and artistic practice—all live and work in Southeast Queens. Spread across two venues, York College Fine Arts Gallery and the main branch of the Queens Library, the show explores how New York City’s most diverse borough makes it perhaps the best place in the city for an artist to live and work…if lacking only in local spaces to exhibit.

Margaret Rose Vendryes, the chair of Performing and Fine Arts at York College, said the idea for a biennial came out of a Queens Council of the Arts peer group discussion. “One of the things we spoke about at length was our inability to share the rich cultural and artistic exchange what we have within our own community,” she told Observer, explaining that York’s fine art gallery is only one of only two spaces in Southeast Queens for artists to show work. 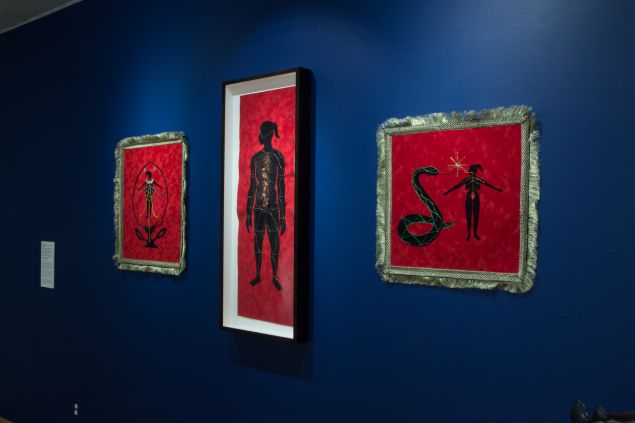 Three works by Shervone Neckles made from velvet and embroidery thread. Nicholas Fraser

But beyond a dearth of venues in which local artists can exhibit, the lack of art outlets in the area inhibits the community from seeing itself reflected in the city’s renowned cultural offerings. While New York may have a surplus of museums and galleries, most of them are located in Manhattan or Brooklyn, often making them inaccessible to outer borough residents, the majority of whom are part of minority populations. Indeed, a 2010 study by the American Alliance of Museums estimated that people of color would make up 46 percent of the country’s population by 2033, yet, by that time, would still represent only nine percent of museums’ core visitors.

The biennial, titled “A Locus of Moving Points” seeks to underscore the diversity of the population in Southeast Queens, defined as everything east of Union Turnpike and south of Queens Boulevard. “We wanted the Queens community—not just the artists—to see themselves in this show,” said Anastasia Tuazon, one of six curators who helped organize the show as part of the Curatorial Lab at No Longer Empty, a small nonprofit that organizes site and community responsive exhibitions and educational programs. 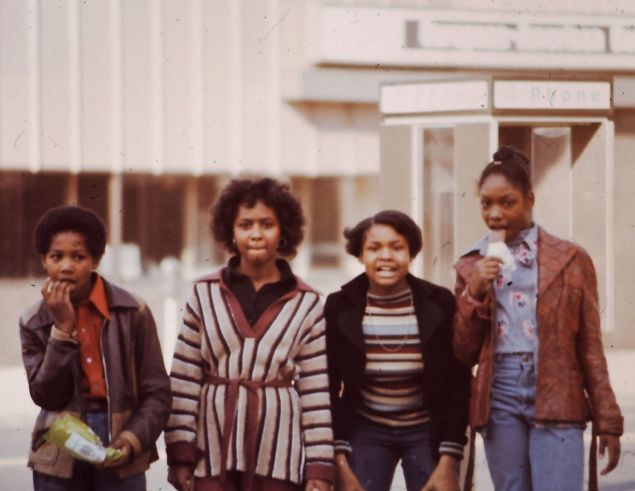 The works on view speak to the history of place and immigrant identity, gender and race, and environmental concerns from artists of all ages. Sana Musasama, who was born and still lives and works in the St. Albans neighborhood, explores the little known social history of the Maple Sugar Movement—an 18th-century anti-slavery campaign to decrease sugar consumption by replacing it with maple syrup—in her installations from the 1990s, recreated at York College. Meanwhile Natali S Bravo-Barbee’s 2016 work, c. 1986, probes her own personal history and her relationship to her Argentinian Catholic parents through an installation of cyanotype prints of lace collars paired with a mannequin of young girl dressed in her Sunday best casting a larger-than-life shadow across them. At the Queens Library, an installation of photos by Salimah Ali, Corona Johnson, Lisa Wade and Renee Harper depict family and neighbors in and around Queens. 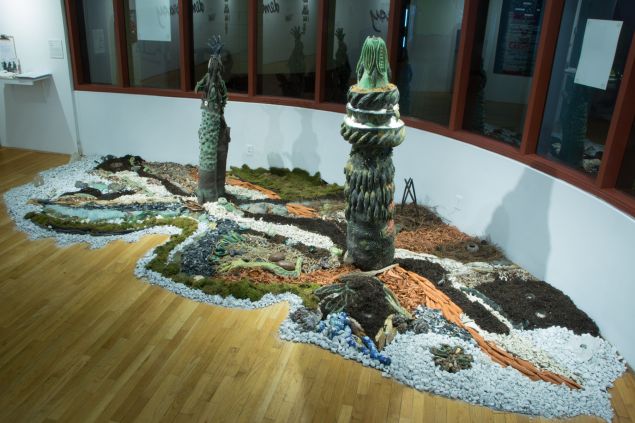 “Seeing the community that I see every day being presented as art—that is incredibly powerful and it’s an honor to be able to provide a space for that,” said chief librarian and Queens native Nick Buron in advance of the library’s official opening of the show on Saturday March 17. “This is the result of organizations being open to partnerships that are right outside their door, and we need more of that.”

Alongside the exhibition, the curatorial team has also instituted several projects and programs to support local artists. York College faculty will be guided through classes on social media promotion and how to use art as a tool for political and social mobilization, while the public can take advantage of workshops with some of the biennial’s participating artists on topics like how to upcycle (with Okechukwu Okegrass Ofiaeli) and choreography as an expression of female empowerment. 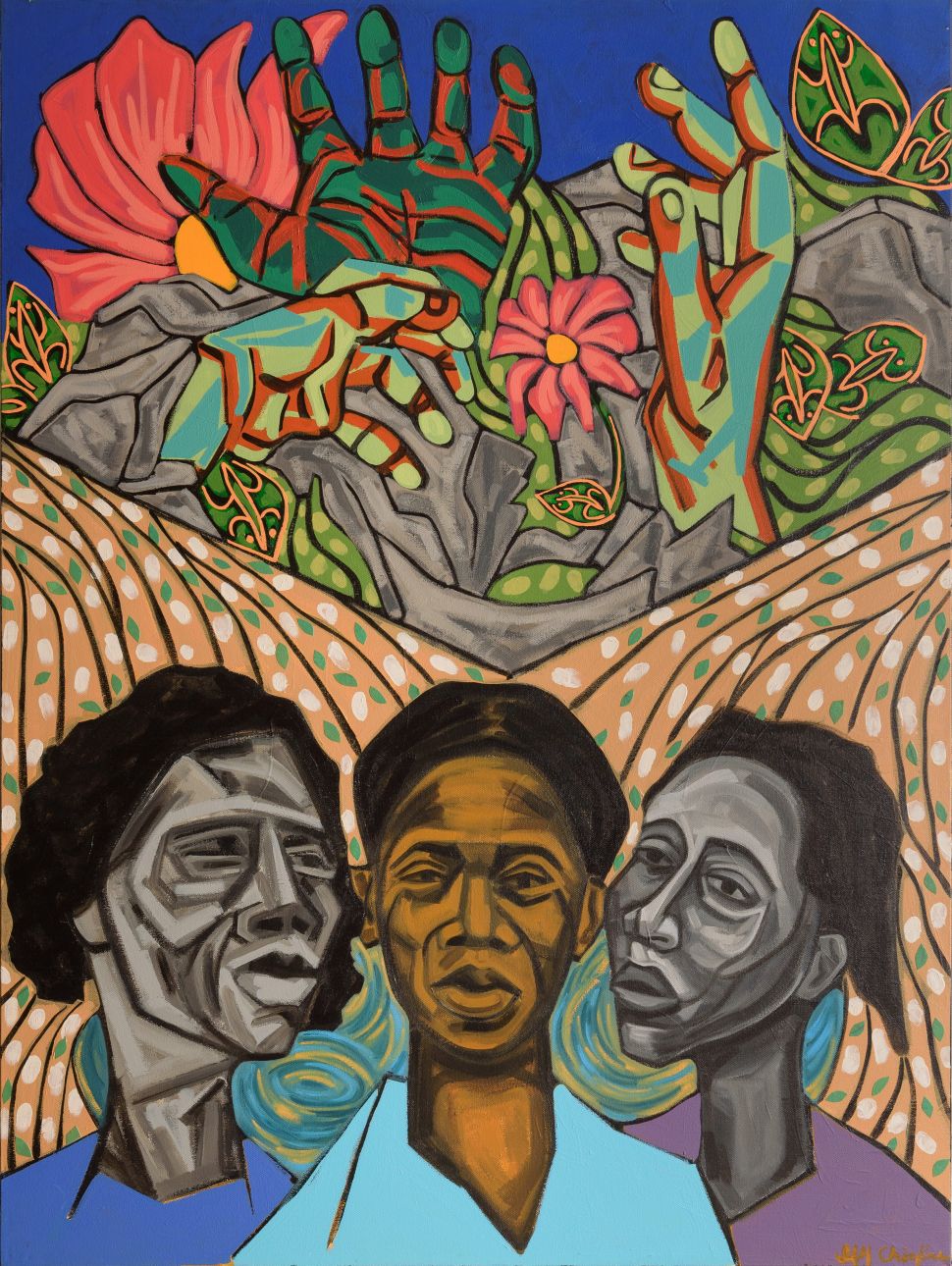