The annual South by Southwest festival and conference held in Austin, Texas has revealed a surprising undercurrent to 2018’s programming: this year, more than ever, it acts as a crucial facet to promote the aerospace industry.

“Aerospace is usually a very secretive, closed-door industry,” said Cory Williamson of Firefly Aerospace, a company that makes light satellite launch vehicles based just outside of Austin. At SXSW they blow that open. “[Usually] you don’t get to see the hardware up close, so this is how we can show people what rocket parts look like, and how they work,” he said, giving attendees the rare opportunity to satisfy the curiosity of that wannabe astronaut who lives in all of us.

SXSW isn’t just a music, film, and media festival. For companies hoping to grow their brand, for startups seeking to tell an interesting story and for entrepreneurs looking to build their businesses, SXSW’s thousands of attendees can be the perfect way to build the right relationship to accelerate progress.

A breeding ground for new ideas and partnerships, this year the festival has provided a huge platform for the space industry to drive conversation about innovations and gain exposure to potential financial backers who might not normally have a direct pathway into space-related projects

“We want to stimulate interest among companies or individuals that are not traditionally in space, and let them know that there is boundless opportunity here,” Aaron Sorenson, Global Communications Officer of ispace told Observer. His company is trying to figure out how best to use the resources found on the moon. “We also want to learn, we want to get inspired, and to find creative ways to collaborate with other companies. To get ideas from them on what we should be doing, what we could be doing together and how we could help each other. It doesn’t always have to be a financial relationship.”

What began as a small music festival nearly 32 years ago is an entirely different beast these days. The sprawling event takes over several entire city blocks in Austin, giving insight into emerging technology across all the industries it now serves. Many treat it as a crystal ball for the year’s business, media and marketing trends. With a growing platform for aerospace, companies like Firefly Aerospace are finding it to be the perfect high-traffic event to help spread awareness to their new company. One of the main reasons we are at SXSW is to raise awareness that there is a new space company on the rise here in Austin, to let people know who we are, and that we are making small rockets to deliver small payloads to orbit,” said Williamson.

But the big names benefit, too. Aerospace giant, Lockheed Martin established a large presence at SXSW this year with multiple virtual and augmented reality headsets granting trips to different locations in space. Lockheed is known to be a leader in the industry, and is actively scouting for new technologies and approaches from fellow attendees that they can integrate into their business model. SXSW helps them market their presence and products, but it also helps them to keep fresh and current with the times. At last year’s event, Lockheed held a Helopitch where selected entrepreneurs were invited to pitch their ideas to aerospace executives and venture capitalists during a 10 minute helicopter flight around Austin’s upper reaches.

“We’re here looking for whatever can give us an edge,” said Guy Chriqui, Senior Research Engineer at Lockheed Martin. There’s a huge venture capital arm that comes to Lockheed Martin Ventures that has $200 million dollars, and are looking to invest in startup companies. I’m here trying to absorb what’s fresh in the industry, and what we can assimilate into ours. South by Southwest is ideal for that.”

NASA uses the event to provide updates on their most out-of-the-box initiatives. This year, they hosted talks about what they are doing to search for extraterrestrial life, how and why they collaborate with Lego and the question on everyone’s minds: when we should all expect to be living on Mars.

And of course SpaceX has a presence. In an unprogrammed surprise, SpaceX’s founder Elon Musk joined the cast of HBO’s hit series Westworld on a panel, discussing in front of a crowd of thousands SpaceX’s recent Falcon Heavy launch as well as the vision for his company.

Westworld’s directors, Jonathan Nolan and Lisa Joy, worked alongside Musk during the launch of his newest rocket to create a small recap video which they debuted in the panel. By blending the entertainment and space industry, they were able to achieve an intimate cross-over of brands: Nolan providing professional videography and Hollywood networking, with Musk supplying the big rocket with a Tesla inside as the unique focal point.

Inside Austin’s Convention center, thousands of visitors make their way by hundreds of trade show vendors, and companies looking to promote their brands. Aerospace companies big and small lined the event with their unique approaches, hoping to use SXSW as a way to swing into a successful 2018. 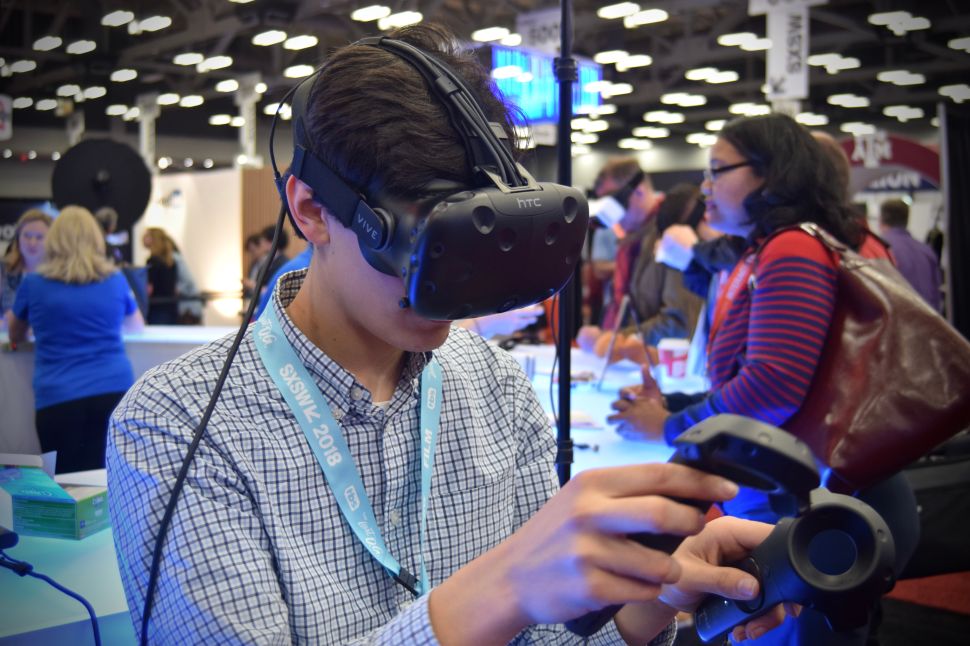