It’s almost time for South by Southwest, when the worlds of music, film, tech, media and more combine for 10 days in Austin, Texas.

SXSW has evolved since it first launched in 1987, and now includes an increasingly vast assortment of activities. The 2018 lineup includes a Spike Lee masterclass, conversations with Ethan Hawke and Alex Rodriguez, in addition to the debut of a scary film directed by John Krasinski and musical sets by Khalid, DMC and Sylvan Esso.

Austin, too, has experienced a rise in popularity, with ever-growing numbers of people flocking to the city for its growing music, arts and cultural scene. Luckily, the city has plenty of chic hotel accommodations for those heading to the SXSW events this year. Below, see our top five choices for where to stay in Austin for South by Southwest.

The Hotel Van Zandt opened in November 2015 and is Kimpton’s first hotel in Austin. It’s composed of 319 rooms, including 41 suites, all of which have been designed by Mark Zeff with unique Texas-oriented accents and antiques. The rooms are bedecked in dark wood and bronze, and bathrooms contain Atelier Bloem amenities. The hotel’s pool is on the fourth-floor deck, with cabanas and views of the lake and downtown Austin. Head to the pool area after the sun goes down, sit by the fire and gaze at the stars.

The W Hotel in Austin is made up of 251 rooms and is situated next to the Austin City Limits music venue. The hotel opened in December 2010, and its lounge area, known as the Living Room is divided into four distinct spaces, including the Records Room, where you can sip a handcrafted cocktail by the fireplace, while checking out the 8,000 vinyl records hung on the walls. The adjacent Secret Bar contains a vintage McIntosh stereo, where records can actually be played. The hotel also houses the AWAY spa, FIT gym and of course, the WET pool on the fourth floor, which has live music and cabanas that can be reserved.

The historic Hotel Ella occupies a Greek Revival-style mansion originally built in 1900, first known as Goodall Wooten House. It opened as a 47-room boutique hotel after an extensive renovation in 2013, with a pool, cabanas and a restaurant. The rooms are outfitted with plush upholstered furniture, patterned carpets and warm earth tones. A wraparound veranda overlooks the sprawling lawns of the property, which gets its name from Wooten’s wife, Ella Newsome, who was behind the transformation of the building that is now the hotel—Newsome was known for her impeccable taste and enlisted Neiman Marcus to redecorate the entire house in 1925. While the hotel has changed just a bit since then, it’s just as stylish and chic as one would expect—it’s also on the National Register of Historic Places.

The luxurious Four Seasons in Austin first opened its doors in 1986 but underwent a total renovation that was completed in December 2017, during which every single one of the 294 rooms, including 33 suites, were entirely redesigned. Each of the rooms in the nine-story hotel has views of the lake or Austin skyline, and are decorated in a blue and grey color palette, with wood and metallic accents. The heated outdoor salter pool is open year-round, and there’s also a newly renovated 4,000-square-foot spa and fitness center, with three treatment rooms.

If you’re traveling with a large party, the JW Marriott Austin might be the best fit. It’s the largest hotel in Austin and happens to be the biggest JW Marriott in the United States. The 34-story hotel opened in February 2015, and aside from the 982 guest rooms, there are also three presidential suites, three hospitality suites and 24 executive suites. The interior is inspired by local artisans, music and culture, with mostly contemporary furniture and eclectic pieces mixed in. The lobby’s columns are built from Texas limestone, and the ceiling features a topographical map of Austin. The hotel has seven bars and three restaurants, plus a pool on the fifth floor, which happens to have the state’s outline etched at the bottom of it.

Click here for your guide to eating and drinking in Austin. 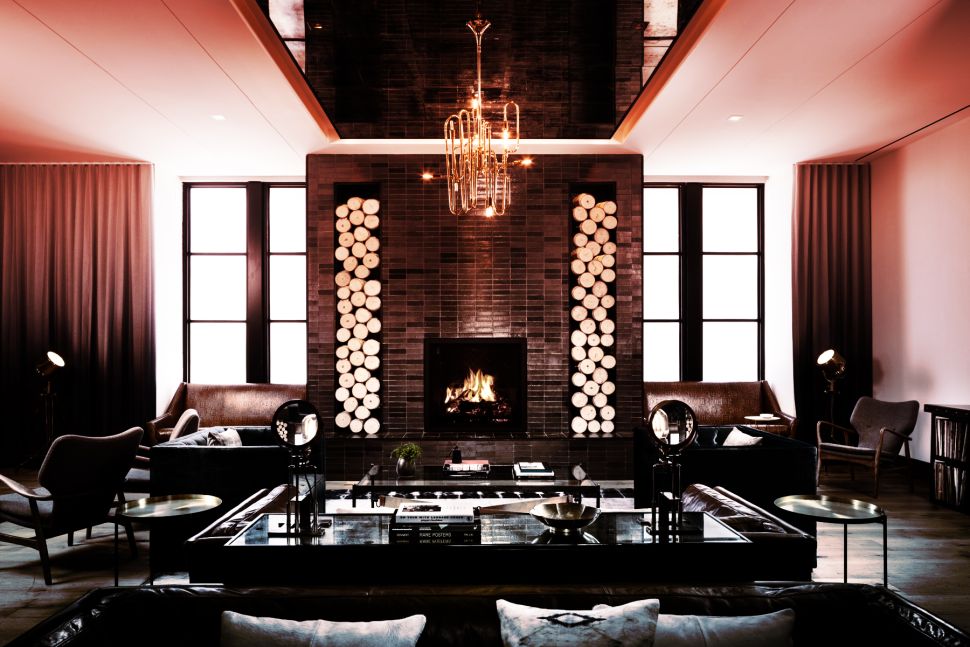