“Before I started this, like so many people, I wondered why the hell would you say ‘I love you,’ after four and a half seconds,” said Amy Kaufman, the world’s foremost Bachelor expert. “But after talking to all these people I had a sense of it.”

The Los Angeles Times entertainment writer recapped the show from 2010 to 2014, until she was notoriously banned from covering the franchise after exposing Elan Gale, a top producer, for his manipulative tactics behind-the-scenes. Now, she’s back on the Bach beat with Bachelor Nation: Inside the World of America’s Favorite Guilty Pleasure, a deep dive into the show that’s become a cultural juggernaut. The book is full of shocking revelations and accusations, from shady production techniques to exploring why feminists can’t get enough of reality TV’s longest-running romance.

Kaufman called the Observer offices to discuss how The Bachelor has changed since its 2002 premiere, the producers unequal relationship with contestants and the reality behind UnREAL.

Alex Michel, America’s first Bachelor, “wanted to get into film and television and media.” What were the early contestants looking for—if not lucrative SugarBearHair and other #SponCon deals?

They said Alex Michel was going to go on Survivor, so clearly he was interested, which is fascinating given that he’s now MIA, won’t talk to anyone and doesn’t want any sort of attention. He must’ve learned some sort of lesson from that. I would’ve loved to talk to him. He was my white whale, but alas, I couldn’t convince him.

No one knew how being on a reality show would affect their reputation. They said it was really hard to cast those first few seasons. Then, after people saw that this was a path to fame, it completely changed the entire game. Now they have the opposite problem, they’re going to bars and who knows where, sports games, to try to find someone who’s the rare person, who doesn’t have ulterior motives to go on the show. That’s their biggest hurdle.

It’s almost impossible now to find someone who’s not doing it for the Instagram reasons.

More people go on for fame than for money, but the majority are somewhere in between. Sean Lowe says in the book that if you go on just wanting to find your husband, that’s crazy too. Who goes, ‘OkCupid or The Bachelor?’ Most people think, ‘It should be a fun adventure. Maybe I’ll meet a dude and if not I’ll definitely get 50,000 Instagram followers, so what the hell.’

You’re able to pinpoint The Bachelor’s eerie similarities to UnREAL, despite the show’s creator refusing to be interviewed for your book. I didn’t realize the relationship between Mike Fleiss and Lisa Levenson mirrored Quinn and Chet’s dynamic. What similarities surprised you?

We can never prove it, but the biographical details really did seem to line up there. The early days of The Bachelor seem like a far cry from how it is now. It was sort of the wild, wild west. Not only were they figuring out how the show would work and figuring out if they should give out roses or necklaces, but they also were partying it up. They were living large, in a way.

There was a lawsuit recently where a producer sued a bunch of fellow producers and a production company because she said there was so much sexual talk it made her uncomfortable. She claims when she brought it up to her higher-ups they fired her. It’s hard to differentiate what is a work environment on this show. The lines between what’s happening on the show and what’s happening as a producer are vague.

Considering the allegations from last season’s Paradise, do you think the producers and cast will be more mindful of consent, especially considering how they botched it last time?

It felt like the viewers had said, ‘Listen, we’re drawing a line, you guys have gone too far, this show is trash you need to not treat people this way.’ We’re a Winter Games and a Bachelor season deep and look how high the ratings got again, at the end of Arie’s season, because it was salacious. I’d hope they’d again be very clear about the lines and not show people getting incredibly wasted and making fools out of themselves. But that’s what Paradise is built on.

It was interesting that the producers would ask the contestants to take a shot with them to get them to talk. It showed they’ll never take alcohol out of the equation completely.

It’s such a lubricator of awkwardness. People don’t know how to talk about themselves, they’re trying to get comfortable on camera and I can totally see how a producer around your age makes it a relaxed environment. You don’t know where that’s going to lead. It’s a dangerous road.

Backing up a little bit, what did you really think about Winter Games?

I actually really liked Winter Games because it wasn’t so over the top, it wasn’t about partying and hooking up with a million people. A few people did hook up with more than one person, but it seemed like it was just making out. It was a little bit more chaste. They had some tongue-in-cheek moments but they kept the sincerity, and maybe that was a reflection of some sort of tonal shift.

It also felt more about consent, especially when they had the opportunity to go to the Fantasy Suites.

That totally was. They made it very clear and had the guys, even asshole Luke saying, ‘This is your choice and I respect you’ and ‘I don’t want to do anything too soon.’

Elan Gale, a producer on the show, seems to maintain very strong relationships with the cast members, even after he manipulates them on camera. How do you think does he does that?

It’s not just him, people are friends with a lot of producers from the show. How many Instagrams do you see of people who are at a producer’s baby shower or at a wedding? It’s so fascinating to me because I think it’s almost like a Stockholm syndrome thing. You don’t want to admit that you have been manipulated in any way. Who wants to think that their friend doesn’t care about them and is doing their job?

I do think the producers form relationships with these contestants, I’m not saying it’s completely fake, but it’s always going to be a compromised friendship because they have other intentions that are counter to yours. It’s a little bit of self-delusion, in a way. There are so many people who are so defensive of the producers. And I’m not out here to say every producer is some evil monster, I’m saying it’s not black and white. People should be aware of that.

Is it like UnREAL, where you’re produced by one person and then you form a strong relationship?

Generally, yeah, you are assigned to a producer. There are people who didn’t mesh with certain producers. I remember Sharleen saying there was one producer who couldn’t get any sound bites out of her so they swapped her to someone else.

Your watch parties are famous, especially since Chris Harrison stopped by for one. What did you learn from former contestants like Ashley I. and JJ Lane, when they came over to watch the show?

I really like when people come over because they’re always way better than you think. Ashley I.—who doesn’t think this girl’s psycho? She cries at the drop of a hat! Actually, she’s a really chill girl, I like her a lot. JJ, when he came, he was very un-villainous, I liked him. We’d be watching and during the commercials, someone would ask, ‘Did a producer make them do that?’ and they’d say ‘Oh, totally.’

What motivated the former contestants and producers to go on the record with you, especially after you were banned by the show?

Good question. People love to talk, right? I would say to everyone, I’m not asking you to say anything, if something is uncomfortable for you, don’t talk about it. I want to know about your experience on the show. Ashley talks more about her life after the show, some people talk about how they got out of their jobs to go on the show.

Do you think the way people view The Bachelor, as the guiltiest of pleasures, has changed over the years? The New York Times went from panning the show to covering your book and it’s become more a part of the cultural conversation than ever.

This morning I did NPR and the host was saying her producer had to convince her to do it. In her intro she said, ‘I’m sure a number of NPR listeners are diving across the room to change the channel.’ There’s definitely this attitude that if you’re smart you can’t watch The Bachelor but the majority of viewers are pretty well educated. It’s a weird mix of high/low. My publicist hasn’t had any author do NPR and InTouch on the same day.

Do you think the show has been destigmatized over the years?

People mock it, but all of these high-brow outlets are considering it in ways they didn’t used to, even if they still sort of look down their nose at it. I think they understand there are so many people that like it that it’s worthy of exploration, which is how I felt too. 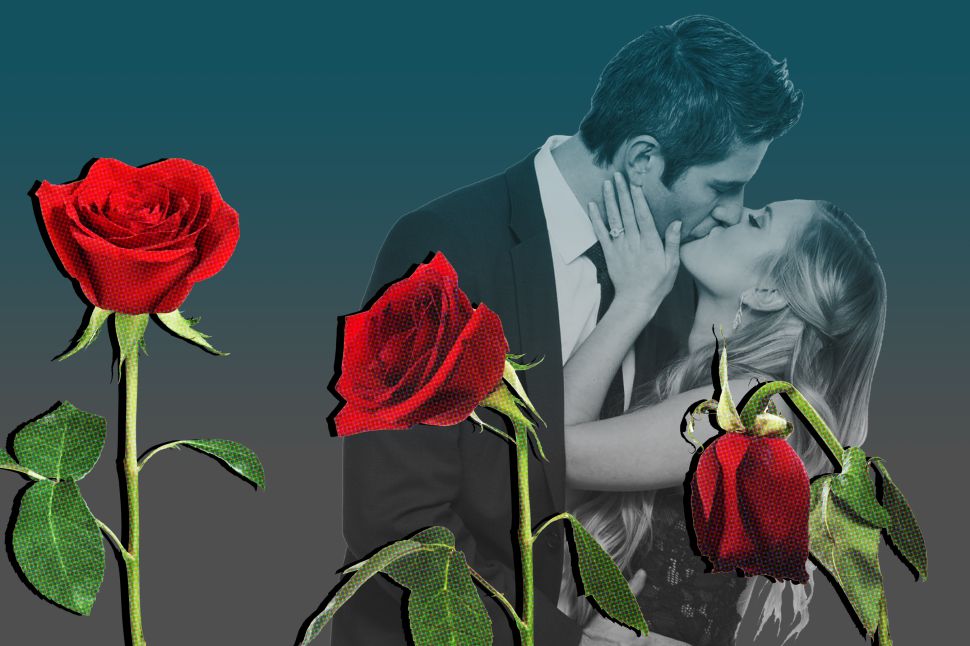