After winning most of the acting awards in existence, including two best actress Oscars, the great Glenda Jackson retired at the top of her form to join the British Parliament in 1992, restricting her high-voltage emoting to the impassioned speeches she delivered to the House of Commons and raising politics to new heights of distinction for 23 years. She is now back where she belongs for the first time in nearly three decades, starring in a Broadway revival of Edward Albee’s lacerating Three Tall Women, raising the craft of acting to new heights of achievement. She informs the stage with her inimitable voice and electrifying presence, and all is right with the world once more.

The three tall, exasperating women in the play are called, simply, A, B, and C. Usually staged in bleak, often blank spaces without sets and costumes, director Joe Mantello has chosen to frame the fiery trio in the beautiful bedroom of an elegant country house replete with French antiques and glamorous gowns. In the first of two scenes without intermission, the owner of the estate is A, a 92-year-old dowager who insists she is only 91. As played by the indomitable Glenda Jackson, she’s a noisy but fragile piece of work—a rich, arrogant racist, physically disabled with a broken arm in a sling and a mouth spouting torrents of anti-Semitism and homophobia, wiped out by life, clearly slipping into the restraints of senility but mean as an adder, still capable of inflicting insults on her two companions.

She is in good company. Laurie Metcalf is B, the middle-aged caregiver-nurse who indulges her indifferently, and Alison Pill is C, the attractive lawyer who has arrived from the bank to bring a semblance of order to the unsigned checks, unpaid bills, and mounting legal affairs A continually ignores. The scene, which unravels in a disjointed rant about curdled memories of everything from riding western saddle to Norma Shearer, proves to the viewer’s delight why Jackson has forgotten nothing about how to dominate the proscenium stage with power and persuasion, and ends when she collapses from a stroke. It appears that her volatile, raucous and disorderly life might be ending at last, but the play is far from over.

When the lights come up on the following scene (under Mantello’s fluid direction, the play now seems more like two continual scenes separated by a blackout than two acts divided by an interval) the three women appear as mirrored reflections of the same character, only 20 years younger. While A in her 90s lies comatose from the stroke that has left her paralyzed, A the septugenarian stalks her surroundings with renewed vigor and spirit. This is Glenda Jackson at her randiest and most verbose because she is elegantly gowned at 72 with a voice sharp as the blade of a guillotine, and gamely bitching her way through Edward Albee’s most inspired dialogue with the other tall women.

C is now a young mannequin with her whole life ahead of her who describes how she lost her virginity while A and B listen, but it soon becomes obvious that they’re three tall women who add up to the same tall woman. You realize how C turned into the hopelessly cynical B and B ended up as the mendacious A. C is the idealist who thinks she will never change, B is the middle-aged pragmatist and A is the jaded, experienced sum total of all three.

We see their visions of the husband they emasculated, the sister they emulated, the mother they hated, and the son they raised, resented, and rejected. They’re all figments of Albee’s imagination, but based on the mother he despised. But as the play progresses and the recollections blend, it’s also obvious that the three tall women are also Albee’s candid attempt to psychoanalyze himself. “I am here,” says A in one of the play’s most devastating scenes—“and I deny you all!”

In life, Albee’s adoptive mother dismissed his talent and acclaim, rejected him, and eventually disowned him because he was gay. Three Tall Women won the Pulitzer Prize as the playwright’s acrimonious, witty, no-holds-barred opportunity to get even. The characters who play three parts of the same woman are often credited with having the last word, but it is really Albee who writes the last epitaph. In the expert hands of three terrific actors assembled for this production, the viewpoints are thrillingly balanced, and director Mantello deconstructs the various aspects of the female gender and shows how they can either ensnare or liberate each other.

Of course, I keep returning to Glenda Jackson. She’s a generous and collaborative performer, knowing when to share the center spot and how to surrender it when necessary, but there is no escaping the fact that she rules this production like royalty.

From the rambling old harridan in the first scene to the implacable wretch in Scene Two, Glenda Jackson discovers and reveals every detail, every nuance of a creature who marbleized into a monster by being tough and strong when everyone else in her family was weak. Controlling her character’s thoughts and actions—not to mention the stage itself—while mostly seated in an armchair, she holds the audience captive with the wave of a finger. She can also be hilarious. At one point she relates a story of how her late husband once entered her dressing room stark naked with a diamond bracelet attached to his own erect family jewel, and the way she tells it reduces the audience to hysterics. Three Tall Women is the benchmark by which everything on Broadway will be measured this year. The word is “unforgettable.” 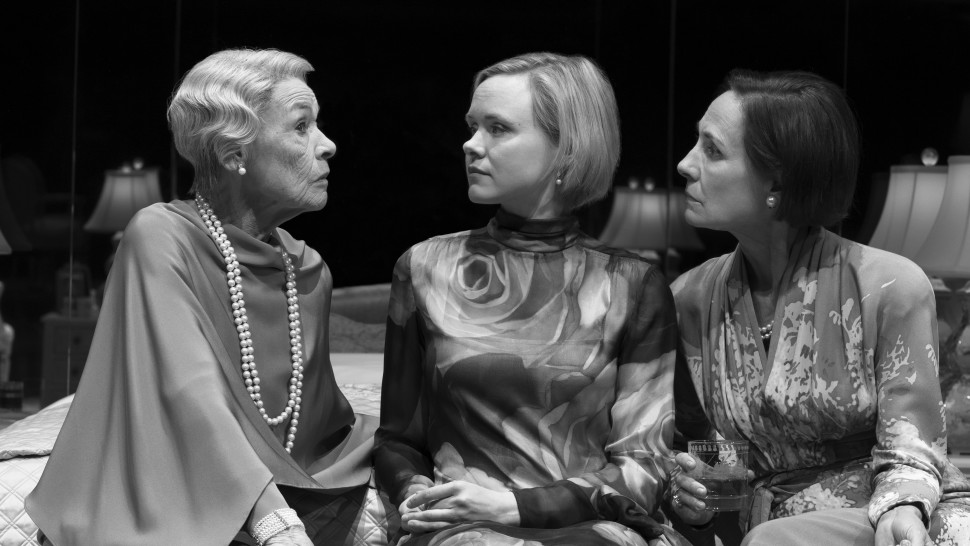