The days of imagining what the world would be like if there were a nuclear arms race in the Middle East are over. That nightmare has become a reality. The race is on—and only the United States can prevent it from turning deadly.

The outcome of the nuclear arms race in the Middle East hinges on the way in which the United States balances its influence over Saudi Arabia, given the kingdom’s need for parity with Iran.

The sands of time on the nuclear deal between Iran and the P5+1, signed in the spring of 2015, are quickly dwindling. The moment the deal ends, Iran is free to enrich and develop as much uranium and to build as many nuclear plants as it wishes. Iran is ready, willing and—despite sanctions, deals and promises—able to move ahead with its nuclear development the second the deal expires.

Meanwhile, the Saudis are pushing hard to get their own nuclear technology up and running. According to an editorial in The New York Times, there are “growing signs” that the Saudis want more than alternatives for fossil fuels.

The Iran nuclear deal is at the top of the Trump administration’s agenda. It is also top among Israeli Prime Minister Benjamin Netanyahu’s top priorities. Both Trump and Netanyahu agree there are only two alternatives for the deal: “Fix it or nix it,” as Netanyahu declared.

The fix would require recalibrating the time element of the deal—in essence extending it indefinitely to make certain that Iran is not permitted to enrich its own uranium and plutonium. If that was accomplished, it would remove pressure and reduce Saudi Arabia’s need to have more than what Iran has.

Nixing it means convincing the international community that the deal is a bad one and slapping sanctions back on Iran.

For Saudi Arabia, the nuclear arms race in the Middle East is not just about technology or neighborly competition. As with many conflicts in the region, it circles back to origins of Islam. If Iran has nuclear technology and Saudi Arabia does not, it would tip the scales in the Shiite-Sunni conflict.  In the eyes of Sunni Saudi Arabia, the custodian of the holy sites of Islam, Shiite Iran cannot be permitted to solely possess the ultimate weapon. If Iran has it, the Saudis must have it, too.

Iran and Saudi Arabia have been enemies since the generation after the Prophet Mohammed’s death. The Muslim world is divided into two major swaths: Sunnis compose about 85 percent of Muslims around the world and Shia composes the other 15 percent. Other sects are so small that they are only a blip in the equation. Shiites and Sunnis see the other as heretics that bastardize the true tradition. Each is committed to the other’s destruction.

This explains the theoretical side of the antagonism and resultant competition between Saudi Arabia and Iran.

There is also a practical side. In 2011, Saudi Arabia announced plans to build 16 reactors. The kingdom has since announced that there is a short list of bidders chomping at the bit to build its first set of nuclear reactors. The United States is on that short list.

The U.S. wants to be involved in Saudi Arabia’s nuclear plan in order to limit the nuclear race in the region. But also on the list are China, Russia, France and South Korea—all of whom have less of an interest in quelling regional tensions. In fact, one could argue that Russia and China might actually want to stimulate tensions in order to jumpstart their own nuclear and arms trades in the region.

Potential bidders are salivating over the potential Saudi nuclear project. U.S. Secretary of Energy Rick Perry even cancelled a trip to India and rerouted to London to meet with Saudi representatives during the first week of March.

The United States wants to make certain that if and when Saudi Arabia attains nuclear capabilities, they only have reactors and will need to import already enriched uranium. That precedent has already been set; it is the agreement the U.S. signed with the United Arab Emirates in 2009, and it is called a 123 Agreement.

Iran is as concerned about Saudi Arabia’s nuclear development as the Saudis are about Iran’s nuclear acquisitions. Iranian leadership is certainly not pleased about world powers flirting with and clamoring around their Sunni Saudi neighbors.

Sitting on the sidelines but certainly within the range of danger, Israel is particularly worried.

The potential for a nuclear misstep here is gargantuan. Nuclear weapons capabilities in the hands of governments motivated by centuries of hatred and that are sworn and implacable enemies is terrifying.

Tensions that have been building for years are coming to a head. In 1980, even the 13-year-old daughter of President Jimmy Carter realized the significance of what was happening. When asked about issues of concern, little Amy Carter said she was most concerned about nuclear weapons.

Out of the mouths of babes. 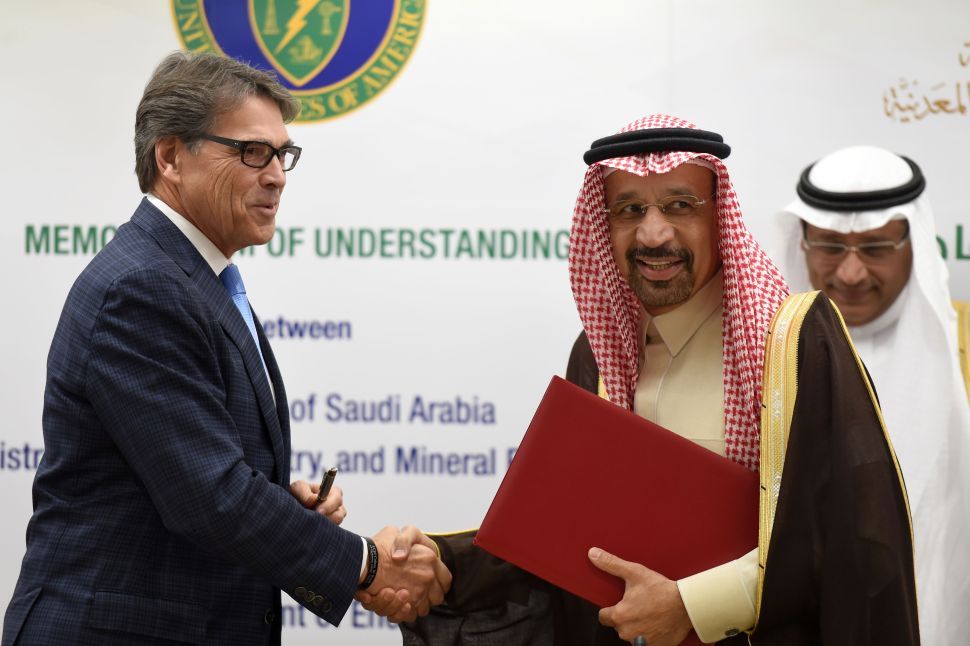