On Thursday, the National Organization for Women-New York (NOW-NY), the New York chapter of the national organization, endorsed Cuomo and Hochul for reelection.

NOW, the largest organization of feminist grassroots activists in the United States, was founded in 1966 and has hundreds of chapters in all 50 states and Washington, D.C. NOW-NY and NOW-NYC, the New York City chapter, have advocated on a number of issues affecting girls and women, including sexual assault, sexual harassment, domestic violence and child marriage—issues it has worked on with Cuomo and other elected officials.

Sonia Ossorio, NOW-NY and NOW-NYC’s president, told Observer on Thursday afternoon that Cuomo is the “best candidate hands down” and that the group did not see “any good reason” to hold off on endorsing him.

“We have many thousands of members around the state,” Ossorio said. “We wanted to let them know he certainly has been very responsive to us in terms of improving policies and creating laws that end discrimination…and we’ve been very excited to work with him in the past four years on many workplace issues for women. So at the end of the day, we were excited to just move forward.”

In her statement announcing her support for Cuomo, she pointed to the fact that he raised the minimum wage—of which women make up two-thirds of earners—as well as his work in enacting paid family leave and making it harder for individuals to discriminate against pregnant workers. She also noted that he paved a path for young New Yorkers to get tuition-free four-year degrees.

And she referred to his work in expanding marriage rights for same-sex couples and closing loopholes to end child marriage. She added that he kicked off the “Enough is Enough” initiative to reduce sexual assault on campus.

In the coming weeks and months, Ossorio explained, Cuomo will be looking to fight for abortion rights, combat workplace sexual harassment and keep firearms out of the hands of abusers.

Ossorio sits on the steering committee of Cuomo’s New York State Council on Women and Girls, which he launched in August 2017. And in 2007, she received the Distinguished Public Service Award from Cuomo, who was New York Attorney General at the time.

And the governor donated the more than $110,000 he received in campaign contributions from disgraced Hollywood executive Harvey Weinstein to Women’s Justice NOW, NOW-NYC’s charitable partner organization that supports public education and outreach efforts and offers legal advocacy and referrals for women.

A little more than a week ago, actress Cynthia Nixon stoked intrigue in political circles when it was reported that she had formed a staff of operatives who worked on the first mayoral campaign of Mayor Bill de Blasio, with whom Cuomo often feuds. And her wife, Christine Marinoni, just resigned from her position as special adviser for community partnerships in the city’s Department of Education (DOE).

Her spokeswoman said she is still exploring the possibility of running.

De Blasio did not formally endorse her, insisting it is “her own choice” but maintaining that she will always be “politically active.” (Ossorio also sits on de Blasio’s New York City Commission on Gender Equity, to which she was appointed in 2016.)

Cuomo, for his part, said he was not bothered that Nixon is working with de Blasio operatives, questioned her name recognition in political circles and jokingly suggested either de Blasio or Russian President Vladimir Putin put her up to it.

When asked whether the NOW-NY’s endorsement of Cuomo means that they are not interested in the other candidates or potential contenders, Ossorio said Cuomo is “hands down a better candidate.”

“While there is one other declared candidate, you can’t really wait when people are kind of publicly ruminating about their desires to run for office,” she continued.

When pressed to share her thoughts on specific candidates, she maintained that the group typically looks at all candidates but believes Cuomo is the “standout candidate.”

“Cynthia Nixon’s ruminations about running hasn’t lit anybody’s fire necessarily,” Ossorio added. “I think so many people are skeptical about the idea of celebrity politicians. Stephanie Miner, I think, is a very interesting woman but she’s not anyone that we have worked with. It just would be inconceivable to not endorse the current governor who has a track record of doing what he says he’s gonna do—of putting forward a woman’s agenda every year.”

As to Gipson, she said she was not familiar with him.

“He really didn’t register on anyone’s radar screen in the women’s rights community amongst the NOW leaders,” Ossorio said.

She added that there is a “sense of urgency and decisiveness” among women and advocates.

“There’s such craziness and lawlessness in our federal government that I think it’s really important to be really clear and decisive when there’s someone who’s on your side and that’s the way that I feel about Governor Cuomo,” she argued.

Gipson told Observer that while serving in the state Senate, he supported the Reproductive Health Act. He also noted Cuomo has been unable to codify Roe v. Wade—a 1973 Supreme Court decision that legalized abortion—into state law.

“I’m sure that my voting record and my positions are directly in line with what they [NOW-NY] stand for,” he said.

He said NOW-NY does “great work” for women’s rights.

“The choices that they make in the endorsement process is obviously something I’m not able to access,” Gipson continued. “I’m sure they have reasons…we welcome the opportunity to hear from anyone who wants to see leadership from the state level that can lead the way in getting legislation passed.”

“We welcome the opportunity to hear from anyone who wants to see leadership from the state level that can lead the way in getting legislation passed,” Gipson continued.

Miner said she has a “strong relationship” with the state chapter of NOW-NY. She has not had any discussions with NOW-NYC.

She was struck by the timing of the endorsement. Cuomo’s former aide was recently found guilty on three counts in a corruption trial.

A spokeswoman for Nixon did not respond to a request for comment on Thursday.

The governor has also received endorsements from the Human Rights Campaign and 1199 SEIU United Healthcare Workers East, New York’s largest union and the largest healthcare union in the United States.

Cuomo’s running mate, Hochul, is facing a challenge from Brooklyn Councilman Jumaane Williams. Ossorio had praise for her as well.

“Lieutenant Governor Kathy Hochul has traversed the state to meet New Yorkers and understand their lives and struggles and has a fundamental understanding of the issues women face,” Ossorio said.

This story has been updated to include comments from Sonia Ossorio, Terry Gipson and Stephanie Miner. 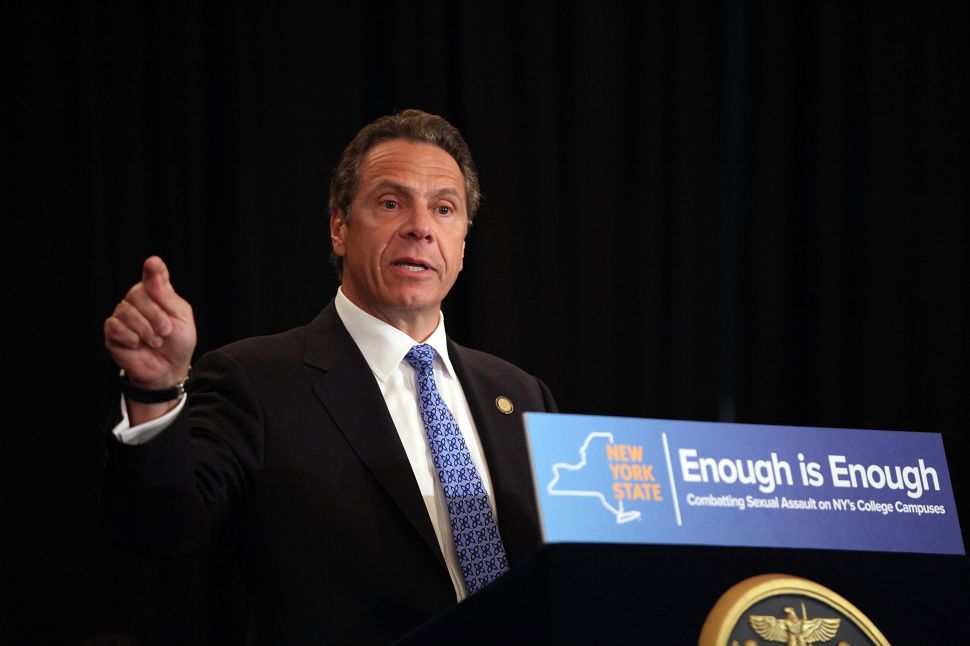