Sex and the City actress Cynthia Nixon has only been a gubernatorial candidate for one day, but she sure made her mark—calling Gov. Andrew Cuomo’s status as a “real Democrat” into question at her formal campaign kickoff on Tuesday morning.

In a blistering 17-minute speech at the Bethesda Healing Center in the Brownsville section of Brooklyn—which consists primarily of people of color—Nixon accused Cuomo of empowering Republicans in the state Senate, blasted corruption committed by one of his former aides, criticized his handling of the city’s beleaguered subway system and even linked him to the billionaire Koch brothers.

She kicked off her speech by noting that her 30-minute ride on the 3 train to the center turned into a one-and-a-half-hour long ride, blasting “Cuomo’s MTA.” And she recounted her humble beginnings, noting she grew up in a one-bedroom fifth floor walkup with her single mother, went to public school and started acting at the age of 12 to support her education at Barnard College.

“This is the state where I have been a vocal advocate for LGBTQ equality and for women’s health and women’s rights, including a woman’s right to choose, and in the last 17 years, I have been traveling across this state fighting for better public schools for my kids but also for all of New York’s kids,” Nixon said.

And she quickly went on the offensive.

She said New York’s schools are the second most unequal schools in the United States and that the gap between the richest and poorest schools has grown wider under Cuomo “than it’s ever been.”

In New York, she explained, the top one percent of New Yorkers earn 45 times what the other 99 percent earn combined.

“It comes from a choice to slash taxes for corporations and the super rich and slash services on everybody else, and it’s a choice we’re used to being made by Republicans like Donald Trump, but for the past eight years, it’s a choice that has been made by our Governor Andrew Cuomo,” Nixon continued.

She said Cuomo encouraged a “backroom deal” to get a group of Democratic senators to vote with the Senate GOP so that Republicans could keep control of the state Senate and added that he allowed the Republicans to draw their own gerrymandered district maps—a move she says suppressed Democratic voters.

Both steps, she argued, gave the Senate GOP the power to block nearly all of the “big, Democratic legislative priorities.”

“Eight years ago, I voted for Andrew Cuomo because I believed that he was a real Democrat,” Nixon added. “But since taking office, he has shown us his true colors.”

But she maintained the developments should come as no surprise.

“The Koch brothers donated $87,000 to Andrew Cuomo when he first ran in 2010 because they knew a good investment when they saw one,” she said. “They knew that whether or not he called himself a Democrat, his policies were going to benefit corporations like theirs and billionaires like them, and they were dead right.”

And she insisted that despite Cuomo’s promises to “clean up Albany,” he and “his cronies have cleaned up for themselves.” She referenced the recent conviction of Cuomo’s former aide, Joe Percoco, whom Cuomo said was his father’s “third son,” on three counts in a federal corruption trial.

“There is a reason that people close to Andrew Cuomo keep winding up under indictment: their corruption,” Nixon argued.

“Cuomo has built a $31 million war chest with the donations of millionaires, billionaires and corporations, but do you know how much of that came from small donors? 0.1 percent,” Nixon explained. “So if you’re a regular person in New York, the chance that Andrew Cuomo is gonna care about your concerns is exactly that: 0.1 percent. New York’s eight years under the Cuomo administration have been an exercise in living with disappointment, dysfunction and dishonesty.”

Nixon vowed to work to end racial and economic inequality in the state, to fully fund schools and ensure that all children are adequately educated regardless of their zip code or skin color, to fix the subway, to end mass incarceration and over-policing of communities of color, to protect affordable housing, to invest in the city’s public housing system and to strengthen and renew the state’s expiring rent laws.

And she promised to help undocumented immigrants facing deportation and ensure that the $15-an-hour minimum wage is “real for all New Yorkers across the state.”

“Now is the time to keep marching forward—from Stonewall to the Supreme Court, from Seneca Falls to the Women’s March and from Zuccoti Park and the Staten Island corner where Eric Garner stood all the way to Albany,” she said.

Zakiyah Ansari, advocacy director for the Alliance for Quality Education (AQE), a group primarily funded by unions which has fought for fair education funding, said New York owes public schools throughout the state $4.2 billion, noting that 75 percent of that money goes to black and Latino schoolchildren.

Ansari, who has lived in Brownsville for 30 years, said they “still don’t have those dollars” and credited Nixon with advocating on educational issues.

“This is my neck of the woods and so I’m excited to be here to talk about what I know… this woman here, Cynthia Nixon, has been a staunch supporter of equity,” Ansari continued.

Following the campaign kickoff, Nixon and Rebecca Katz—who served as special advisor to Mayor Bill de Blasio and is working on Nixon’s campaign—walked with residents to the Sutter Av-Rutland Rd subway station. And Nixon briefly addressed reporters on the subway platform.

She also chatted with residents as she rode the Manhattan-bound 3 train.

“I wanna stay here and blood, sweat and tears gotta be in New York now,” one lady told Nixon.

But Nixon has racked up a little support, too.

Her Sex and the City co-star Kristin Davis, comedian and actress Rosie O’Donnell—whose brother is state Assemblyman Daniel O’Donnell—and Alexandria Ocasio-Cortez, who is challenging Rep. Joseph Crowley (D-Queens/Bronx), have all backed her.

Nixon told the Post that both of them being lesbians is not the issue.

Quinn later took to Twitter to clarify that she was speaking to about her qualifications, not her sexual orientation.

To be clear, Cynthia Nixon’s identity has no bearing on her candidacy and it was not my intention to suggest it did. I want to be clear about that. I would never, EVER, criticize someone because of their identity. 1/4 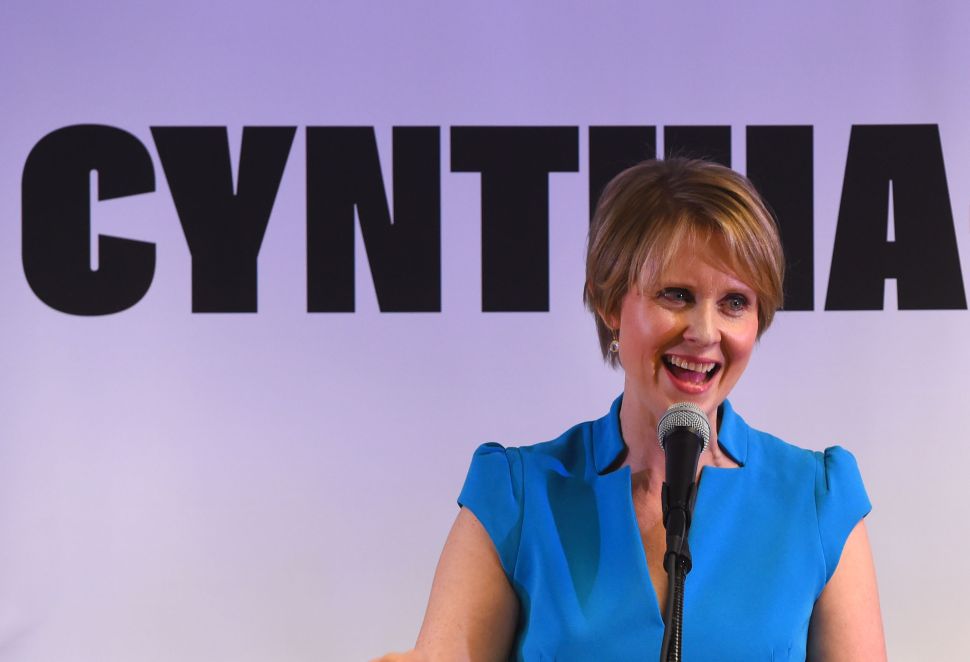