Actress and Democratic gubernatorial candidate Cynthia Nixon says she has received more small-dollar donations in her first 24 hours as a candidate than Gov. Andrew Cuomo has in his seven years as governor.

Nixon received 2,214 contributions of less than $200 on the first day after she formally launched her bid for governor, according to her campaign, which announced the figures on Thursday morning. Cuomo, the Nixon campaign noted, has collected 1,369 small-dollar donations since the beginning of 2011, according to records for “Andrew Cuomo 2018” on the state Board of Elections website.

“Andrew Cuomo has built a $31 million war chest from wealthy corporate interests, lobbyists and billionaires,” Nicole Aro, Nixon’s campaign manager, said in a statement. “And with just 0.1 percent of his support coming from small donations from everyday New Yorkers, that tells you exactly the chance that Cuomo will care about your concerns: 0.1 percent.”

In November 2017, the New York Times reported that Cuomo received more than 99 percent of his campaign funds from donations that exceeded $1,000 and that close to 99.9 percent of the money was from donors who contributed a minimum of $200.

Aro insisted Nixon is aiming to run a different type of campaign that is more people-centered.

“We’re going to do things differently, because this campaign belongs to all of us,” she continued. “Instead, we’re building a people-powered movement to take back New York. The incredible grassroots enthusiasm we’re seeing so far is a sign that Democrats know that we can do better than Andrew Cuomo.”

A campaign spokesman for Cuomo did not immediately respond to a request for comment on Thursday.

But when NY1 Albany reporter Zack Fink asked Cuomo about the latest development at an unrelated press conference in the Bronx on Thursday morning, he dismissed the question. He subsequently called Fink to explain that he will focus on small donors as the campaign progresses.

In a Follow up phone call @NYGovCuomo answers my Q about small donors. He says they are important but right now he does a different type of fundraising operation. But they will be targeting small donors as campaign goes forward.

At her campaign launch in Brooklyn, Nixon assailed Cuomo in a scathing 17-minute speech in which she argued that his policies benefit corporations, millionaires and billionaires. She also referenced the fact that he accepted $87,000 from one of the conservative Koch brothers, David Koch, and his wife Julia, for his 2010 gubernatorial campaign.

Earlier this week, Nixon announced her candidacy after months of speculation and a speech at the Human Rights Campaign’s Greater New York gala where she called for “bluer Democrats” in New York without directly mentioning Cuomo’s name.

Nixon grew up in a fifth floor walkup with her single mother and went to public school. She started acting at the age of 12 to pay her way through school. She attended Barnard College.

But as of today, her net worth is $60 million, according to CelebrityNetWorth, a Los Angeles-based celebrity finance website founded in 2008.

And in 2001, Nixon and her co-stars Sarah Jessica Parker, Kim Catrall and Kristin Davis were said to be making at least $325,000 per episode of the HBO series Sex and the City. Nixon, who played attorney Miranda Hobbes, starred in the show—which had 94 episodes—from 1998 to 2004.

Cuomo, for his part, makes $179,000 a year and has a net worth of $2 million, according to CelebrityNetWorth. And the Empire Center for Public Policy recently reported that 3,568 employees earned more than he did last year. And he ranks fourth among American governors with respect to salary.

Nixon is not the first candidate to pledge to only take money from small donors.

Sen. Bernie Sanders (I-Vt.) frequently noted during his bid for the Democratic nomination in the 2016 presidential election that the average donation amount to his campaign was $27.

Gillibrand quickly endorsed Cuomo for reelection, despite the fact that she has spoken out against a group of breakaway Democrats in the state Senate in a power-sharing arrangement with the Senate GOP that some elected officials and left-wing activists believe has been encouraged by the governor. 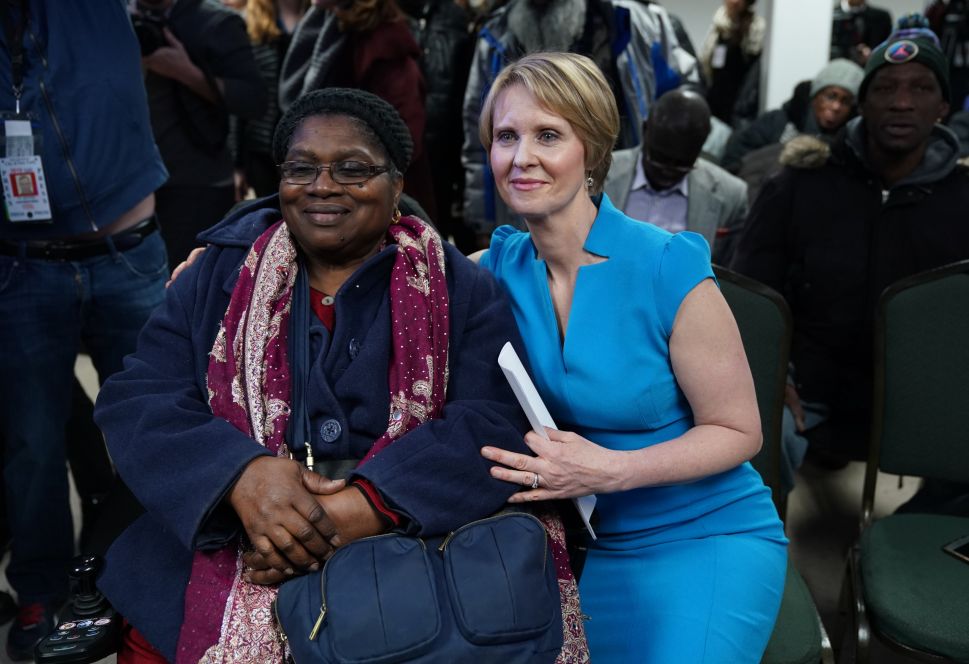