Hours after Miami-Dade schools superintendent Alberto Carvalho accepted then declined to lead New York City’s public schools, Mayor Bill de Blasio said he had made it clear to the nationally-known educator that his alleged affair with a reporter a decade ago would be “rehashed” in New York City and that the Big Apple was the “big leagues.”

On Wednesday evening, POLITICO reported that Carvalho, 52—who is said to have political ambitions—would be succeeding city schools chancellor Carmen Fariña, who is retiring after first taking the helm in 2013.

Carvalho changed his mind during an emotional school board meeting in Miami, in which board members and community members begged him to stay in his current position. He has been serving as the Miami-Dade superintendent since 2008.

Some are speculating that Carvalho feared a controversial skeleton in his closet would be revisited and further scrutinized by the New York City press corps: a rumored affair he reportedly had with a former education reporter at the The Miami Herald while serving as associate superintendent. He was being considered for the Miami-Dade superintendent poison at the time.

“I can’t read his mind,” de Blasio told WNYC’s Brian Lehrer on Friday morning. “I can only tell you that topic was discussed in great detail with him well in advance. I made very clear to him—and I know [First] Deputy Mayor [Dean] Fuleihan did as well—what the media environment was. He was quite familiar with the reality of New York. We vetted him very, very extensively. I went over every element in the vetting with him personally and reminded him that all these issues would be rehashed.”

He said that he offered the job to Carvalho nearly two weeks ago and that he accepted it more than a week ago. The mayor maintained he could not speak to whether that rumor influenced the superintendent’s decision.

If Carvalho had taken the job he would have been chewed up by an NYC press corps that spits out pompous self promoters like phlegm. This whole melodrama took hrs in which he encouraged fawning praise and begging for him to stay in Miami. https://t.co/DBf5MIq3Up

Controversy also ensued throughout Thursday over the fact that Carvalho’s salary was set to be $120,000 higher than Fariña’s. The mayor’s spokesman noted that Carvalho negotiated for it and said Fariña has a $211,000 pension in her package.

At a press briefing late Thursday afternoon, de Blasio told reporters that Carvalho called him to inform him of his about-face while he was at a meeting at Gracie Mansion—a call he believes Carvalho should have made before announcing his decision at the Miami school board meeting.

“I’ve never seen anything like it,” the mayor said. “I’ve been in public service for decades, and I’ve never seen anyone do something like this before. I mean, the people who were blindsided is 1.1 million school children in this city who deserved better.”

De Blasio said that after he offered Carvalho the job, First Deputy Mayor Dean Fuleihan had follow-up conversations with him more than a week go, and he accepted the job. He also said they spoke to him on Wednesday afternoon about sharing the news with POLITICO, to which he agreed.

And de Blasio spoke with him again at 8 p.m. on Wednesday to discuss next steps for his announcement in New York City. But on Wednesday evening, his spokeswoman, Daisy Gonzalez-Diego, told the press in Florida that he had not accepted the job—indicating the superintendent deceived both New York and Miami.

“I am [as] confused as everyone else why anyone who would do such a thing,” the mayor continued.

And while Carvalho was de Blasio’s first choice for the job, the mayor insisted that there are great educators in the city’s schools who will “do great work,” while the city continues its search for a new chancellor. The city immediately resumed its nationwide hunt.

“There’s lots of extraordinary professionals around this country who want to be the chancellor,” de Blasio added. “This is the biggest school system in then country. It is the premier education job in America. People from coast to coast have been asking to be considered, and the search process resumed yesterday. We will have a really great new chancellor quite soon.”

And as to whether the fact that Carvalho was motivated to decline the job due to pleas for him to remain in Miami speaks well of his search process, de Blasio seemed to acknowledge. But he still questioned why Carvalho accepted the job in the first place.

“I think that’s a fair statement, and I do give him credit for what he’s achieved down there, but if he had wanted to stay there, he should never have traveled here twice to interview at length and have dinner with the First Lady and I and all the things she did, but here we are,” the mayor said.

De Blasio seems to be intent on shifting away from the controversy and moving forward.

He praised Fariña’s work, noting that she will remain in the position until the end of March. The mayor said she has done an “outstanding job” and that his focus now is to “build on her legacy.”

“Graduation rates [have] gone up consistently,” he continued. “We’ve seen consistent progress with big initiatives. Pre-K for all, 3K [for all] is coming on now, AP advanced placement courses in all our high schools, computer science for all—all these initiatives are gonna keep growing. The next chancellor will build on them, and I’m quite sure we’re gonna have a great chancellor quite soon.”

Gonzalez-Diego, Carvalho’s spokeswoman, declined to comment. But Carvalho took to Twitter a little before 2:30 pm on Thursday to tweet a link to an article praising him for not taking the job in New York City. 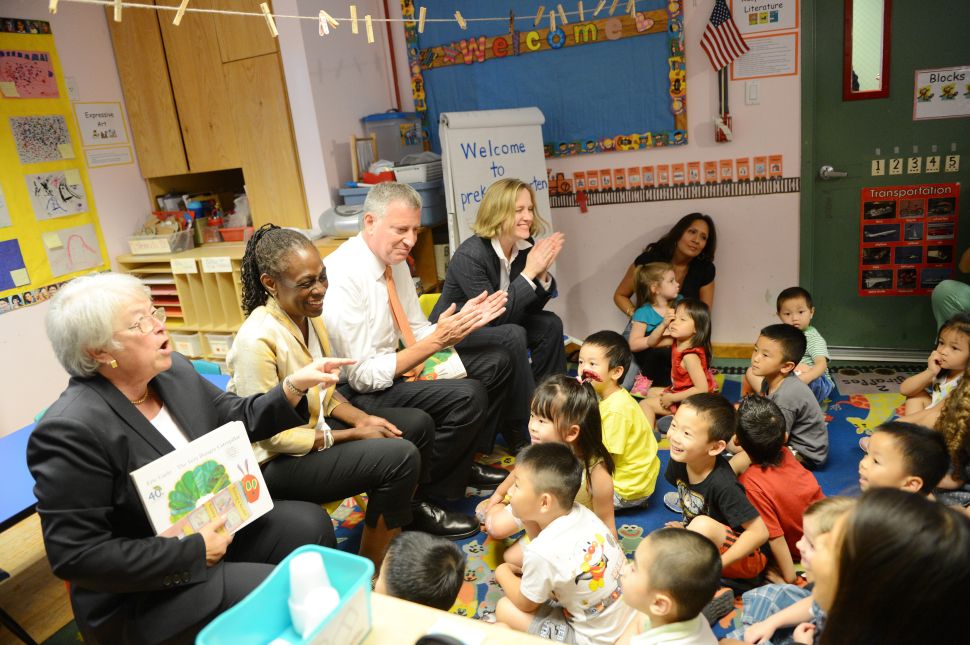