Last season, Andra Dumitrascu’s debut was the most talked about at Paris Fashion Week. It was also the only one that forced editors out of their cars and into the metro for a guerilla fashion show.

“Sans permits, Dumitrascu’s diverse cast of musicians, artists and transgender models…rode the elevator down into the station as commuting Parisians looked on,” W reported at the time. “Models wore pastel logo tops, leggings, and shorts, striding down the platform’s edge. Speakers on trolley carts [blared] a set mixed by a DJ friend specifically for her presentation.”

Now, showing a Dumitrascu collection inside a conventional space has become completely out of the question. But this season, the Berlin-based designer pulled together an interactive show that was equal parts fashion, performance art and surrealism—in less than a week. She took over a Parisian hairdresser’s apartment and filled it with a tarot reader, an accordion player and a dramatic, almost operatic singer.

Burning candles were located in the corners of each room, the walls of which were plastered with sketches and draped with heavy red curtains. At one point, the models staged a runway stroll through the apartment. They then climbed onto a couch that guests were sitting on, and posed. Afterwards, the models wandered through the eccentric space while guests had their fortunes read and sat on the couches drinking beers and soda.

Keep in mind, this was only Dumitrascu’s second show in Paris. Last season, the runway was also pulled together in record time. Her debut show was set to take place in the Pompidou museum, but the designer changed her mind about the venue at the last minute.

“I was actually surprised how un-Pompidou the set-up was,” she told Observer. “The Paris rooftop panorama felt like a corporate five-star hotel; the vibes were bland and rather pointless.” So she scrapped that plan and came up with the idea for her subway show while passing through the Rambuteau station.

Before understanding Dumitrascu’s penchant for using Paris as a backdrop for her unconventional shows, it’s important to know the designer’s unique background: The Romanian-born Dumitrascu worked under Raf Simons, Veronique Branquinho and Bernhard Willhelm, after attending the University of Applied Arts in Vienna. Next, she opened up a nameless shop in Berlin, which functioned as a space to discover new talent in fashion, art and design.

Being a designer who works out of Berlin, Dumitrascu chooses to show her collection in Paris simply because of the history in the city—but also because of the different spaces that may not be the same in say, New York or Berlin. “Of course, it could happen anywhere else, but at this point where I am with the brand, I think it’s a lot about support and love from the outside. Paris is like the most beautiful thing because you get to work with so many amazing people. I could do this in Berlin, but it wouldn’t be the same.”

The models and performers who made the scene all the more interesting were given very little direction by the designer, who cast each model herself. “I think a good cast allows you to give minimal direction,” she explains. “Because you can feel the type of person you’re casting and what the outfit does to them.” And though this was technically a womenswear collection, there were both male and female models walking.

The models wore sleekly tailored pieces inspired by traditional menswear in shades of red, pink, orange and black. Dumitrascu was inspired by the idea of blindness on several levels. “Metaphorical and physical,” she notes. “The color shades are a bit like the colors you see when you look into the sun and close your eyes.” Delving into the theme of blindness, she also explored the beauty of isolation and vanity as it applies to being alone and coping with yourself.

When asked why it’s important to continue having these shows that really break the mold of Paris Fashion Week, she says, “I think doing a show has to be about several things,” before pausing to add: “It’s always great to have a momentum that takes you somewhere.” 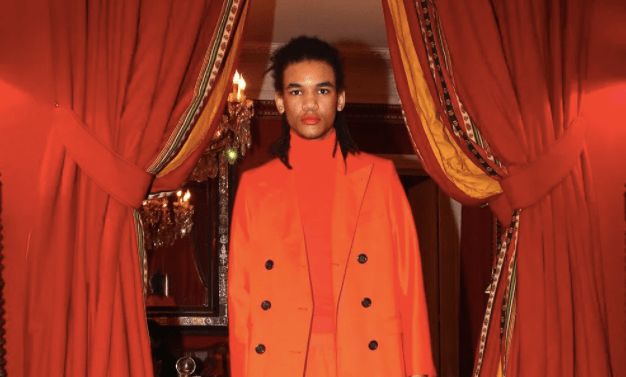