Former Gov. Eliot Spitzer has a new development coming to South Williamsburg soon, but he’s urging people to keep their eyes on the Bronx, Queens and Harlem—areas he says are also up-and-coming neighborhoods.

Spitzer—who took over Spitzer Enterprises after his father died—revamped the company’s portfolio by selling the Crown Building where the company was located for $1.78 billion and putting condo units in the Corinthian for $147 million.

He is close to done with a 857-unit rental complex on three acres in South Williamsburg. The project consists of three luxury rental towers, primarily made up of studios and one bedrooms, at 420 Kent Avenue that he thinks will appeal to millennials in fields such as media, finance, law, technology and banking.

The first tower is slated to open in July, and the other two will be available in January 2019.

In a wide-ranging interview with Commercial Observer at the construction site, Spitzer said was turned on to South Williamsburg after receiving a flyer indicating the site was available.

“You look at this view—who wouldn’t want to live here?” he asked.

“The other cool thing about out here is the amount of office space being built,” he continued. “You walk up to the Navy Yard and see what Billy Rudin [of Rudin Management Company] is building up there. There’s easily over one million square feet of commercial space being built that is drawing serious companies.”

And he said he is not concerned about supply with the abundance of rentals coming online soon.

“I don’t want our building to be an isolated node in South Williamsburg,” Spitzer said. “I want Kent Avenue to be an entire thoroughfare of residences, restaurants and activity. If you’re owning for 50 years, I want this community to develop.”

Spitzer also noted that in the future, there will be restaurants and bars up and down Kent Avenue, adding that Smorgasburg, a weekly open air food market in Williamsburg, is “busy” during the weekend.

“I wish I had a magic wand to designate it or discern where to be,” he added. “That’s the great question everybody asks. The exciting thing about New York is there are always multiple neighborhoods that are on the cusp or are developing in great ways.”

And what are those neighborhoods that are on the rise? Spitzer says Queens and the Bronx have locations that “people talk about.”

“Queens is having a moment where values are going up very rapidly,” he said. “There’s significant demand. The Bronx is a hotspot and is proximate to Manhattan. There’s great transportation, and it provides great views. There’s a lot of exciting stuff going on at the Bronx shoreline; in Queens, in Astoria and Sunnyside, a lot of projects are on the drawing board.”

Spitzer also said 110th Street in South Harlem is another location he is eyeing.

“I’ve always believed 110th Street is going to someday be one of the great vistas and great residential streets in New York City,” he said. “The views from 110th Street South are spectacular. Harlem is culturally and economically so diverse and exciting these days.”

During the interview, Spitzer also shared his thoughts on the problems currently plaguing the city’s subway system and the ongoing feud between Mayor Bill de Blasio and Gov. Andrew Cuomo over who should fund an $836 million short-term subway turnaround plan unveiled by Metropolitan Transportation Authority (MTA) chairman Joe Lhota in July.

“Yeah, they should do it,” Spitzer continued. “They need the revenue. It’s the right idea. It’s been the right idea for many years. Whether it will happen, that’s more complicated.”

As to what the mayor can do with the MTA and other forms of transit, he praised de Blasio’s work on the New York City Ferry Service, as well as on the Brooklyn-Queens Connector, a streetcar project that would connect Brooklyn and Queens along the East River.

“It’s a great idea,” he added, noting the approval process takes time. “I think the notion of having transportation from Red Hook to Astoria, it’s great. I always said when I was in government and since, transportation is what builds urban areas…We need those types of transportation facilities.”

And as to the L train shutdown, which will take place next year, he acknowledged people are “worried about it” and that it will “be disruptive for some period of time.” But he noted that the J and the M are “right here.”

“The bridge is right there,” he said. “The aesthetics of this place are crazy. You have the activity on the river. You have the subway going across. If you were here at night and you saw the FDR Drive with the lights going up and down, it’s like art in motion. And when you see the Manhattan skyline at night, it’s totally cool.”

Should developers play a role in preserving and ameliorating the subway system? Spitzer says everyone should pay their fair taxes and supports the sponsoring of subway stations.

“There’s One Vanderbilt,” Spitzer maintained. They’re doing a significant transportation update with entrances to Grand Central [Terminal]. All that is good and fine. You get a bonus, you pay for it, you contribute to the local economy, that’s what should happen.” 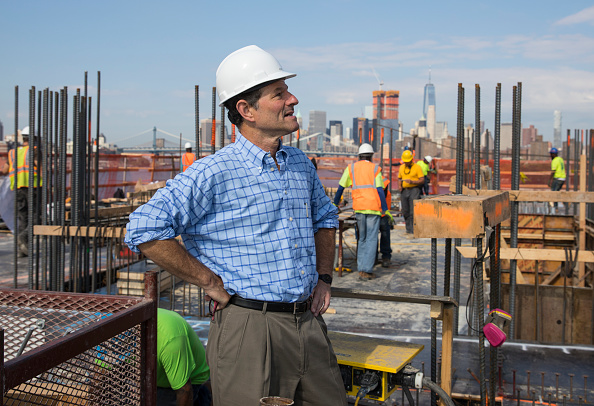