Jessica Jones is back, wearing her iconic everyday uniform that may not scream superhero, but is undeniably her. Though as simple as jeans and a leather jacket, it’s instantly recognizable. For season two, the outfit is back with some alterations—and a new costume designer.

Elisabeth Vastola has taken over from Stephanie Maslansky, the costume designer who originally conceived the looks behind each of Netflix’s Marvel series. Vastola talked to Observer about what we can expect from the new Jessica Jones; spilling details about what she did when they ran out of Jessica’s jacket and why, somehow, this morose superhero is the most relatable mutant on TV.

You know that feeling when your favorite jeans are discontinued? It’s ten times worse for costume designers. The Citizens of Humanity jeans Jessica wore during season one and on The Defenders are no longer available. So Vastola needed an alternative. Because she had inherited an established look, Vastola felt a huge responsibility to the continuity.

“It was important for me to never lose a sense of Jessica, that she still has the same attitude toward her clothing.” Meaning Jessica isn’t going to start wearing super skinny jeans. Instead, Vastola opted for R13 Denim because their jeans are “harder and a little bit more protective, doing a service for Jessica.”

The entire look is hard-wearing to match her attitude. One way to get around discontinued pieces is through custom-made garments. Vastola managed to acquire one last Acne leather jacket—which was shipped all the way from Australia—but because of all the duplicates they’d need for the season, Vastola and her team spent time building the jacket in-house using a tailor. Clearly no other model would do. This is Jessica Jones’s signature item.

Jessica’s also got a new pair of boots, which are a custom Giuseppe Zanotti moto design with a sole that is specific to the shape of Krysten Ritter’s (and her stunt double) feet. “I just felt there was an opportunity there to elevate things,” Vastola mentioned when explaining this change.

One problem that comes from shooting on the streets of New York is that paparazzi photos can reveal visual secrets way ahead of the release. Last summer, photographs of Krysten Ritter as Jessica showed her wearing a Rolling Stones jacket in one shot and a smiley face T-Shirt in another. It was a very different look from her usual. Vastola wouldn’t reveal exactly why, but she promises this season has a very special episode where “we see Jessica in a lot of different ways.”

She was similarly tight-lipped about some other big changes, including who Janet McTeer plays—a newly debuting character shrouded in mystery. All she’d say is that we’ll see “another example of a woman dressing for herself.” A theme that runs throughout this female-centric show.

One aspect that unites the best friends, bosses and potential enemies on Jessica Jones is they don’t decide what to wear based on “the male gaze,” Vastola said. There’s no kicking ass in stilettos here, these women dress for their own needs and own comfort.

In terms of biggest style transformation, Trish (Rachael Taylor) has the most notable changes; she ditches the work wardrobe in Season 2. There is still a “wish fulfillment” element to Trish’s costuming, Vastola said, as she wears a number of high-end brands including a lot of Prada, a fire engine red Lanvin blazer and underwear from Fleur de Mal. Her denim is Acne—again because of the minimal stretch factor—and Trish’s version of Jessica’s moto boots are by Alexander Wang. Plus, Trish has ten jackets to match Jessica’s one. “I think living in New York is all about your jackets. You need a coat,” explained Vastola. “It’s 20 degrees in the morning, 70 at lunch and 40 at night.”

When discussing the relationship between Trish and Jessica, Vastola said she made sure their outfits played off each other. “That is a very special sisterhood. Those two characters together. They teach other a lot, but I think they also affect each other.” This is apparent in what they wear; there’s an element of mirroring between Jessica and Trish in season two while the investigation into Jessica’s past deepens. But Vastola was careful not to put Trish in black leather. Instead, she wears a Rick Owens brown velvet jacket and a plum suede bomber by Cédric Charlier. Trish’s costuming has an athletic tilt, “of course everybody knows she’s representing Hellcat, or at least [an] earlier incantation,” Vastola said.

Despite meeting a grizzly end, Kilgrave (David Tennant) is back in his purple suit, but switching Ted Baker for Paul Smith. Jessica’s sometime boss Hogarth (Carrie-Anne Moss) also returns. Vastola has added pants to her work wardrobe as she is “always looking for ways to expand on the tight office dress, while it is a beautiful look, there is so much more possibility for women in power.” There will be an exploration of Hogarth’s homelife where she will ditch the professional garments for fancy loungewear from Carine Gilson and a one-of-a-kind vintage robe.

It isn’t a coincidence that Jessica Jones is being released on International Women’s Day. And even though the season was filmed before the current sea-change in Hollywood, it is hard not to view this show through the lens of the #MeToo movement. Vastola agreed that Jessica is representative of the types of characters that women really want to see on screens—for her “dressing for herself” style, and for so much more. “It is just amazing because it is exactly what people are asking for and I think what people need right now.” She added, “[This is] a show where women are at the helm and the forefront and the driving creative force behind it. We need that.” It’s a superhero show by women and for women, and audiences are eating it up. 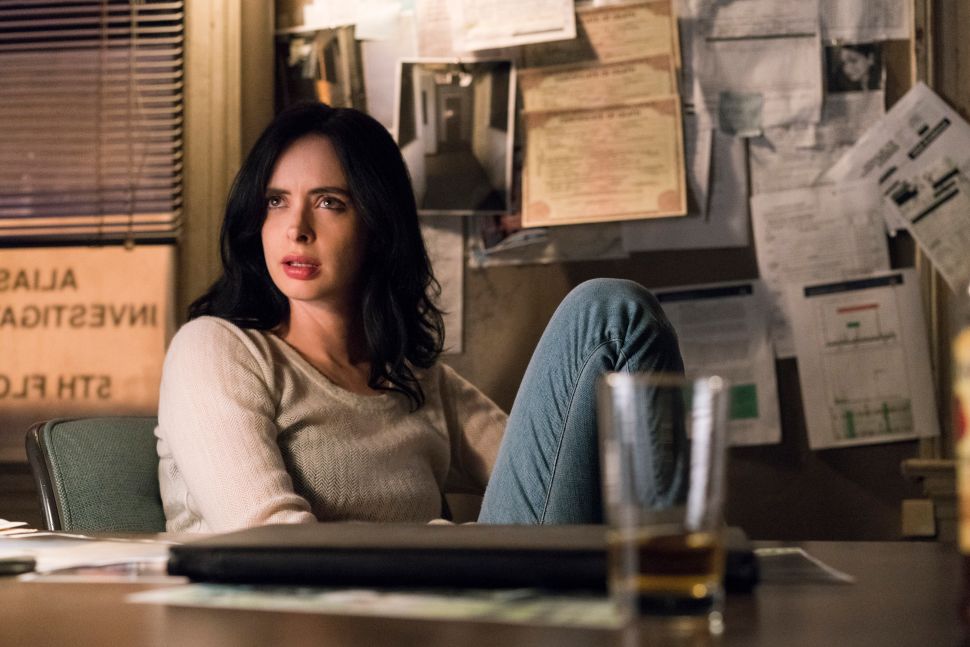