After telling my Uber driver that it was my first time in South Carolina, and more specifically, Greenville, he turned off the modern-day version of the meter and veered into town for an impromptu tour. In New York, I would consider calling the police immediately. But this wasn’t a case for the FBI, it was good old-fashioned Southern hospitality at its finest.

My driver ventured through the picture-perfect downtown, which he admitted was a little sketchy when he was a student at the local Furman University in the ’80s. Today, the city looks more like something out of a Hallmark Channel movie Meghan Markle would star in, complete with twinkling lights and sweeping waterfall views.

It’s the type of idyllic setting where it’s almost a requirement to own a dog, in particular, a picture-perfect Golden Retriever puppy. Preppy thirty-somethings in collared shirts roam the streets while mom and pop shop owners willingly share their life stories; many transplants went to college in South Carolina and then moved to Greenville post-grad, bringing along their extended family.

According to a 2017 report by the U.S. Census Bureau, Greenville is the fourth fastest growing city in America. And if you spend a weekend there, it’s more than likely you’ll consider packing up and moving, especially if you’re coming from a bustling major city that’s less than picturesque. The streets are sparkling clean and their famous chefs are whipping up James Beard award-winning, innovative Southern dishes.

If you’re considering venturing to Greenville for a weekend (or, you know, to start a new life) here’s what to know before you book your ticket.

When I told my Uber driver I was staying at the Embassy Suites, he immediately announced that it was the city’s best hotel, causing me to wonder if he was perhaps planted to encourage visitors to fully appreciate the town. Alas, he was not, and most people agreed that the 156-room hotel was the ideal option, especially since it only opened in November 2016 and offers suites that are far more spacious than most New York apartments.

While you can easily Uber around Greenville, the Embassy’s proximity to downtown means you can walk the entire town without ever having to get in a car. But the real pièce de résistance is the hotel bar on the eighth floor, Up On the Roof, which is, you guessed it, on the rooftop, replete with 360-degree sweeping views of the city and fire pits for the surprisingly chilly weather. It’s where you can expect to find plenty of people celebrating college game day wins and sipping custom cocktails, like the Roof-Tini.

Italian restaurant Jianna is hands down the best restaurant in Greenville, with Executive Chef Michael Kramer creating decadent house-made pasta dishes daily, including Radiatori with garlic and kale and the mushroom agnolotti, all served in a delicate porcini broth and topped with pancetta.

If you want your shrimp and grits fix, there are multiple opportunities. Husk has become a Southern mainstay, with locations in Charleston, Nashville and Savannah. James Beard Award-winning Chef Sean Brock serves up classic Southern dishes with a twist, like their Deviled Eggs with Pickled Okra and Trout Roe, or their Okra Stew. Brock’s grits have become particularly infamous for their rougher texture, which, yes, is a good thing.

The Anchorage is another James Beard 2018 semifinalist, with a vegetable-forward menu with a focus on small plates. Their intention is to showcase the best seasonal ingredients, so they switch up the menu daily.

Above the Nose Dive pub is Crafted, a craft cocktail bar that wouldn’t be entirely out of place in Williamsburg. Much of its hipster aesthetic is due to Vogue-approved bartender Walker Pickering, notable for his signature handlebar mustache. Pickering can easily tell you the history of any drink you order and has created an inventive cocktail list loaded with cheeky names like “Felize Noggy Nog” and “I’m Like a Samantha.”

Pickering not only creates custom cocktails but actually prefers to do so—simply tell him what kind of liquor you like and he’ll serve up on of his latest creations before it even hits the menu. For me, that meant just the right hint of spice in his new version of a Moscow Mule, which he mixed with Jalapeños and fresh ginger.

Many of Greenville’s residents are true outdoorsmen and women, who take advantage of the proximity to the Blue Ridge Mountains. The nearby falls provide the perfect in-between for those who didn’t bring their backpacking gear on vacation, but still want to embark on an outdoor adventure. There’s an enormous suspension bridge to snap selfies on while visitors view the Reedy River Falls, with no hiking boots necessary.

If hiking isn’t in your repertoire and you haven’t been on a bike other than spin class, there are candle making classes at the local Magnolia Scents by Design where you can fastidiously choose your own scent and custom create a color from their hundreds of options.

There are also local boutiques seemingly on every corner, full of Lilly Pulitzer and Louis Vuitton. In fact, there are only three national chain stores in the entirety of downtown—Brooks Brothers, Anthropologie and Mast General Stores. One standout is BeijaFlor Jeans, whose pants use tech-savvy memory stretch fabrics to contour to women’s bodies. Once you’re toting your bags back to the hotel you’ll feel like an avid hiker. 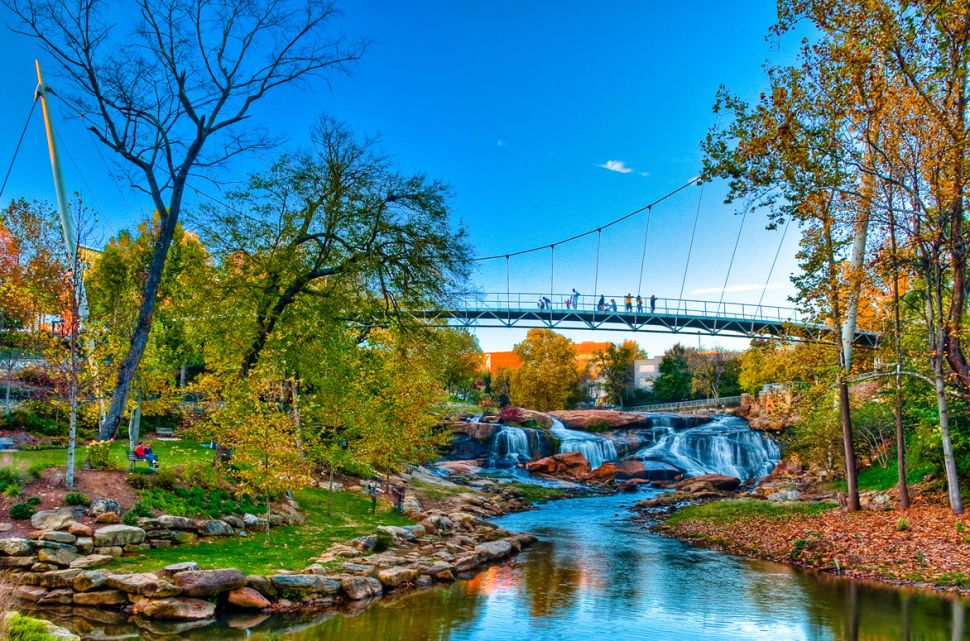