This story has been updated to confirm that the three victims who were taken to the hospital in critical condition died shortly after they arrived at the hospital.

All five passengers in a private helicopter that crashed in the East River off Manhattan in New York City on Sunday evening died, according to the NYPD.

A helicopter descended into the East River near 86th Street north of Roosevelt Island, according to NYPD Commissioner James O’Neill, who held an emergency briefing with FDNY Commissioner Daniel Nigro at the East 34th Street Heliport following the incident.

O’Neill said the NYPD and the FDNY received dozens of calls about the incident shortly after 7 p.m. The NYPD, FDNY, the U.S. Coast Guard and a private tugboat all responded and conducted the search and rescue operation.

Six people—including the pilot—were aboard the helicopter, which is owned by Liberty Helicopters, a helicopter sightseeing and charter service in New York City, and was a private charter being used for a photo shoot, O’Neill explained.

“The National Transportation Safety Board will be conducting an investigation into the crash,” he said. “This is preliminary information. This just happened a couple hours ago.”

Nigro said the pilot—identified as 33-year-old Richard Vance of Danbury, Connecticut—freed himself but the other five were not able to do so. Two victims were pronounced dead on the scene, while the other three were taken to the hospital in critical condition.

An NYPD spokesman told Observer on Monday afternoon that the other three victims died shortly after they arrived at the hospital, between 9 p.m. and 11 p.m.

The five passengers are Brian McDaniel, a firefighter and Trevor Cadigan, a video journalist, both from Dallas; Carla Vallejos Blanco, a tourist from Argentina; and Tristan Hill and Daniel Thompson, two helicopter employees.

Divers went into 50 feet of to get the victims out, Nigro noted.

“The pilot is O.K.,” Nigro said. “He was taken to the hospital to be checked out, but he was able to get out. It took a while for the divers to get these people out. They worked very quickly as fast as they could. It’s 50 feet of there. There was a four mile an hour current. The temperature was below 40.”

From Roosevelt Island, you can hear and see a lot of ambulance trucks responding to helicopter crash in East River pic.twitter.com/ng3tZr5GPj

In a statement right after the incident occurred, the U.S. Coast Guard confirmed that five people had been recovered by FDNY and NYPD divers but said their conditions “are currently unknown.”

At 6:36 p.m., Eric Phillips, Mayor Bill de Blasio’s spokesman, said the mayor—who is currently in Texas—was briefed by O’Neill and Nigro and that NYPD and FDNY divers were already on the scene and in the .

The Mayor was just briefed by the police and fire commissioners. At least one survivor, at least two fatalities. Divers are still in the water.

We are monitoring the situation and our thoughts and hope for safe recovery are with those who were aboard. We are thankful for our first responders at the scene. https://t.co/Lf82c1dPTr

City Council Speaker Corey Johnson told NY1 that the video of the incident was “very jarring and upsetting to watch.” He also thanked FDNY and NYPD personnel for their work in assisting the victims.

“It was so horrific and hard to see it crash the way it did, with the propeller still cutting into the ,” Johnson said. “So clearly the pilot did not have control and the loss of life tonight on a cold, late winter night is very upsetting.” 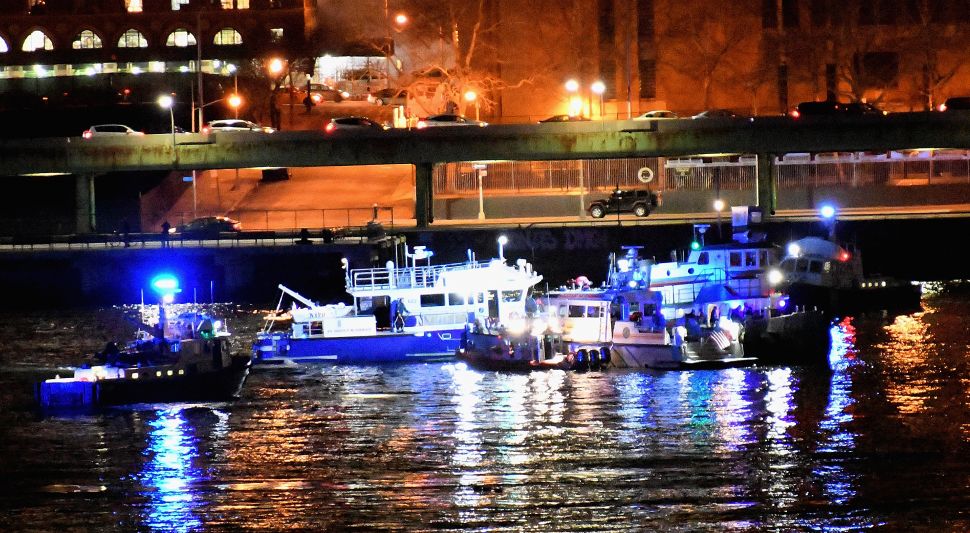