You may not think millennials have the attention span for 20-minute explainers on Bitcoin, Italian politics or the Confederacy.

But such is the power of bespectacled British comedian John Oliver and his HBO show Last Week Tonight: audiences now care about and pay attention to these types of issues.

Funneling current events through a satirical lens is nothing new—Saturday Night Live’s “Weekend Update” has been doing it for over 40 years.

But Oliver’s perspective (like that of his mentor, Jon Stewart) has made him an essential part of many Americans’ media diets. YouTube clips of his show rack up millions of views, and when he asks his viewers to spring into action they deliver.

So what exactly is Oliver’s key appeal?

“His Britishness, since it allows him to adopt the role of the assumed-to-be-friendly foreigner trying to understand just what’s going on,” Jonathan Gray, professor of media and cultural studies at the University of Wisconsin, Madison, told Observer.

“The saltiest language and the most all-out searing attacks on Trump, all delivered with that intelligent British accent,” Paul Levinson, professor of communications and media studies at Fordham University, chimed in.

“It’s a combination of his satire and his in-depth focus on certain issues,” Amy Becker, assistant professor of communications at Loyola University Maryland, added.

But whether it’s his accent or his approach to the news, one thing’s for sure: During his four years on the air, Oliver’s had an impact—especially among millennials.

When The Daily Show With Jon Stewart ended its run in 2015, the Pew Research Center found that roughly 12 percent of Americans cited the show as one of their main sources of news.

No comparable study has been performed among Oliver’s viewers, but experts believe he and fellow Daily Show denizens like Samantha Bee have picked up Stewart’s baton.

“Sam Bee is all about feminist rage, while John Oliver’s pieces stand out as legitimate news,” Gray said.

“News with a comical bent turns out to be a pretty accurate reporting, albeit with a progressive perspective,” Levinson added.

That progressive perspective has led some analysts to worry about young people getting all of their news from satirical sources.

But that worry is largely unfounded: the same Pew study that measured Stewart’s influence found that millennials read sites like the Huffington Post or newspapers like USA Today as often as they watched The Daily Show.

“It’s clumsy to make it sound like people are getting news from satire instead of something else when actually people consume news from a wide variety of areas,” Gray said.

Oliver actually doesn’t want his viewers to consider him a news source at all. He has said on multiple occasions that he is not a journalist—and indeed, his representatives declined to make him available for this story.

He’s taking a page from Stewart’s playbook with that response. During a contentious Crossfire appearance in 2004, Stewart maintained that it wasn’t his place to ask politicians tough questions.

“The show that leads into me is puppets making crank phone calls,” Stewart said, referring to the comedy series Crank Yankers.

But while Oliver and Stewart may bristle at the journalist label, their shows are inherently journalistic in nature.

“What a journalist is is up for discussion,” Gray added.

But whatever you label Oliver, his segments have real world effects.

He’s been the subject of several (in his words) “legally spicy” lawsuits. Most recently, he beat a defamation suit from coal baron Bob Murray, who sued HBO over a segment in which Oliver called him a “geriatric Dr. Evil.”

Oliver has also had an impact outside the courtroom.

Most of his segments end with a request to viewers, such as blitzing the Federal Communications Commission with comments about net neutrality, donating to scholarships for female engineers or buying a children’s book about Vice President Mike Pence’s gay pet rabbit.

And these gambits work: Oliver’s fans crashed the FCC website, raised $25,000 for engineering scholarships and made that kid’s book an Amazon bestseller.

This phenomenon even has a name: the “John Oliver effect.” And it’s no fluke.

“He brought different voices to the debate and diversified the discussion,” Becker said.

“These shows are allowed to say something’s bullshit and call out the absurdity without bias,” Gray added. “They have the ability to really make people care about something and express it in simple terms.”

Oliver has also inspired other late night hosts to be more open with their opinions. For example, Jimmy Kimmel’s passionate crusade to get healthcare for sick children, like his infant son, made him a public face of the issue.

“At that point, there’s no difference between Jimmy Kimmel and a New York Times op-ed writer,” Levinson said. “He’s acting as a journalist.”

Even so, late night shows aren’t the most impartial news source.

“Comedy is more critical to politicians, and that criticism may cause people to be more cynical,” Becker said.

“Satirists seem like a glowing, shiny alternative, but they’re not Cronkite,” Gray added. “All politics and journalism has risks.”

But on the flip side, a well-placed satirical jab is sometimes the perfect response to a false or misleading claim.

“The best way to combat fake news is to have truth out there in the marketplace of ideas,” Levinson said.

However, consumers also sometimes expect too much from Oliver and his ilk.

In the lead-up to the 2016 election, countless news articles claimed Oliver had “destroyed” or “eviscerated” now-President Donald Trump.

That obviously didn’t happen, and in hindsight, it may seem foolish that people expected it would. After all, these hosts can only do so much.

“It’s entirely unrealistic to ask John Oliver to save the world,” Gray said.

But given the fragile state of the media and government these days, it’s not too surprising that so many people pinned their hopes on a comedian.

“We expect more of a lot of pieces of the media, and that includes relying on satirists to hold the government in check,” Becker said.

“Expectations get piled up high precisely because a lot of people have lost faith in journalism to such a degree that they’ve moved their expectations previously held for journalists over to satirists,” Gray said. “When someone looks to John Oliver to save us, it’s because they’ve already judged regular journalists unequal to the task.”

In the end, the best course of action for Oliver’s fans is to stay informed, take everything with a grain of salt and change the channel if they need to.

“It’s foolish of people to expect anything of anyone in news reporting except the truth,” Levinson said. “They’re human beings, and they do what they’re supposed to be doing. If people don’t like it, they don’t have to watch.” 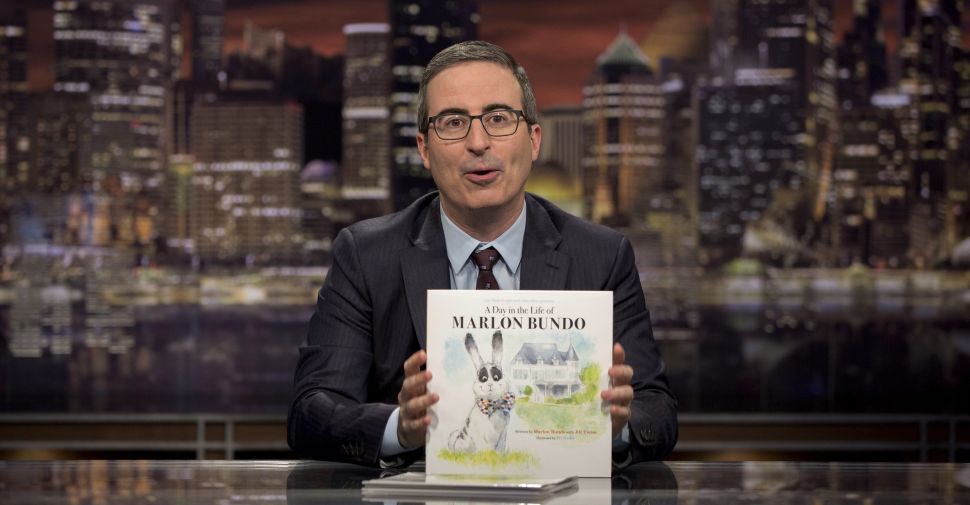