I don’t normally admit this in public, but my family and I own not one but three blowtorches. In our family, each one has its use in an activity that blends science, math and art. The little butane torch is for making food, like crème brulée. Another torch, inspired by YouTube’s wildly popular Backyard Scientist, is for making small explosions inside bottles. The third is for melting glass beads for jewelry-making.

Admittedly, collections of blowtorches may not be for every parent. But finding fun and slightly subversive ways to spark kids’ curiosity should be. A growing body of research shows that being able to exercise curiosity plays a highly significant role in a child’s academic performance and its benefits persist throughout life.

We see this in countless cultural phenomena that engage kids’ curiosity—and as a result, stoke an immense amount of learning. The musical Hamilton has captivated children as well as adults, thanks to characters who use bad words, love people they’re not supposed to and argue when they’re supposed to be starting a country. The resulting danger and suspense make audiences want to learn more. The massive hit app “Pokemon Go” lured in kids with the excitement of trespassing on neighbors’ yards; in the process, children memorized immense lists of facts about the characters’ elements, special powers and so on. The current DIY slime craze adds the element of danger, i.e., fear of destroying your bedroom carpet. And the smash hit trivia game “HQ” provokes us to better our immediate recall under the threat of losing (game) lives.

It turns out that the resulting mental state is a very healthy and productive one for children. “Curiosity is a state of mind,” writes Oscar-winning producer Brian Grazer in A Curious Mind: The Secret to a Bigger Life. And that state of mind is one that is highly conducive to learning and retaining information.

Developmental psychologist Marilyn Price-Mitchell has pointed out that curiosity has as big an effect on academic performance as hard work does. It helps students retain information longer, and is linked to a range of positive behaviors, including “tolerance of anxiety and uncertainty, positive emotional expressiveness, initiation of humor and playfulness, unconventional thinking and a nondefensive, noncritical attitude.”

Another study found that satisfying one’s curiosity stimulates the pleasure-producing neurochemical dopamine, helping the brain absorb and retain information and experiences more deeply. Curiosity is associated not only with higher grades, superior reading skills and materially higher IQ scores than those of less curious students, but even with forestalling the effects of Alzheimer’s disease later in life.

It would follow that schools and teachers should be doing everything they possibly can to encourage students’ curiosity. Many do try, but real-world classroom dynamics can complicate matters. “Too much” curiosity, after all, can be seen as disruptive. As developmental and cognitive psychologist Wendy L. Ostroff explained in her book Cultivating Curiosity, “Curiosity is by nature subversive to the traditional, top-down classroom. When order in the classroom is desired most of all, curiosity can become a liability.” Efforts by teachers to control or focus the classroom too tightly, and emphasizing rule-following above all else, can dampen inquisitiveness.

Additionally, disparities in proficiency levels mean that a significant number of students are not really being challenged. A recent study by Jonathan Plucker of Johns Hopkins’ Center for Talented Youth found that the top 25-35 percent of U.S. fourth- and fifth-grade students are performing at least a year ahead of their actual grade levels in certain subjects. In these cases, kids with high aptitude are likely not suffering from any natural lack of curiosity; they’re simply bored because they’re already proficient in the material being taught.

So what can we do to spark greater curiosity among students and encourage it in the classroom? On March 21, a group of educators and I will be holding a professional development seminar with 300 middle-school teachers in Newark, New Jersey, to discuss this exact challenge. Our team includes Angela Duckworth, Founder and CEO of Character Lab; Sule Alan, an economist focused on measurement of the impact of curiosity; and Veronica Grazer, wife of Brian Grazer and a major influence on his book. For all the beauty of seeing a child’s curiosity come to life, instilling that excitement in teachers to pass it on to multitudes of students has an exponential effect.

For my part, I’ll be focusing particularly on the role of another important group of educators: parents.

Curiosity is a habit like any other, and encouraging that habit begins at home—and continues there after school. Indeed, the tension between creativity and compliance—between keeping order and encouraging a sense of wonder—may be as recognizable to parents struggling to get chatty kids to bed as it is to teachers trying to manage two dozen ping-ponging students. Still, the benefits of curiosity are so dramatic that there’s a strong case for sacrificing some structure and formality for the sake of whetting kids’ appetite for discovery. And time for exploring at home could help kids navigate the boundaries between exercising curiosity and following rules in a more structured setting. Here are some ways to stoke curiosity in the home environment:

Give children ample time to wrestle with those questions. At my nonprofit, Bedtime Math, we’ve noticed that our most nervous math club coaches jump in too soon to “save” kids who can’t produce a math answer quickly. This deprives children of the incredible satisfaction of wrangling with a challenge and mastering it. Curiosity often leads to hard work to hunt down the answer, so we need to signal that hard work is par for the course.

Invite playfulness and mischief. As exhausted as every parent feels by day’s end, the more we can corral our energy to allow that extra burning question, that extra conversation, the more we reward kids for their inquisitiveness. In our teacher seminar, I encourage teachers to accept one off-topic question from their students each day, and to take three to five minutes to explore it. With help from Google and ubiquitous smartphones, teachers can liberate kids to drive the class’s learning, and to see firsthand that knowledge is relevant and exciting. My own children’s favorite teachers are all happy to off-road briefly from the day’s lesson plan. It is a free education reform that could do wonders in our classrooms—and our homes.

Leave room for risk. Nothing quashes curiosity quite like this generation’s hyper-babyproofed, bubble-wrapped childhoods. Common-sense safety is one thing, but perhaps rather than strictly issuing dire warnings about staircases, electrical outlets, or the stove, it would be better to guide and encourage young kids to navigate challenges like these. The victories also build lifelong self-esteem.

Ultimately, writes Brian Grazer in A Curious Mind, “Life isn’t about finding the answers. It’s about asking the questions.” In many respects, the same could be said about education—and about the ways we raise our children.

Laura Overdeck is the founder of Bedtime Math and chair of the Overdeck Family Foundation. 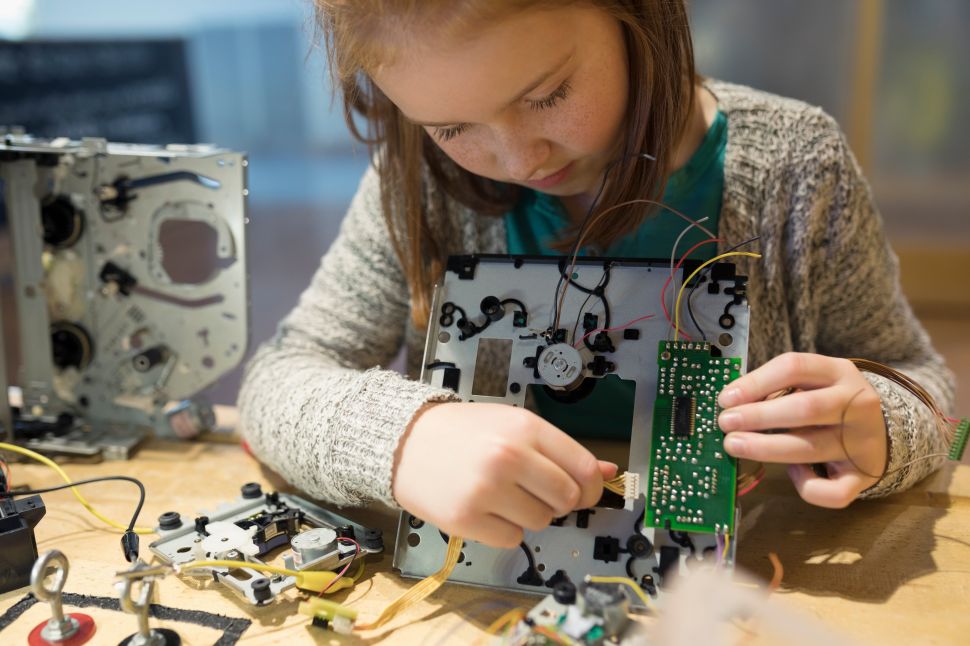