Every year, one under-the-radar company debuts at South by Southwest—the annual tech and music festival in Austin, Texas—that skyrockets to fame. In 2018, while everyone was betting on talks by Elon Musk and panels pitting Facebook leaders alongside media experts, an eight-month-old company with no outside investors captured every attendee’s attention.

When it’s powered off, ICON’s 3D printer looks like a large piece of scaffolding, a big metal frame with nothing inside it. But then, an engineer inputs a building’s blueprint into the printer using a computer. The printer comes alive, and the big metal frame moves and pours concrete in the shape of a home, one layer at a time.

Over the course of roughly 12 hours, a complete concrete structure is built.

As many have pointed out, ICON has the potential to completely disrupt the construction industry. In the U.S. housing market, for example, the construction required to build a home accounts for roughly 61.8 percent of the house’s selling price. Watching ICON’s 3D printer “draw” a house’s concrete skeleton, it’s impossible not to think about all the labor—and therefore cost—that this technology would remove from the equation.

But ICON co-founder Evan Loomis rarely, if ever, mentions his ambitions to compete with homebuilders. Instead, he talks about two things:

There are roughly 1.6 billion people on our planet who lack adequate shelter, meaning they are either homeless or live in shelters—like disaster tents or abandoned buildings—that do not qualify as homes.

Across the world, a great deal of the violent crime that occurs, Loomis argues, happens because people lack the protection of a home. When people are sleeping on a curb, they’re vulnerable to both the elements and opportunistic criminals. The desperation of lacking shelter can also lead individuals to do things they otherwise wouldn’t do in order to survive.

Solving homelessness is almost impossibly challenging. Homes are expensive and require time expertise to build. Whereas infrastructure investments like wells, roads and hospitals can be built to service entire communities, the number of people that can be sheltered in one house is comparatively small. Loomis says of the problem, “We cannot throw enough manpower at this problem. We need innovative technology that will let us take a quantum leap forward in terms of building homes quickly and affordably.”

ICON is a potential “quantum leap” in solving homelessness; One printer could theoretically build multiple affordable houses every day, without a large construction crew, whereas the average house takes six months to build.

But in order for ICON to make a dent in the world’s homelessness problem, it needs buy-in from governments. In this vein, ICON recently partnered with New Story, a charity that builds homes around the world, to build an entirely 3D printed community in El Salvador to house citizens who are currently homeless. Eventually, ICON would like to develop a printer so easily transported that, as Loomis says, “Locals could bundle [the printer] up in their truck, drive to their land, and print the home they want in a day, no matter where they lived.”

What ICON does, in essence, is remove nearly all of the limiting factors in modern construction, and in the process, solve some of the world’s most pressing problems.

Globally, the number of homeless people has always been too high for any one organization or government to build enough shelters for everyone who needs one. If ICON can produce a house in just 12 hours, however, there may just be a solution to housing the homeless.

If Loomis has his way, however, ICON won’t just be responsible for housing people on planet Earth. ICON also plans to construct “off-world habitats” in space.

One of the many obstacles space programs face is the difficulty of getting big, complex structures into space. Obviously, in order to take anything into space, it needs to fit in a spaceship. NASA has found creative solutions to this problem in the past—structures that can fold up like tents, for example—but for the last few years it has been designing robots to automate the construction of new buildings off-planet.

ICON’s printer, however, is already operational, and Loomis believes it makes perfect sense for a government program like NASA—or a private operator like Elon Musk’s SpaceX—to use ICON’s printer to construct their off-planet buildings.

Whatever space agency or company ultimately partners with ICON will be able to send a printer to Mars or the moon and print a whole community of houses. There will of course be other considerations and developments—experts aren’t even sure what type of shelter will be needed off-planet—but ICON already has the basic technology that allows homebuilding on other planets.

Even though humans have spent millennia getting better at building things, modern construction isn’t efficient. In order to fix all of the problems caused by humanity’s inability to build affordable homes quickly and scalably—global homelessness resulting from inaccessibly priced housing, for example—someone needed to invent an entirely new way to build things.

ICON isn’t just a market disruptor; it’s an entirely new model for construction, one that could house the homeless, make homeownership more accessible, and build structures on Mars.

As a bonus, it could also disrupt the $10.5 trillion dollar construction market. 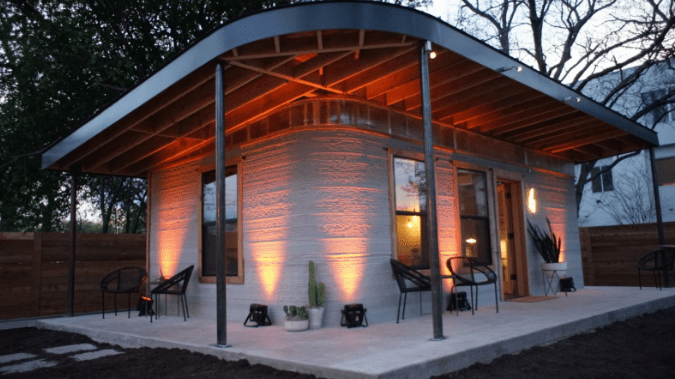