Li Ka-shing, Hong Kong’s wealthiest man for the last 20 years and currently the 23rd richest person in the world, is retiring after a lifetime of extraordinary success. With a sprawling global empire and a net worth of $35.5 billion, Li, 89, has been called “the Warren Buffet of Asia.” He is a controversial household name; some see the ultimate rags-to-riches story, while others see Hong Kong’s widening wealth gap. As Li, one of Asia’s most influential business tycoons, prepares to hand his companies to his sons, many are reexamining his life and rise.

Here are 10 things you should know about Li Ka-shing, the richest person in Hong Kong.

1. He was a high school dropout. In 1940, Li, then 12 years-old, had to quit school as his family fled to Hong Kong to escape the Japanese occupation. His father, who had been an elementary school teacher in their home province of Guangdong, worked at a watch strap factory once the family arrived in Hong Kong. Unable to continue his education, Li joined his father at the factory, manufacturing and selling plastic parts. His father died soon after, and at 15 years-old, Li became his family’s breadwinner, supporting his mother and three younger siblings.

2. He founded his first company at age 21. Using savings and loans, Li started Cheung Kong Industries, a plastics company known for manufacturing plastic flowers. The company quickly expanded, and by the 1960s, Li was experimenting in property development and real estate investments.

3. He was the first Chinese person to take over a British company in colonial Hong Kong. In 1979, Li effectively gained control of the trading company Hutchinson Whampoa. Created by a British merchant, Hutchinson Whampoa was a significant economic force that symbolized British colonial influence by the time Li bought his shares. Although Hong Kong’s transfer of sovereignty back to China (commonly known as the Handover) wouldn’t take place for another 20 years, Li’s purchase indicated an early shift in power away from the British elites.

4. He heads a global empire that touches nearly every major industry. In 2015, Li merged Cheung Kong and Hutchinson Whampoa to create CK Hutchinson Holdings, an international conglomerate that operates in over 50 countries. Li now has a hand in various industries, including retail, infrastructure, telecommunications, media, energy, technology and more. His products and services are everywhere; people buy groceries from his stores, rent his apartments, and heat their showers with his energy.

5. He’s famously frugal. For years, he wore a simple $50 Seiko watch, and only recently switched to a $500 Citizen watch, still many times cheaper than the Rolexes many billionaires prefer. People joke that his main indulgence is golf, which he used to play four times a week; nowadays, that number has dropped to once or twice a week.

6. But he’s not one to turn down life’s luxuries. Although Li lived in the same house for decades, which he bought in the 1960s for $13,000, he now enjoys a four-story mansion in Deep Bay, one of Hong Kong’s most expensive neighborhoods. Three streets alone house 19 of the city’s richest residents. Li also owns a Gulfstream G550 private jet and a sleek Riva 84 yacht. And on the top floor of the CK Hutchinson headquarters, his office sits next to a private pool, dining room and garden.

7. He caught the tech boom early. Li recognized the importance of the technology and media industries just as social media began surging. He invested in Facebook in 2007, in Spotify and Siri in 2009, and he has continued to invest in other startups including apps and cryptocurrencies. Llast year, Li joined forces with Jack Ma, the richest man in Asia, to expand mobile phone payment in Hong Kong.

8. He is a political force. Li had close ties with Deng Xiaoping, who led China in the post-Mao era, and former President of China Jiang Zemin. He was also active during the 1997 Handover; he was an adviser to Jiang, as well as a member of the committee that drafted the Basic Law, Hong Kong’s postcolonial constitution.

9. Like every billionaire, he has his share of critics. Some say he is a prime example of Hong Kong’s increasingly drastic wealth disparity; the wealthiest 10 percent of Hong Kong households earn 44 times more than the poorest 10 percent. Others criticize him for being too friendly with the Chinese government, particularly when tensions between Hong Kong and China were at an all-time high during the 2014 pro-democracy protests. He voiced sympathy for the student demonstrators but told them to go home, prompting widespread backlash.

10. He has donated over $20 billion to charity. Founded in 1980, the Li Ka Shing Foundation provides donations and services both in China and overseas, ranging from education initiatives to medical resources. As Li prepares to step down, he announced that he would spend his retirement focusing on the Foundation and philanthropy. 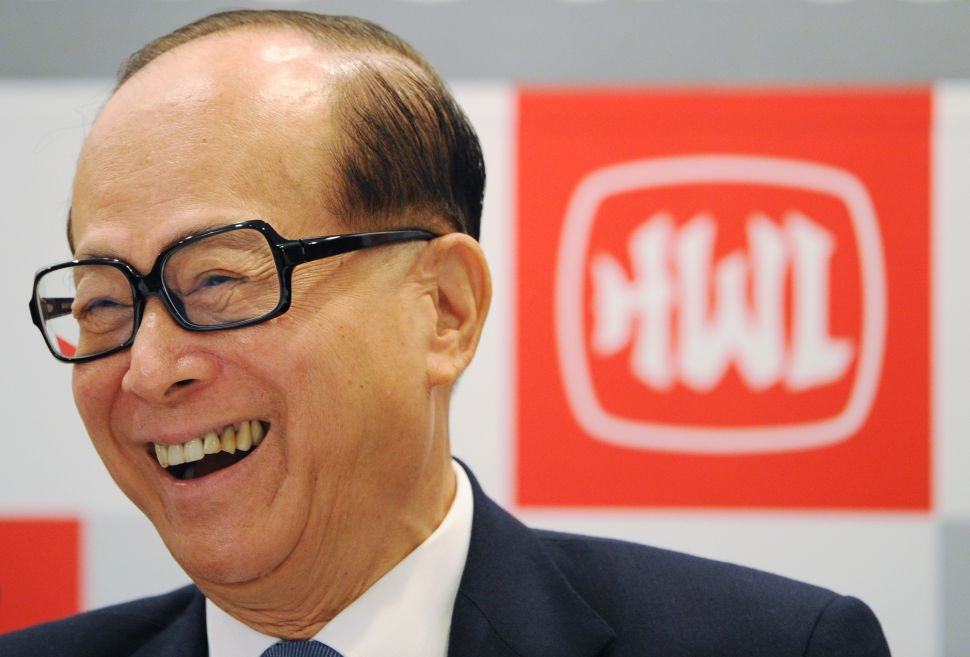